US won’t sell arms to Turkey, but gives freely to YPG, Erdoğan says 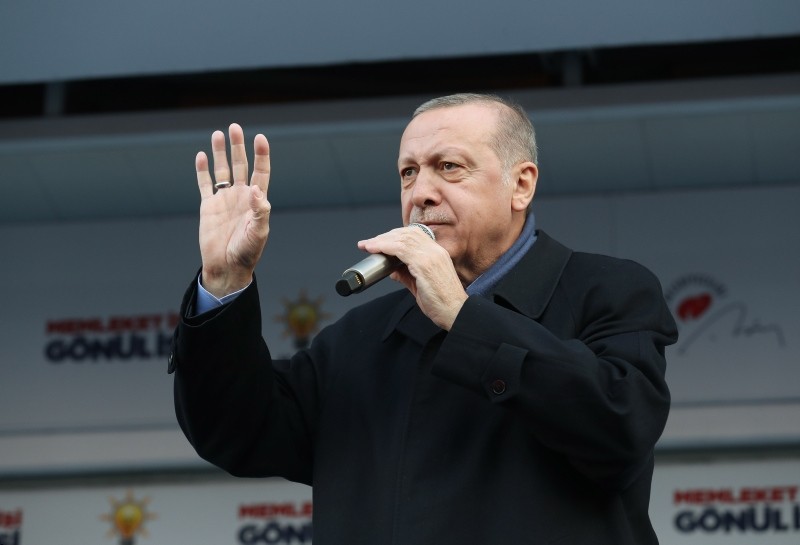 President Recep Tayyip Erdoğan on Monday slammed the United States for its continued support of the PKK-affiliated People's Protection Units (YPG) in Syria, calling on Washington to stand by promises it made to NATO ally Turkey.

"What kind of NATO alliance is this? You give terrorists around 23,000 truckloads of weapons and tools through Iraq but when we asked, you won't even sell them to us," Erdoğan said during an election campaign rally in southwestern Turkey's Burdur.

Erdoğan said Turkey expects Syria's Manbij to be cleared of YPG terrorists and to be left to local people as soon as possible, as promised.

The June 2018 Manbij deal between Turkey and the U.S. focuses on the withdrawal of YPG terrorists from the city to stabilize the region, which is located in the northern part of Syria's Aleppo province.

The president criticized countries "thousands of kilometers away" planning to conduct operations in Syria, while Turkey is constantly "under threat" with its 911-kilometer border with Syria.

Erdoğan said only those who side with Turkey will win in the region.

He reiterated Turkey's determination to fight terrorism in neighboring Syria, saying, "We will definitely deal a heavy blow to the terror organization soon."

In December, U.S. President Donald Trump announced that the U.S. would withdraw its troops from Syria, saying that Daesh was defeated. This development was quickly also interpreted as an intention to halt U.S. support for the Syrian Democratic Forces (SDF), which is an umbrella group consisting mostly of PKK-affiliated YPG terrorists.

Days after Trump's announcement, President Erdoğan pledged that Turkey will take over the fight against the remnants of Daesh in Syria but put the likely operation east of the Euphrates against the YPG on hold.

Since then, the discussion has included the establishment of a safe zone in northern Syria. Since the presence of the YPG just on the other side of the border is a direct threat to Turkey, officials in Ankara have been stressing that a safe zone, free from YPG terrorists, should be under the control of Turkey, which is the main party concerned in the issue.