Europe wary of Trump's call to take Daesh captives back 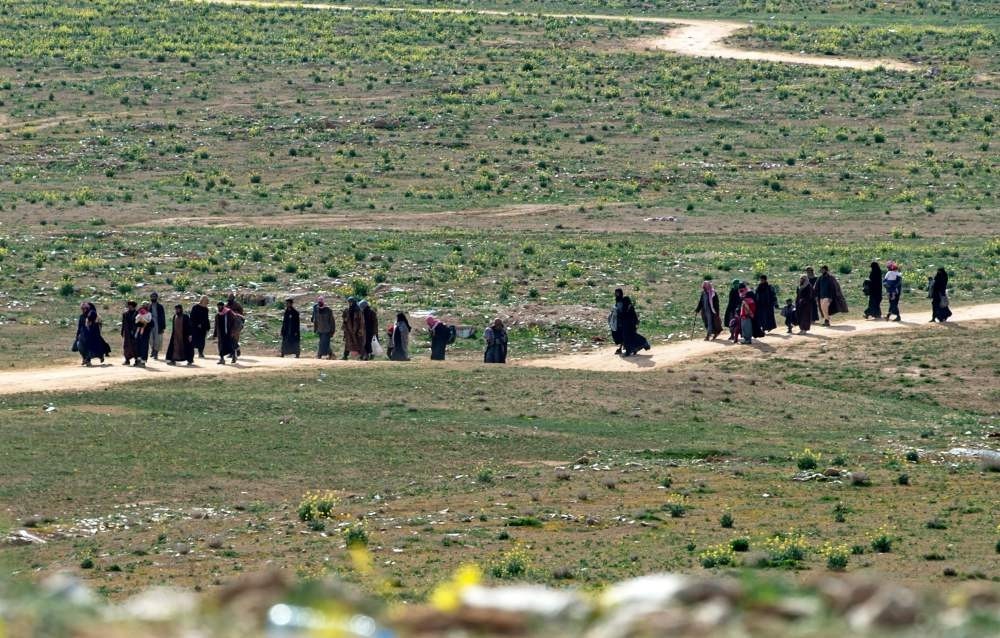 Europe did not welcome Washington's call to take back their nationals who fought for Daesh. Underlining that it would be extremely hard to implement, European leaders expressed their indifference on taking action on the matter

President Donald Trump's demand that European countries take back Daesh militants captured by the U.S.-backed PKK-affiliated groups in northern and eastern Syria is being approached cautiously by Europe. On late Sunday, Germany Foreign Minister Heiko Maas told German media that the U.S. president's request is "extraordinarily difficult to implement," since court proceedings need to be immediately launched to investigate the situation of German nationals asking to return. On Saturday, Trump tweeted: "The U.S. is asking Britain, France, Germany and other European allies to take back over 800 [Daesh] fighters that we captured in Syria and put them on trial. The caliphate is ready to fall. The alternative is not a good one in that we will be forced to release them."

Maas added that German laws give its nationals the right to re-entry, but the country would discuss the demand with Washington as well as its European partners, notably France and Britain.

"However, it is surely not as easy as [they are] imagining it in America," he said.

Trump's tweet prompted a reaction in other European capitals, including Paris and London, who have been indifferent to take action on the matter.

Foreign Minister of France Jean-Yves Le Drian, a country that suffered the most from Daesh attacks especially between 2015 and 2016, previously referred to the militants as enemies of the country, who should face justice either in Syria or Iraq, the countries they became captives in. French recruits consist of the largest contingent of the terrorist organization from Europe.

Russia, on the other hand, said the transfer of foreign terrorists from Syria must be performed in accordance with the respective U.N. resolution.

"These individuals are suspected terrorists, they are foreign terrorist fighters, this is the term in the U.N. Security Council resolution, and it contains a very clear list of steps to be taken against them when they fall into the hands of the respective countries fighting against terrorists," Russian Foreign Minister Sergey Lavrov said yesterday at a press conference.

"These criteria must be met, and the first absolutely essential step is transparency and the transfer of data on these individuals," he added. Speaking on the issue, Oytun Orhan, an expert on Syria, said Trump might be trying to get European countries more involved in Syria during the withdrawal process.

Many European countries, however, remain indifferent to the issue. For example, Belgium previously said that it would not make any great effort to secure the release of 12 citizens imprisoned in Syria and two in Iraq. Authorities of the Syrian Democratic Forces (SDF), a group predominantly led by the People's Protection Units (YPG) - the PKK's Syrian affiliate, also made an announcement on the issue yesterday, saying that they will not release Daesh detainees that they hold "but countries should do more to take them back."

According to an official from the group, the number of foreign Daesh fighters and family members in their custody grows by dozens each day, and the captives are representing "a time bomb" since 800 militants plus 1,500 children and 700 wives "could escape in an attack" on the YPG-led area.

The YPG often wields captive Daesh militants as a tool to secure its support from the U.S. and European countries.

In late December, after Trump announced Washington's withdrawal from Syria, a YPG official said the terrorist group is planning to release Daesh prisoners, The New York Times had reported.

"The best result of terrible options is probably for the Syrian regime to take custody of these people," the official was quoted as saying by the paper, adding that: "If they are released, it's a real disaster and major threat to Europe."

Similar to France, the British government said yesterday that the militants should be put on trial in places where they committed their crimes.

"Foreign fighters should be brought to justice in accordance with the due legal process in the most appropriate jurisdiction," a spokesman of Prime Minister Theresa May said. Yet, some EU countries expressed their objection more staunchly. Hungarian Foreign Minister Peter Szijjarto referred to the issue as "one of the greatest challenges ahead of us for the upcoming months." "Our major endeavor now should be not to allow them to come back to Europe," he told reporters in Brussels.