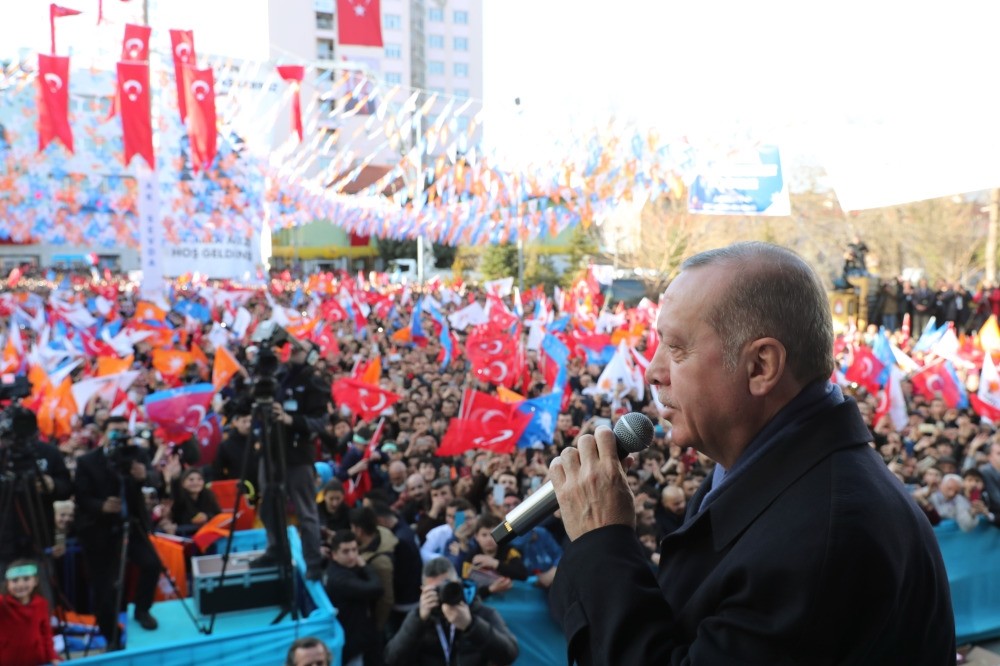 Turkey will not let a terror corridor be formed near its Syrian borders, Erdoğan said, underlining that to prevent any such formation, a military intervention east of the Euphrates is around the corner

President Recep Tayyip Erdoğan made it clear Monday that Turkey will completely root out the People's Protection Units (YPG) – the PKK terrorist group's Syrian affiliate – east of the Euphrates River. Emphasizing that this is a matter of survival for the country during a local election rally in southwestern Burdur province, Erdoğan said, "We will inflict a heavy blow to this terrorist organization tomorrow, if not today." He underlined that a military operation to clear its southern border region of terrorists will take place soon. Criticizing the U.S. for its stance against Turkish military operations in the region, Erdoğan added that as a neighboring country to Syria, Turkey has every right to intervene in the region to maintain its border security.

"The ones who came from thousands of kilometers away for [the preservation of] their security see themselves as the rightful owners. [Turkey] shares a 911-kilometer border [with Syria] and is supposed to not intervene?" Erdoğan asked while underlining that Ankara's security has to be understood clearly. "We will never stop doing what is necessary [to secure Turkey]. The only thing we want is support for our rightful struggle," he added. "The ones who are with Turkey will be the winners, not the ones who are against it," Erdoğan underlined.

In December 2018, Erdoğan announced that Ankara is in preparations for a third offensive in northern Syria, this time east of the Euphrates, which is dominated by the YPG.

TURKEY EXPECTS MANBIJ TO BE LIBERATED FROM YPG

Reiterating that the Manbij road map was agreed on with the U.S., the president said they expect the province to be cleared of terrorist elements as soon as possible.

"We know that millions of Syrians will return to their hometowns safely when Manbij and the east of the Euphrates are liberated from terrorists," Erdoğan said.

Since 2011, Turkey has received a constant flow of displaced Syrians fleeing the conflict and their numbers have expanded from mere thousands to millions. Currently, there are more than 3.5 million Syrian refugees in Turkey, which is the highest number in the world. Over 475,000 of these Syrian refugees came from YPG-controlled areas of the war-torn country.

In a bid to face the threats emanating from the presence of the YPG in Syria, Turkey seeks to fully implement the Manbij road map, which was first announced in early June 2018 and aimed to establish security and stability in the city by clearing out YPG forces. The deal envisages the withdrawal of the YPG from the city and joint patrols to be conducted by the militaries of both countries. YPG forces first acquired the city in 2016 with the help of U.S-led coalition forces. Reiterating that Turkey will not allow a terror corridor near its borders, Erdoğan expressed his wish to conduct this struggle against terrorism alongside the country's allies.

U.S. HAS NO RIGHT TO CRITICISE S-400 PURCHASE

The president's criticism over Turkey's allies, particularly the U.S., continued with the topic of purchasing the S-400 missile system from Russia, saying that Washington has no right to go against this purchase.

"They [the U.S.] tell us to change our mind about purchasing the S-400 missiles. Why would we?" he asked, reiterating the U.S.' reluctance to sell the Patriot missiles to Turkey.

Erdoğan also said that despite being an ally of Turkey, the U.S. dragged its feet on selling Patriots to Turkey while supporting the YPG terrorists with weapons.

"What kind of an alliance is this?" Erdoğan asked. "We have the right to use different [missile] systems."

Turkey's deal with Russia over the purchase of the S-400 defense missile systems has caused discomfort in Washington, claiming that the Russian-made systems could risk the security of some U.S.-made weapons and other technology used by NATO, including the F-35 fighter jets. "We have made the S-400 deal with Russia, so it is out of the question to take a step back. The deal is done. When it comes to the Patriots, we are open to buying them; however, this purchase needs to serve the interests of our country," Erdoğan said last week regarding the issue.

The Ankara-Moscow S-400 deal was inked in December 2017, when the parties signed a $2.5 billion agreement for two batteries of the systems - Russia's most advanced long-range anti-aircraft missile system. Turkey will be the first NATO member country to acquire the system. Moreover, Turkey seeks to build its own missile defense systems as the deal also involves the transfer of technology and know-how.

In December last year, the U.S. State Department approved the possible sale of the Patriot air and missile defense system, saying that Turkey continues to be an essential element of national security and defense strategy. This was regarded as a breakthrough move after Washington's delay of the F-35 jets to Turkey due to its purchase of the Russian-made S-400 defense system.

Ankara says, however, the two deals are not alternates to one another, and the conditions attached to their sale agreements must be dealt with separately.