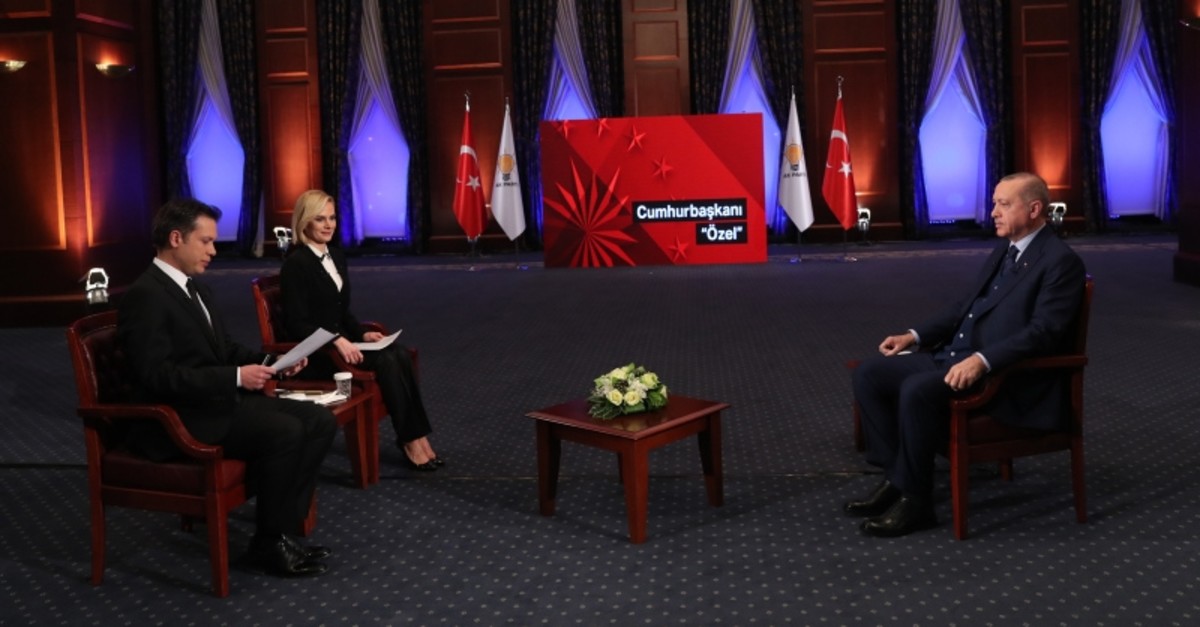 President Recep Tayyip Erdoğan asserted Tuesday that Ankara cannot entrust to others a region which could become a national threat to Turkey, underlining that without its efforts toward reaching peace and inputs to become an intermediary there could be no lasting solution to the Syrian crisis.

In an interview with Turkish broadcaster NTV, Erdoğan underlined that Turkey's main goal now was to completely clear the People's Protection Units (YPG) elements from Manbij, and make sure their weapons are taken back by the U.S. as promised.

However, he expressed disbelief in the fulfillment of that promise.

Ankara has long stressed the importance of the U.S. retrieving the weapons Washington has given the YPG, the U.S.' main partner against Daesh in Syria, which Turkey considers a terrorist organization. Turkey recognizes the PKK and the YPG as organically linked terrorist groups.

"The generals with him said that they have the serial numbers, and they will collect the weapons when all is done. I do not find this sincere," Erdoğan said in the interview.

"If this withdrawal becomes a stalling method, our approach will be different," he said, adding that 200 to 400 soldiers may stay, and 500 may stay from other U.S.-led coalition forces.

Last week, the United States said it would leave a small peacekeeping group of 200 American troops in Syria for a period of time after a U.S. pullout.

The decision to withdraw was announced after Trump spoke by phone to Erdoğan. A White House statement said the two leaders agreed, regarding Syria, to "continue coordinating on the creation of a potential safe zone."

"What is important to us is that Turkey will control the secure zone," the Turkish president told NTV. "We cannot leave the control to neither Germany nor France or America. I clearly told this to them."

Erdoğan also said he might meet with White House adviser Jared Kushner, Trump's son-in-law, in Turkey on Wednesday alongside Finance Minister Berat Albayrak, and the meetings would cover economic and regional issues.

Addressing concerns about Turkey's S-400 missile defense system deal with Russia, Erdoğan said going back on the deal was out of the question and Ankara would not change its course despite threats. He added that he hoped the U.S.' approach toward Turkey's purchase of the S-400s would change, saying that Ankara could also accept a good offer on U.S. Patriot missiles.

"Regarding the Patriot issue, if you [the U.S.] provide us good conditions, we are open to that as well. We have to work with alternatives," Erdoğan stressed.

U.S. and NATO officials have told Ankara that the Russian system cannot be integrated into the NATO air and missile defense system and that purchasing the S-400 system would jeopardize Turkey's purchase of Lockheed Martin Corp F-35 fighter jets and possibly result in U.S. sanctions.

"Relevant institutions are conducting necessary talks right now. They will continue to do so. They will also speak to Congress. I hope that this wrong approach [of the U.S.] will change," Erdoğan said.