US, its Syria proxy contradict each other over Daesh presence 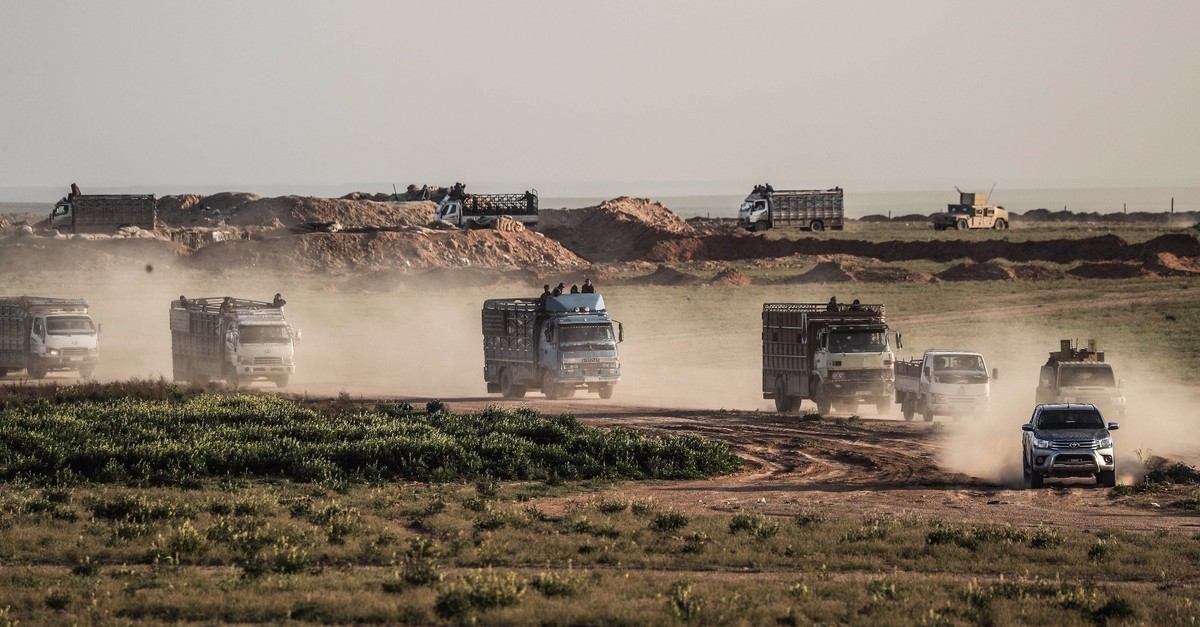 The U.S. claims Daesh has been completely eradicated from Syria, but its partner the YPG has stated that another week is needed in order to declare the defeat of the terrorist organization

The U.S. and the PKK's Syrian affiliate, the People's Protection Units (YPG), which have continued their steadfast partnership despite furious backlash from Ankara, have made contradictory statements over the presence of Daesh in Syria. All of the territory that was under the control of the Daesh terrorist group has been taken back by U.S.-backed forces, U.S. President Donald Trump said on Thursday. This claim contradicts the closely allied Syrian Democratic Forces (SDF), a terrorist organization led predominantly by YPG terrorists, which said a "complete victory" over Daesh would take another week.

"Now, it's 100 percent we just took over, 100 percent [of the] caliphate. That means the area, the land, we have 100 percent," Trump told troops at the Elmendorf Air Force Base in Alaska, U.S. "We did that in a much shorter time than it was supposed to be," he added.

The U.S. has been cooperating with the SDF, an umbrella group consisting mostly of terrorists from the YPG, under the pretext of fighting Daesh. The enduring partnership with the terrorist organization remains a source of tension between Washington and its NATO ally Ankara, which has suffered from the PKK's decades-old terrorist campaign against the Turkish state.

Being in contradiction with its ally in Syria, so-called SDF leader Ferhad Abdi Şahin, code named "Mazloum Kobani," said earlier Thursday that it might be too early to celebrate, claiming "the complete victory over Daesh in a week," in a video released to the press.

Trump announced in mid-December that the U.S. would withdraw its troops from Syria, noting that the only reason U.S. troops were in Syria was to defeat Daesh, which he said was accomplished, later saying that "local countries," including Turkey, should "take care" of the situation and deal with the remaining terror threat.

Even the Trump administration says U.S. troops are being withdrawn from the war-torn country, while "a small peace keeping group of about 200 will remain in Syria for a period of time," White House Press Secretary Sarah Sanders said Thursday in a one-sentence statement.

Turkey has criticized the U.S. for working with the YPG to fight Daesh in Syria, saying that using one terror group to fight another makes no sense.

The newly appointed U.N. special envoy to Syria, Geir Pedersen, called for an international forum that brings all warring parties together in Syria, excluding the SDF from the peace process on the grounds that they "are not part of the political process so far."

"I think this could turn into a challenge in the future, so it is important that we address this issue in a proper way," Pedersen said, separating Syrian Kurds from the terrorist organization and recognizing them as an integral part of the peace process.

Mentioning the significance of a sustained dialogue with Syria's Bashar Assad regime and the opposition forces "on building trust and confidence" to engage a wide range of Syrians and to achieve political settlement after the eight-year civil war, Pedersen said he hopes the parties can "convene a credible, balanced and inclusive constitutional committee as soon as possible."

"I am conscious of the need to end this conflict for the sake of Syria, the region and the world," Pedersen noted. "If we are to see how issues can be unblocked and how to help keep the parties moving in a Syrian-led and Syrian-owned process, a common forum where key states engage seriously on those issues may be needed," he underscored.

The U.N. envoy added that key international players "express emphatic support for a political settlement for Syria" and agree on the need to counter terrorist groups. "They share an appreciation of the realities of 2019 and that real diplomacy is needed to address them," Pedersen said, noting that currently "different formats make different contributions."

Pedersen expressed his hope that the parties could "finalize the rules of procedure and the composition of the committee in the near future." The presence of so many international forces inside Syria raises the danger of clashes, Pedersen warned, calling for better coordination between the parties. Commenting on the issue, Francois Delattre, France's U.N. envoy, said that an all-encompassing political solution is the sole remedy to prevent "a new black decade in Syria," calling U.N. security to unite with an aim of bringing peace and tranquility to Syria.