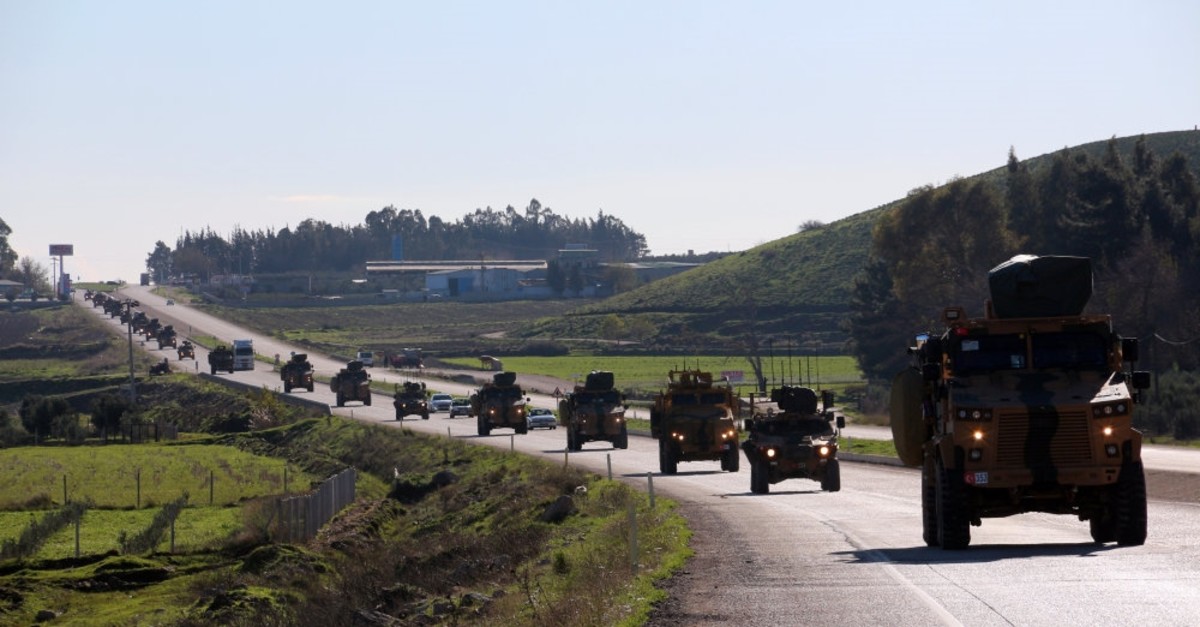 While Turkey continues diplomatic negotiations with the U.S. over a safe zone, Ankara has ensured all military preparations are made for a possible operation to clear YPG terrorists from its borders.
by Tuğçe Kılıç Mar 07, 2019 12:08 am

The U.S. may keep a number of troops behind in Syria as uncertainty lingers over a clear withdrawal plan in Washington. For Turkey, however, having control of a proposed safe zone in northern Syria remains a non-negotiable decision

Complete control over a safe zone planned in northern Syria to drive away the PKK-linked People's Protection Units (YPG) from the Turkish border remains a top priority for Ankara. "Each piece of territory that the YPG controls is a strategic threat to Turkey, and Turkey's utmost priority is to eliminate YPG control in these areas by using military force or through diplomacy," Oytun Orhan, from the Center for Middle Eastern Strategic Studies (ORSAM), said at a panel on the U.S. withdrawal and its effects on the situation in Syria.

Ankara has already demanded that the U.S. disarm the YPG before it withdraws and has proposed a "safe zone" 30 kilometers into Syrian territory along the border with Turkey, which would be under Turkey's administration, to curb the terrorist threat.

Yet, it is understood that Washington sees this safe zone as a buffer zone to protect its ally on the ground and seeks to deploy Western or international forces to supervise this zone, something Turkey cannot tolerate.

Noting that Turkey cannot make concessions on the control of the safe zone, Orhan said that Ankara thinks it should be the supreme authority in the safe zone; yet it may allow the symbolic presence of Western forces in the zone to appease demands. He, however, stressed that U.S. leverage against Turkey has been decreasing day by day.

President Recep Tayyip Erdoğan previously pledged to launch an operation east of the Euphrates and other areas under YPG rule. However, following Washington's announcement of its decision to withdraw from the country, the operation was put on hold. Since then, numerous officials, including Defense Minister Hulusi Akar, have been reiterating that preparations for the operation are ready, and they are waiting for the signal to go.

Meanwhile, U.S. President Donald Trump is in a tight spot in the face of mounting criticism from his own administration. According to a letter obtained by NBC News, Trump wrote that he now agrees "100 percent" with keeping some U.S. troops in Syria. Trump wrote this on top of a letter sent to him by a bipartisan group of senators and representatives dated Feb. 22. The letter noted that the lawmakers agree that a stabilizing force, which includes a small contingent of U.S. troops and ground forces from European allies, is essential to ensure stability and prevent the return of Daesh. In a paragraph that Trump marked in the letter, the group also wrote, "Like you, we seek to ensure that all the gains made in Syria are not lost."Kılıç Buğra Kanat, an academic and a Daily Sabah columnist, said during the panel, "U.S. citizens mainly vote for presidential candidates that focus on domestic politics rather than foreign policies and Trump understand this." Noting that for this reason, Trump wants to avoid "endless wars" and end the U.S. role as the "world's police," Kanat added that this decision to withdraw might be the harbinger of other withdrawals to come in the Middle East.

In December, Trump announced that the U.S. would withdraw its troops from Syria, saying that Daesh was defeated. Trump's swift decision came under fierce criticism suggesting that Daesh continues to be a threat and that the withdrawal is a betrayal of their ally on the ground, the YPG, which Turkey sees as a national threat.

In the face of heavy criticism, Trump later said that he did not have a specific time limit for the pullout, signaling an extension of the presence of U.S. troops on the ground.

Turkey sees the YPG as an extension of the PKK, which has claimed the lives of more than 40,000 people in its 30-year terror campaign against Turkey.

Ankara has been infuriated by U.S. support for the Syrian Democratic Forces (SDF), which is dominated by the YPG, under the pretext of fighting against Daesh. The U.S. provided military training and supplied truckloads of weapons to the YPG, disregarding warnings from Ankara that the YPG is organically linked to the PKK and that partnering with one terrorist group to fight another was not acceptable.

The YPG's ultimate goal is to establish an autonomous region in northern Syria by connecting the northwestern Afrin canton to the Ayn al-Arab and Jazeera cantons in the northeast. In response to the YPG threat near its borders, Turkey has launched two cross-border military operations along with Syrian moderate opposition groups in the past two years.