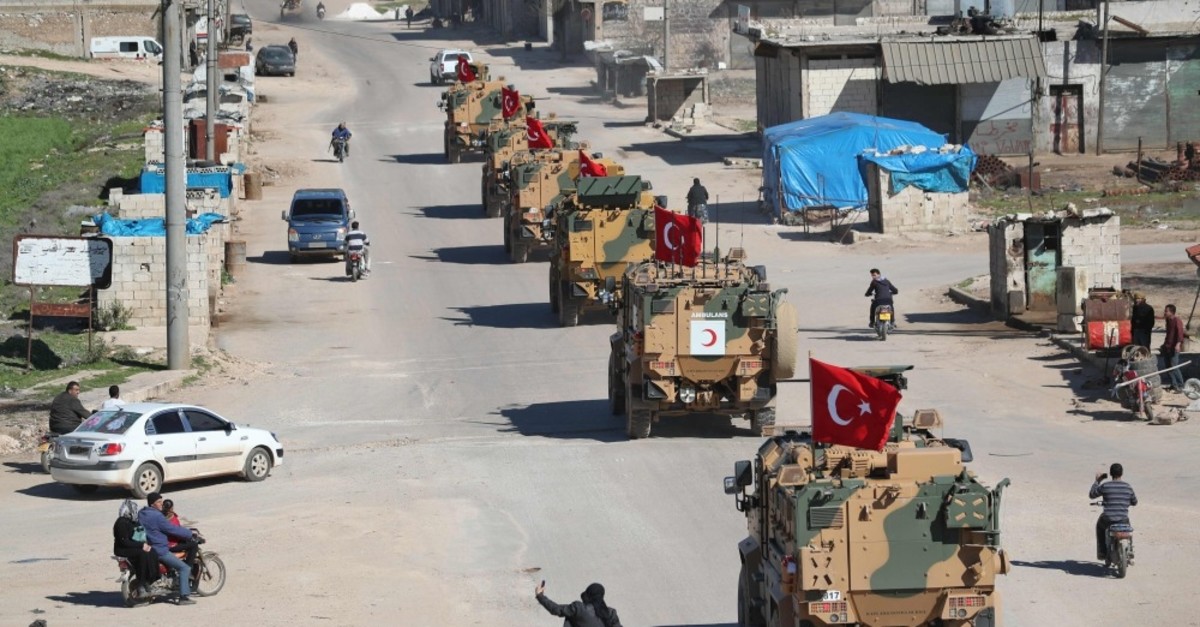 A convoy of armored Turkish military vehicles on patrol along a road in the de-militarized zone in Syria's northern Idlib province, March 8, 2019.
by Daily Sabah with Agencies Mar 09, 2019 12:19 am

Turkey launched joint military patrols with Russia in Idlib in northwestern Syria to maintain stability in the region and prevent the activities of radical groups. "We see joint patrols carried out by Turkey and Russia in Syria's Idlib as an important step for the continuation of the cease-fire and ensuring stability," Defense Minister Hulusi Akar said Friday at Anadolu Agency's Editor's Desk meeting. He also announced the lifting of all airspace restrictions in Idlib and Afrin as of Friday. The patrols will stretch from northern Idlib city to southern Aleppo.

The route of the patrol includes six points: Kafr Lusin and Al-Dana, districts north of Idlib; Atarib town west of Aleppo city; and Qammari, Qanater and Al-Eiss towns southwest of Aleppo city. Within the framework of the Astana agreement, Turkey currently holds 12 cease-fire observatory points in Idlib's de-escalation zone while Russia has 10 points. A cooperation platform launched in December 2016, by Turkey, Russia and Iran, laid down the grounds for their tripartite cooperation on a peace settlement in Syria known as the Astana process. Turkey and Russia also signed the Sochi agreement in September of last year to decrease tensions and avoid new conflicts in Idlib province.

While the existence of the former al-Qaida affiliated terrorist group, the Hayat Tahrir al-Sham (HTS) in Idlib, currently remain a vexing problem, Ankara has been pushing intense efforts for dissolving or demilitarization the HTS.

On the other hand, Bashar Assad regime's frequent attacks on the de-escalation zones in Idlib remain another factor undermining the cease-fire efforts.

Responding to a question on claims of Turkey's direct communication with the Syrian regime, Akar said such contacts are out of the question, adding that Turkey has had talks with Russia, and occasionally with Iran, when needed.

In February, President Recep Tayyip Erdoğan said Turkey and the Assad regime have only been conducting low profile contacts through its intelligence agencies.

Stressing that Turkey has never had any problems with the Kurdish population or other ethnicities in Syria, Akar emphasized that the Turkish military only strikes at terrorist nests in northern Syria to eliminate the terrorists of the PKK-affiliated People's Protection Units (YPG).

Turkish officials have been signaling an expansion of Ankara's military campaign into the much larger YPG territory east of the Euphrates if the threat continues. High-level officials in Ankara have also been discussing plans to establish a safe zone in northern Syria free from YPG terrorists to ensure national security.

Akar added that more than 300,000 Syrians returned to their homeland after Turkey's two cross-border military operations in northern Syria, emphasizing Turkey is the only state fighting Daesh on the ground and eliminating radical terrorists. He added that the existence of the YPG in Syria hinders the resettlement process of the refugees.

"The YPG's persecutions has been highlighted in United Nation reports. We are objecting the presence of the YPG in the region, which has no difference from the PKK, and pose a threat to security in Manbij," he said.

In order to prevent the PKK and its extensions from tightening their grip in northeast Syria and disrupting peace efforts in the region, Turkey aims to accelerate the process that was launched in June with the U.S. As part of the deal, Turkey and the U.S. agreed to work on the withdrawal of the YPG from Manbij. The aim of the Manbij deal is to ensure security and stability in the province by eliminating YPG terrorists who currently control the region in northern Syria and ultimately handing the administration of the province to a body consisting of local people. Ankara has been objecting Washington's support to the YPG under the pretext of fighting Daesh, saying supporting a terrorist group against another terror group makes no sense.

Yet, officials of the two countries have geared up talks since U.S. President Donald Trump's announcement of a withdrawal in December 2018. At the time, Trump announced the withdrawal of 2,000 U.S. troops from the conflict-ridden Middle Eastern country, but some U.S. officials have tried to water down the process since.

One of the pioneers of the efforts to slow down the withdrawal, Gen. Joseph Votel, chief of U.S. Central Command (CENTCOM), said the fight against Daesh is far from over.

"What we are seeing now is not the surrender of ISIS [Daesh] as an organization but a calculated decision to preserve the safety of their families and preservation of their capabilities," said Votel, adding that the insurgents are going to ground in remote areas, "waiting for the right time to resurge."

Speaking on the U.S.' withdrawal process, President Recep Tayyip Erdoğan said on Wednesday that the bureaucratic establishment in the U.S. has been hampering Trump's firm stance on Syria, which is a major problem for Turkey.

"There is an American establishment, which we can call the U.S. deep state. They are trying to block [the Syrian] process. Our problems will continue if the U.S. will not put an end to its ties with the YPG terror group," he said in a TV interview.

Some top military commanders of U.S., specifically those in CENTCOM, have a close relationship with top YPG terrorists on the ground, asserting that the fight against Daesh is not over and the protection of their allies, like the YPG, should be a priority.

The two countries' officials are also discussing the establishment of a 32-kilometer safe zone in Syria's eastern Euphrates region. Speaking on the issue, Akar said that complete control of the planned safe zone remains a high priority for Ankara to ensure its national security.

On the other hand, the YPG leaders announced that they want a multinational force to be deployed at the Turkish border, rejecting the creation of a large Turkish-controlled safe zone. Fawza Youssef told Reuters Friday that the YPG leadership have proposed their idea in talks with U.S. officials on the issue.