New Zealand terrorist will pay for his crimes, Turkey says 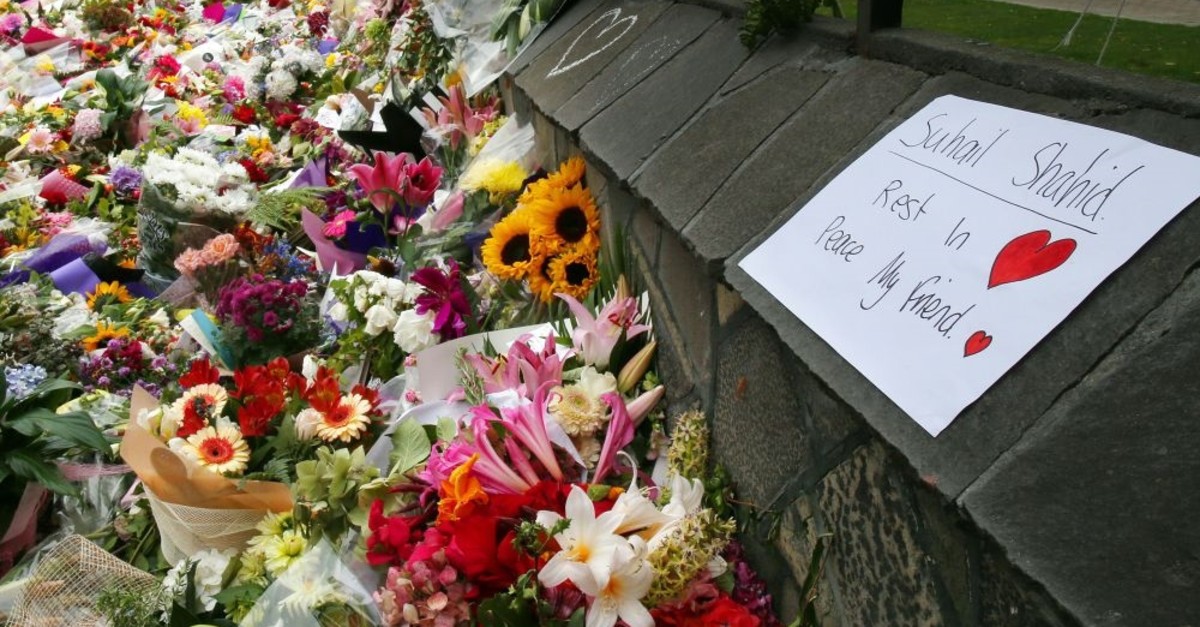 People pay tribute to the victims of the terrorist attacks against worshippers in Christchurch, New Zealand, March 19, 2019.
by Daily Sabah Mar 20, 2019 12:17 am

The New Zealand terrorist will be held accountable for his crimes, President Recep Tayyip Erdoğan said yesterday, amid reports claiming that he might avoid terrorism charges

Turkey is determined to make sure the New Zealand terrorist, who killed 50 people last week in an anti-Muslim attack, pays for his crimes, President Recep Tayyip Erdoğan said Tuesday. Speaking at a campaign rally in Turkey's Black Sea province of Zonguldak, Erdoğan said the terrorist will be held accountable for his crimes "one way or another."

"You will pay for this. If New Zealand doesn't do so, one way or another we will make you pay," said Erdoğan, following reports claiming that the terrorist might get away with his crimes. Various media outlets reported yesterday that the 28-year-old attacker Brenton Tarrant may avoid terrorism charges and instead face multiple murder charges over last week's massacre. The reports claimed that terrorism laws in New Zealand require an act to be done for political or ideological reasons, and intended to induce terror in a civilian population in order for it to be considered a terrorist act. The reports drew immediate criticism from many, who claim that such a move may overshadow the underlying ideologies behind the shooting – racism and xenophobia – and instead portray it as just another murder crime. "This isn't an individual act, this is organized," said Erdoğan during his speech about the attack.

At least 50 people were killed and about as many wounded when a terrorist opened fire on worshipers during Friday prayers at the Al Noor and Linwood mosques in Christchurch, New Zealand's third-largest city.

The massacre was livestreamed on social media and was accompanied by the release of a racist, anti-Muslim, manifesto that also attacked Turkey.

Tarrant has been called a "terrorist" by both New Zealand Prime Minister Jacinda Ardern and the police, as he appeared in court on Saturday and was charged with murder.

Meanwhile, in the aftermath of the incident, the issue of carrying weapons have come into the agenda of New Zealand's politics as Ardern has urged citizens to hand in weapons before new gun laws are introduced.

"Within 10 days of this horrific act of terrorism we will have announced reforms which will, I believe, make our community safer," Ardern said at news conference after her cabinet reached, in principle, decisions on gun reform laws in the wake of New Zealand's worst ever mass shooting.

While she said details were being worked through, the cabinet has been looking at a ban on semi-automatic assault rifles, tighter licensing rules and the issue of modified weapons.

"If anyone has a weapon that either they should not be in possession of or they have concern over the events of Friday, they are welcome at any time to surrender that weapon to police," Ardern said.

Following the statement by the prime minister, many New Zealand citizens have been handing in their semi-automatic assault rifles to the police.

"Until today I was one of the New Zealanders who owned a semi-automatic rifle. On the farm, they are a useful tool in some circumstances, but my convenience doesn't outweigh the risk of misuse," John Hart, a farmer and Green Party candidate from Masterton said on Twitter Monday.

"We don't need these in our country. We have make sure it's #NeverAgain," he added.

New Zealand's top online marketplace Trade Me Group said it was halting the sale of semi-automatic weapons in the wake of Friday's attack.

There are an estimated 1.5 million firearms in New Zealand, roughly one for every three citizens and more than double the rate in Australia.

Australia introduced some of the world's toughest gun laws after its worst mass killing, the 1996 Port Arthur massacre where a lone gunman killed 35 people using a U.S.-made staple of mass shootings in that country - the semi-automatic AR-15, the same weapon used in the Christchurch terror attacks.

Australia banned semi-automatic weapons and launched a national gun amnesty. Tens of thousands of weapons were handed in as laws were enacted to make it much tougher to own firearms.

There's no restriction on the number of guns or quantity of ammunition a licensed gun owner can have and pest control is legally considered a reason to own a military-style semi-automatic weapon.