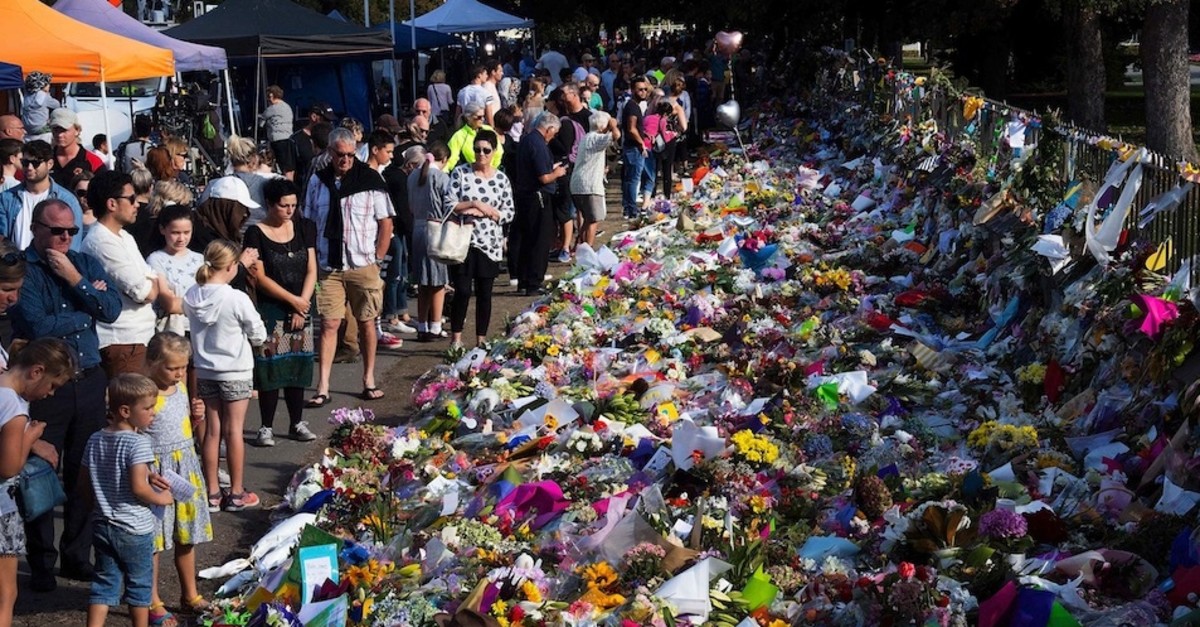 Floral tributes to those who were gunned down at the two mosques are seen against a wall bordering the Botanical Gardens in Christchurch, March 19, 2019.
by Nur Özkan Erbay Mar 21, 2019 12:01 am

The New Zealand mass shooter must get what he deserves, as there is no difference between him and the Daesh terrorists, Erdoğan says

Ankara demands that the terrorist, who killed 50 Muslim worshipers in a terrorist attack last week, receive his just deserts in the quickest way possible, highlighting the danger of mounting anti-Muslim acts in Western countries. On Tuesday, President Recep Tayyip Erdoğan addressed the 28-year old white supremacist terrorist during a rally, noting that he will pay for his crimes. "If New Zealand doesn't do so, one way or another we will make you pay," the president indicated.

The president's remarks were followed by a statement released by Parliament's Human Rights Commission, which announced that it would pay a visit to New Zealand to express solidarity with the country, showing Turkey's firm stance after the incident. "We will pay an examination visit to New Zealand to show solidarity with the victims of the inhumane massacre and the New Zealand government who approached the incident with a common sense worth of appreciation," Hakan Çavuşoğlu, the head of Parliament's Human Rights Commission, said in a statement. Speaking on the matter, Çavuşoğlu condemned the attacks and noted that mounting anti-Muslim acts all around the world left the U.N. and EU values of universal human rights unanswered for Muslims.

Urging the international community to recognize anti-Muslim acts as a crime against humanity, just like anti-Semitism, Çavuşoğlu emphasized that Ankara would continue to fight against anti-Muslim hate speech.

Visiting New Zealand is only one part of Turkey's efforts to bring justice for the victims of the terrorist attack. Writing an article for The Washington Post on Tuesday, President Erdoğan indicated that the intelligence services of the two countries are working together on the case.

"Turkish intelligence and law enforcement agencies, in cooperation with New Zealand and others, continue their efforts to shed light on what happened and to prevent future attacks," Erdoğan said.

"There is no difference between NZ terrorist and Daesh"

"We must establish that there is absolutely no difference between the murderer who killed innocent people in New Zealand and those who have carried out terrorist acts in Turkey, France, Indonesia and elsewhere," Erdoğan further said.

President Erdoğan rejected efforts to associate Christianity with terrorism and reiterated that the Christchurch terrorist, the 28-year-old white supremacist Brenton Tarrant, is "cut from the same cloth" as members of the Daesh terrorist group.

At least 50 people were killed and about as many wounded when a terrorist opened fire on worshipers during Friday prayers at the Al Noor and Linwood mosques in Christchurch, New Zealand's third largest city. The massacre committed by Tarrant was live streamed on social media and accompanied by the release of a racist, anti-Muslim, 87-page manifesto that also attacked Turkey and Erdoğan himself. Pointing out that after attacks by Daesh in Western countries, there was no shortage of Western politicians and commentators blaming the most deplorable acts of terrorism on Islam and Muslims, Erdoğan said: "As a leader who has repeatedly stressed that terrorism has no religion, language or race, I categorically reject any attempt to associate last week's terrorist attacks with the teachings, morals or maxims of Christianity. If anything, what happened in New Zealand was the toxic product of ignorance and hate."

Criticizing Europe and other parts of the Western world's silence on the massacre derived from radical anti-Muslim sentiments and xenophobia, Erdoğan stressed that to prevent future assaults similar to the one in New Zealand, one has a responsibility to reject the normalization of racism and xenophobia and that twisted ideologies, like anti-Semitism, amount to crimes against humanity.

He also praised New Zealand Prime Minister Jacinda Ardern for her exemplary attitude in the aftermath of the terror attack and invited other leaders to learn from the courage, leadership and sincerity of Ardern in regard to embracing Muslims living in the country.

Another delegation from the main opposition Republican People's Party (CHP), consisting of three deputies, visited the country yesterday. The deputies visited the injured in hospital and placed a wreath at Al Noor and Linwood mosques.

Envoy: NZ to do everything to restore sense of security for migrants

Anti-Muslim hatred is not a new phenomenon and actually has been on the rise for years. Far-right extremism and xenophobia fuel anti-Muslim hatred in Europe where terror attacks by Daesh and al-Qaida are used as an excuse to legitimize those views. By contrast, attacks against Muslims and their places of worship are downplayed as individual deviance instead of referring to them as terrorism.

However, Tarrant was called a "terrorist" by both Ardern and the police, as he appeared in court on Saturday and was charged with murder. If Tarrant were to be charged under the Terrorism Suppression Act (TSA), he would become the first person to be charged under New Zealand's anti-terrorism laws.

The New Zealand ambassador to Turkey indicated that the country would bring the perpetrators of the Christchurch terrorist attack to justice in line with the rule of law and do everything they can to help the Muslim community feel safe again.

Ambassador Wendy Jane Hinton told Daily Sabah that this incident has destroyed the sense of security felt by Muslim people who previously enjoyed a diverse but cohesive society that they are part of. However, Hinton indicated New Zealand and the people of New Zealand would do everything to support and reinstate this sense of security for future generations.

Hinton also stated that New Zealand has absolute respect for the rule of law and a strong sense of right and wrong; thus, the perpetrator will receive the most appropriate punishment in line with legal regulations embedded in legislation.

Meanwhile, Australian Prime Minister Scott Morrison announced that he would summon Turkey's ambassador in Canberra to discuss the remarks made by Erdoğan about the attack. "I find it a very offensive comment; of course, I do, and I will be calling in the Turkish ambassador today to meet with me to discuss these issues," he said.

During his election rally, Erdoğan suggested that anyone who comes to Turkey with anti-Muslim sentiments would suffer the same fate as soldiers at Gallipoli.

Diplomatic sources told media outlets that Foreign Minister Mevlüt Çavuşoğlu spoken with Australian Foreign Minister Marise Payne on the phone yesterday but no detail has been released on the content of the conversation.