Unlikely to face terrorism charges, NZ must not let attacker get away with his crimes 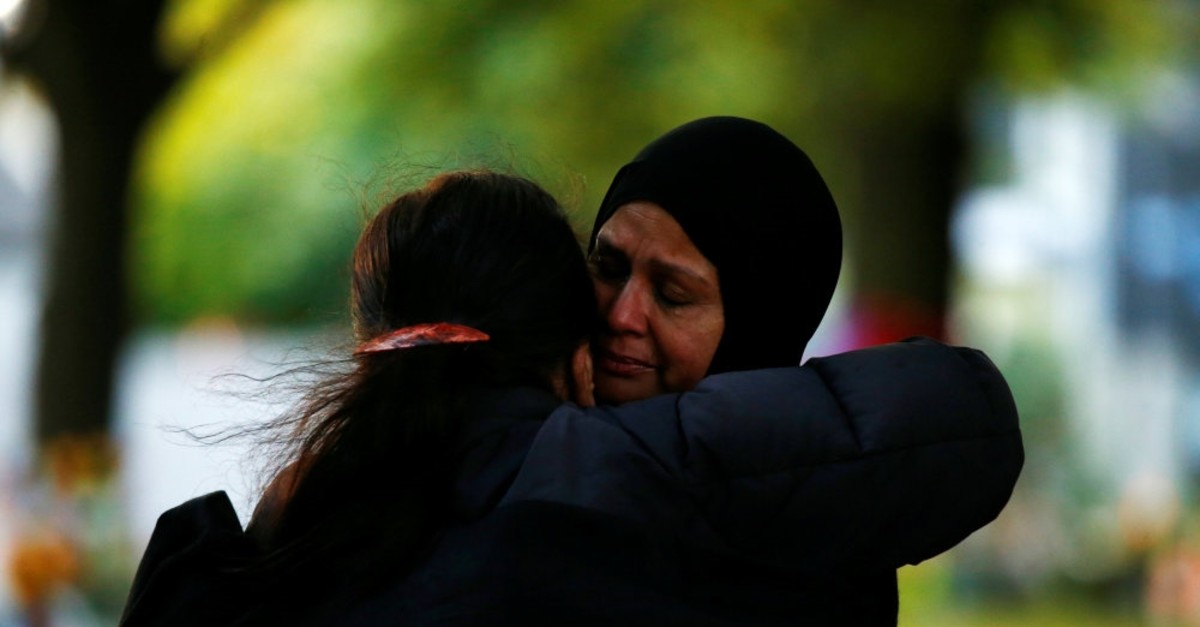 The blurred definition of terrorism in New Zealand's legal system triggers doubts about the legal procedures the anti-Muslim terrorist is expected to face, raising concerns that he might not pay the full price for his crimes

Last week was marked by one of the most brutal anti-Muslim terrorist attacks in history in Christchurch, New Zealand, as 50 Muslims were killed in a twin mosque attack by a white supremacist terrorist.

While the brutal massacre has resurfaced discussions about rising anti-Muslim and xenophobic violence in the Western world, the legal consequences and the framework of how Christchurch terrorist Brenton Harrison Tarrant will be judged has become a matter of debate.

Although there seems to be agreement that the incident should be categorized as a terrorist attack, New Zealand's criminal law necessitates that one must be a member of a terrorist organization to face terrorism charges. Although the attacker having possible links to a terrorist group has not been completely eliminated yet, one still can't help but ask: Will the NZ terrorist get what he deserves under current laws?

Mahmut Koca, the dean of the Law Department of Istanbul Şehir University, is of the opinion that although the action can be described as a terrorist act by its nature, as far as criminal law is concerned, certain criteria should be fulfilled for the act to be legally recognized as a terrorist crime.

"Being a member of an organized criminal group is a must for one to face terrorism charges," confirmed Koca, noting that there is a similar legal restriction in Turkish criminal law as well.

Following the terrorist attack, various media outlets reported that the 28-year-old terrorist, who livestreamed his massacre on social media accompanied by the release of a racist, white-supremacist and anti-Muslim manifesto, may avoid terrorism charges and instead face multiple murder charges because of the terrorism laws in New Zealand. According to criminal law in New Zealand, for one to face terrorism charges, he or she should be a member of an organized criminal group that has been committing offenses that are punishable by at least four years and have at least three people. Yet, even if these are proved, the punishment for being a member of a terrorist organization is 10 years of imprisonment at maximum. However, a murderer may face imprisonment for life.

The reports drew immediate criticism from many, who claim that such a move might possibly trivialize the incident and overshadow the anti-Muslim aspect of it as an attack against humanity. Besides, failing to label such a violent act as terrorist action may cause the punishment to lose its power over possible similar actions in the future.

Although in terms of the duration of the punishment, murder charges are the ultimate option in New Zealand law, there is concern over the shooter only facing murder charges that might overshadow the underlying ideologies behind the shooting, racism and xenophobia, and instead, portray it as just another murder.

According to Ersan Şen, a lawyer with expertise in criminal law, the attack in New Zealand is definitely a terrorist act and a crime against humanity since it targeted a certain group of people because of their identity. "Yet," Şen also confirmed, "to charge the perpetrator with the terror crime, his action must be in accordance with New Zealand's legal definition of a terrorism act."

In own his manifesto, Tarrant asks himself whether or not what he has committed is a terrorist act, and he responds that "Yes, it is."

Terrorism, by definition, is commonly understood to refer to acts of violence that target civilians in the pursuit of political or ideological aims. However, international law has yet to adopt a comprehensive definition of terrorism, existing declarations, resolutions and universal "sectoral" treaties relating to specific aspects of it defining certain acts and core elements.

According to a 2008 report by the United Nations High Commissioner for Human Rights, Human Rights, Terrorism and Counter-terrorism: Fact Sheet No. 32, the U.N. General Assembly has been working to adopt a comprehensive convention against terrorism that would complement existing sectoral anti-terrorism conventions. Its draft article 2 contains a definition of terrorism. According to the definition, an act of terrorism should include "unla

wfully and intentionally" causing, attempting or threatening to cause: death or serious injury to any person; or damage to public or private property, places, facilities, or systems, "when the purpose of the conduct, by its nature or context, is to intimidate a population, or to compel a government or an international organization to do or abstain from doing any act." Since each country's legal system and criminal code are developed out of cultural and historical backgrounds and necessities, Şen said that the reason why there is such a lack in the country's laws might be the fact that it is the first time that New Zealand has experienced such a bloody massacre. "New Zealand's criminal code may not have the capacity to deal with such a case since the country had never needed to have such laws," Şen noted.

A third option: Judging hım with crimes against humanity

Still, according to Koca, there might be a third option in which the attacker is judged with neither mass murder nor terrorism but instead crimes against humanity, such as genocide. However, the current state of New Zealand's criminal law does not deal with such crimes and thus does not have an outline on how a person who committed crimes against humanity should be charged.

Norway attacker was charged with terrorism

Although the New Zealand terror attack was treated as an "isolated incident" committed by a "lone wolf," terrorist attacks by far-right extremists are clearly part of a broader pattern. According to the Global Terrorism Index 2018, the death toll from terrorist attacks associated with far-right groups or individuals has been steadily rising in recent years. In the United States, right-wing extremists have carried out far more attacks than any other group. Yet, the 2011 far-right terrorist attack in Norway was probably one of the most striking incidents of all, which also inspired the one in New Zealand.

In his manifesto, Tarrant wrote that he had only one true inspiration: The Norwegian far-right political terrorist, Anders Breivik, who killed 77 people in the 2011 terror attacks in Norway.

Yet, unlike Tarrant, during the trial of his "inspiration," Breivik, there was no discussion concerning whether he was a terrorist as it was certain that he would be judged with terrorism charges. He was charged with violating paragraph 147a of the Norwegian criminal code, "destabilizing or destroying basic functions of society" and "creating serious fear in the population," both of which are acts of terrorism under Norwegian law.

In spite of debates about his mental health, which questioned the extent of the defendant's criminal responsibility for these attacks, the court found Breivik to be sane. At the end of the trials, Breivik was adjudged sane and sentenced to containment, a special form of a prison sentence that can be extended indefinitely, with a time frame of 21 years and a minimum time of 10 years, the maximum penalty in Norway.

However, according to Şen, if New Zealand decides to revise their criminal laws now, since every crime is judged in accordance with the laws of the time when they were committed, it would not mean anything in the case of Tarrant. "It is time for the international community to come up with a joint terrorism law that includes the harshest punishments and act together in each case related to terrorism, without any discrimination," Şen said.