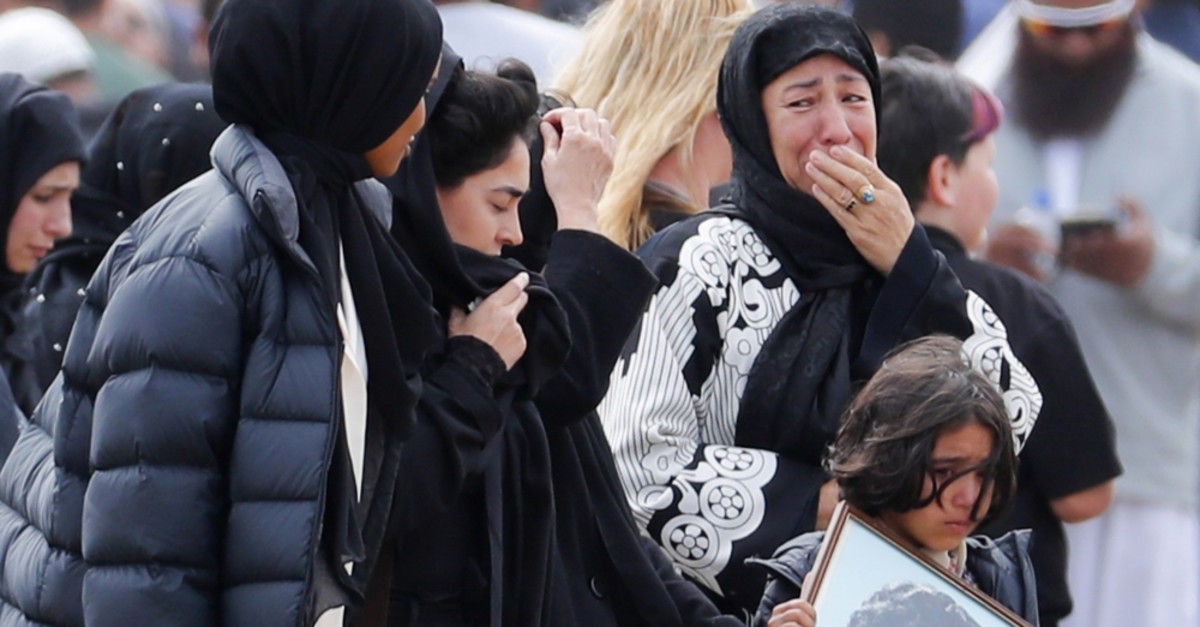 Mourners arrive for the burial service of one of the victims from the March 15 terrorist attack, at the Memorial Park Cemetery in Christchurch, March 21, 2019.
by Daily Sabah Mar 26, 2019 12:09 am

As commemorations continue for the victims of the terror attacks at two Christchurch mosques during Friday Prayer on March 15, efforts continue to be exerted to shed light into all aspects of the attack. In the latest move, New Zealand's Prime Minister Jacinda Ardern said a Royal Commission of Inquiry, which is the country's highest form of investigation, will conduct the inquest.

Ardern said on Monday that "It is important that no stone is left unturned to get to the bottom of how this act of terrorism occurred and what, if any, opportunities we had to stop it."

Accordingly, Ardern highlighted that the cabinet agreed on Monday a Royal Commission of Inquiry "will look at what could have or should have been done to prevent the attack."

The brutal massacre that took place on Mach 15 in Christchurch in New Zealand. Fifty Muslims were killed during the attack and as many injured by terrorist Brenton Tarrant, a 28-year-old Australian-born man. Tarrant killed worshipers in cold blood in the Al Noor and Linwood mosques in Christchurch, including four children younger than 18.

Another immediate step by New Zealand in response to the attack was the banning of sales of "military-style" semi-automatic and automatic weapons like the ones used in the terror attacks.

Motto of NYC Protest: Terrorism has no religion

The incident has been internationally condemned and various protests were held calling for steps against anti-Muslim sentiments. On March 24 a protest against Islamophobia following the attacks at Christchurch in New Zealand was held in Times Square in New York. Muslims, Christians and Jews gathered in the famous square to commemorate the victims. During the demonstration, people carried out banners that read "Islam is peace," and "terrorism has no religion." Muslims also prayed outside the Time Warner Center.

As the shocking incident prompted an international outcry, the Organisation of Islamic Cooperation (OIC) took the decision to hold an emergency meeting in order to discuss the issue in Turkey last week. Praising the reaction and empathy shown by Ardern following the attack, President Recep Tayyip Erdoğan said that Ardern's stance should be an example to world leaders.

New Zealand's Foreign Minister Winston Peters was also among the attendees of the meeting, who was in Turkey for, in his words, "substantial" talks. Expressing that his country places great importance on freedom of religious belief, Peters called attacks on Muslims "attacks on all of us."

The terrorist left a manifesto behind which showed that the attack was motivated by deep-rooted anti-Muslim and xenophobic sentiment often targeting Turks in Europe. The terrorist also visited Turkey twice in 2016 according to Turkish officials, who said they were evaluating the possibility that the terrorist would have come to the country to carry out a terror or suicide operation.

The Turkish Justice Minister Abdulhamit Gül said yesterday that the Turkey visit of the terrorist was beyond touristic travel. "It is obvious that visit of the person, who perpetrated the incident in New Zealand, to Turkey is beyond a touristic visit," Gül told Anadolu Agency's Editors' Desk.

The manifesto of the terrorist has a part titled "to Turks," where the writer threatens to kill all Turks living on the European side of Turkey and elsewhere in Europe. The text defines the area where Turks would be allowed to live peacefully as the "east side of the Bosporus."

"We are coming for Constantinople and we will destroy every mosque and minaret in the city. The Hagia Sophia will be free of minarets and Constantinople will be rightfully Christian [sic] owned once more," the text continues.

Following the threats of the terrorist toward Turks and Istanbul, Erdoğan on Sunday voiced the possibility of reverting the Hagia Sophia, which has been used as a museum since 1935 and is considered one of the world's wonders, to a mosque.

"This is not unlikely. We might even change its name to Ayasofya Mosque," Erdoğan said during a live interview with Turkish broadcaster TGRT.

"This is not a strange proposal," he said regarding the calls to convert the historical building to serve the purpose it did for half a millennium.

"As you know, the mosque was converted to a museum in 1935, as a reflection of the (Republican People's Party) CHP mentality. We may as well take a step and change that," he concluded, pointing to the harsh secularist policies of the 1930s CHP, which is the main opposition party currently.

In an election rally over the weekend, Erdoğan also highlighted that "We don't take action because the despicable [terrorist Brenton Tarrant] said so," referring to the attacker's specific references to Turkey and the Hagia Sophia in Istanbul.

The Hagia Sophia was built in the 6th century during the Christian Byzantine Empire and served as the seat of the Greek Orthodox Church. It was converted into an imperial mosque with the Ottoman conquest of Istanbul in 1453. The structure was converted into a museum during the strictly secular single-party rule in 1935, but there have been discussions around converting it back to a mosque, with public demands to restore it as a place of worship gaining traction on social media.