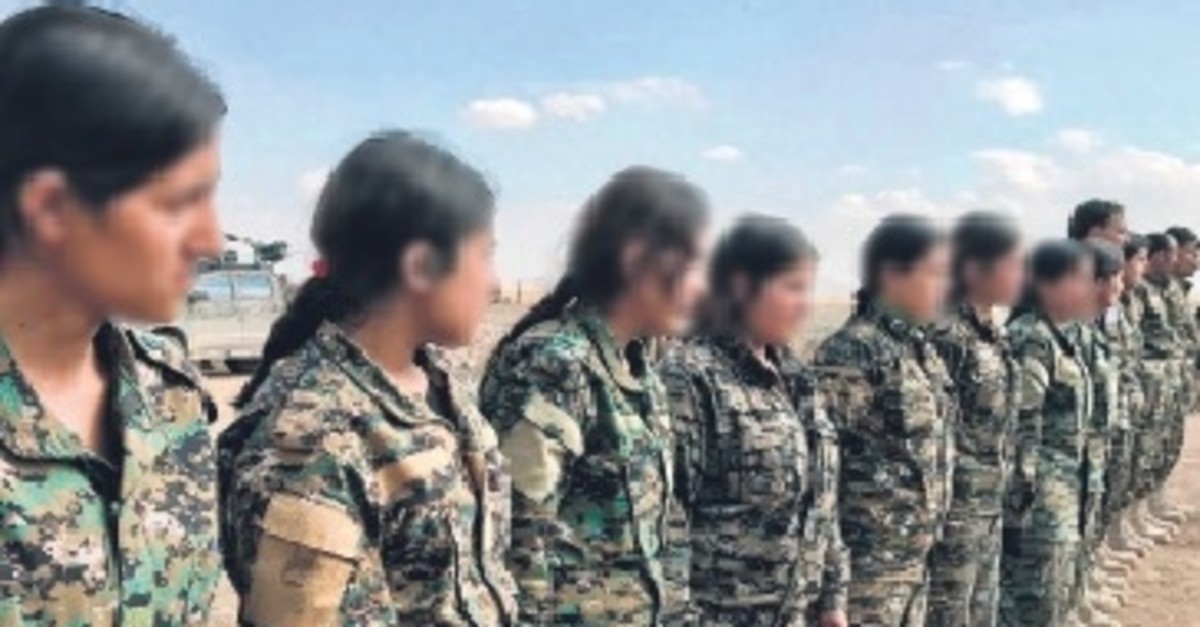 The YPG turns children and youngsters into drug addicts so they can later be used as fighters and suicide bombers.
by Tuğçe Kılıç Apr 20, 2019 12:18 am

The PKK's Syrian affiliate, the People's Protection Units (YPG), has increased efforts to recruit more children in the face of Turkey's imminent operation east of the Euphrates and Ankara-Washington negotiations on a safe zone to eliminate the terrorist organization. Citing security sources, Anadolu Agency (AA) reported late Thursday that the group set up a special unit in YPG-controlled territories to search for children and youths to take up arms.

Pointing out that following the Olive Branch and Euphrates Shield cross-border operations into northern Syria, the source noted that YPG recruitment peaked, taking at least one young person from every house in the Hasakah region, which is mostly populated by Arabs.

To ensure the commitment of the children, the YPG makes children and youngsters addicted to drugs, so they can later be used as suicide bombers and fight on the front lines. The AA noted that families who want to get back their children are threatened and exposed to deadly acts by the organization.

In relation to the issue, Murat Aslan, an academic at Hasan Kalyoncu University, told Daily Sabah: "The YPG's affiliate in Turkey had long recruited children in the southeastern region of the country in the past. But no

w their propaganda and methods do not work in Turkey. Thus, they use these methods in Iraq and Syria where people have not witnessed the true face of the terrorist organization." Stressing that the group used two different tactics in Turkey, Aslan said that the YPG recruited children via propaganda, promising job opportunities and brainwashing with ideologies or children of families who failed to pay their tributes. He added that the YPG now uses the same means to recruit children in Syria by promising them job opportunities after security and a new order is established in the country.

Turkey sees no difference between the PKK, a group listed on the U.S. and EU terror lists, claiming the lives of more than 40,000 people in a 30-year terror campaign, and the YPG in Syria, as the two groups are organically linked and have fluid movement of members between their lines.

Recruiting children is a violation of Children Rights and Human rights, recognized by the U.N. and a war crime under international law. Yet, despite having signed a pledge of commitment with an international organization in June 2014 to demobilize all fighters younger than 18 years old, the YPG recruited and trained children as young as 12 years old in 2016. In 2018, a U.N. annual report on children in armed conflict revealed 224 cases of child recruitment by the YPG between January and December in 2017, a fivefold increase compared to previous years.

Human Rights Watch also documented that the terrorist organization continues to recruit children despite objections from families and children while preventing families from getting in touch with their children. The organization documented 59 children soldiers between the ages of 10 and 15, adding that the YPG confirmed integrating children into the organization.

Meanwhile, according to local sources speaking to AA, Russian consultants and regime forces are meeting with the YPG in northwestern Syria's Tel Rifaat.

Sources said that the regime forces can freely enter the city through YPG checkpoints and hanged their flags in some buildings and on a hill a week before. The sources underlined that the terrorist organization aims to cement its power in the city with cooperation.

Commenting on the rapprochements between the YPG and the regime, Aslan emphasized that the terrorist group is trying to keep the balance of powers by establishing cooperation and to lay the groundwork for "legitimacy." However, he noted that the cooperation between them is most likely to fail due to their divergences on the autonomy of the YPG. Tel Rifaat has been under the control of the terrorist organization for 3 years. Since the beginning of YPG control of the city, it has forcefully displaced 250,000 Arab inhabitants and settled Kurdish families. Currently, 15,000-20,000 people live in the city, while only 700-800 of these people are the original settlers before the terrorist organization.

The YPG also has been using the city as a military base to attack territories previously liberated by Turkey. Ankara is also trying to expand liberated areas by setting up a safe zone for the people of Syria following the U.S. withdrawal from the region. In relation to the issue, Presidential Spokesperson İbrahim Kalın highlighted that such s safe zone has already been formed de facto in these territories. The YPG is heavily backed by Washington under the pretext of fighting Daesh. The power vacuum sparked by the Syrian Civil War gave the YPG an opportunity to practically apply its form of governance and form communes as dictated by its ideology. After Daesh was cleared from the region, the YPG tightened its grip by establishing a de facto autonomous region in Syria.

Washington and Ankara have been discussing the possibility of setting up a 32-km deep safe zone, free from all terrorist elements, including the YPG, along the Syrian-Turkish border after Washington's pullout from the country. Ankara asserts that the safe zone should be administrated by Turkey to ensure full elimination of security concerns.