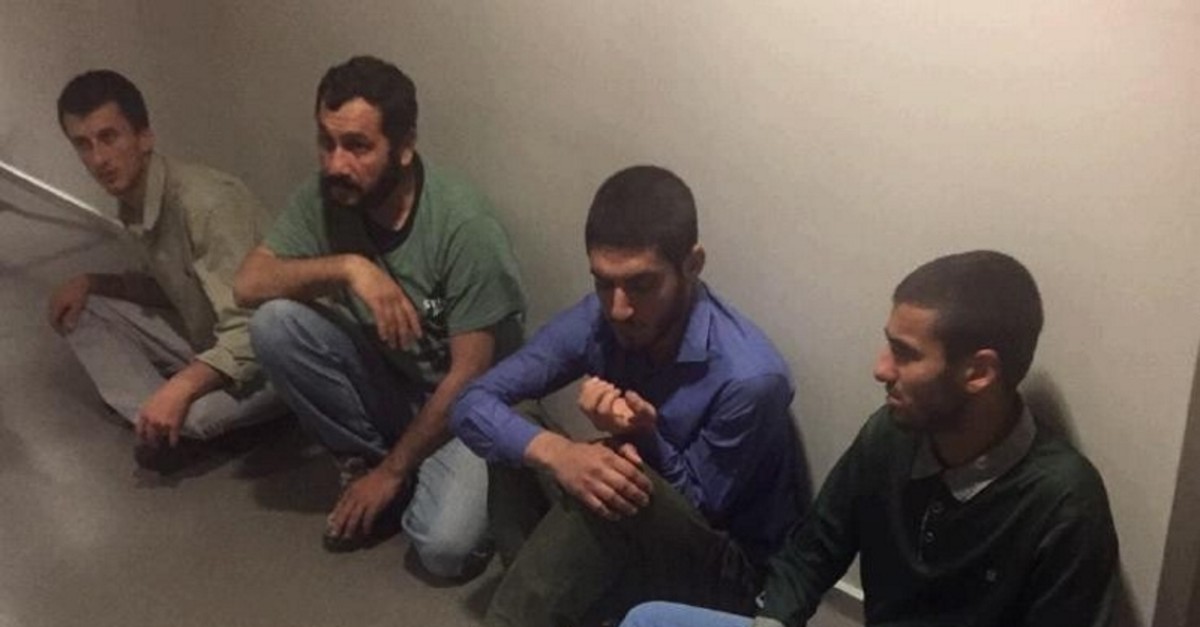 Four PKK terrorists nabbed by security forces at Iraq's Mount Sinjar have been brought to Turkey as part of an operation by the Turkish intelligence services, reports said Monday.

The terrorists were reportedly brought to Turkey and handed over to counterterror police on Thursday.

Identified by their initials as V.K., M.K., A.Ö., and K.İ., the terrorists had received training from the People's Protection Units (YPG) in Syria and crossed the border to Iraq.

V.K. reportedly joined the PKK in 2010 and was responsible for carrying out attacks against the Turkish Armed Forces near Sinjar region.

The terrorist was in hiding after he raped a disabled 11-year-old Yazidi child in March.

The operation is a prominent example of Turkey's counterterrorism efforts and the country's capability to fight security threats outside its borders. In fact, Turkey has been able to use its full capacity to eliminate terror groups in their compounds in the last few years, which has also helped eliminate other terrorist organizations, like the Gülenist Terror Group (FETÖ).

Rıza Altun, a senior figure close to the PKK terror group's acting leader Cemil Bayık and head of the terrorist PKK's international network, was severely wounded, while three other senior terrorists were killed in a joint Turkish intelligence and army operation in northern Iraq's Qandil mountains.

Turkey has long been stressing that it will not tolerate terror threats posed against its national security and has called on Iraqi officials to take the necessary steps to eliminate the terrorist group. Ankara has also previously underlined that if the expected steps are not taken, it will not shy away from targeting terror threats, particularly in Sinjar.

The TSK regularly conducts cross-border operations in northern Iraq, a region where PKK terrorists have hideouts and bases from which to carry out attacks in Turkey. In mid-2014, the PKK managed to establish a foothold in Sinjar on the pretext that it was protecting the local Yazidi community from Daesh. Since then, the PKK has reportedly established ground in Sinjar as a new base for its logistical and command and control activities. Iraq's Kurdish Regional Government (KRG) previously said that the PKK's presence in Sinjar is unacceptable and called for the militants to leave the area.

Moreover, a number of key FETÖ members have been brought to Turkey, especially from Balkan countries, by Turkish intelligence operations. FETÖ and its U.S.-based leader Fetullah Gülen orchestrated the defeated coup of July 15, 2016, where 251 people were killed and nearly 2,200 injured. Ankara also accuses FETÖ of being behind a long-running campaign to overthrow the state through the infiltration of Turkish institutions, particularly the military, police and judiciary.

"We buried our four martyrs today. Erhan Çiyapul was 22, Murat Şahin 25, Yener Kırıkçı 26 and Şevket Çetin was 27 years old. We will never forget them. Our state will bring the PKK, its sponsors and supporters into account," Altun tweeted.

Altun also stated that Turkey's war on terror will continue until the end, referring to Turkey's latest cross-border operations against the PKK on Mount Sinjar in northern Iraq.

"We will not allow anyone to destroy our unity," he underlined.