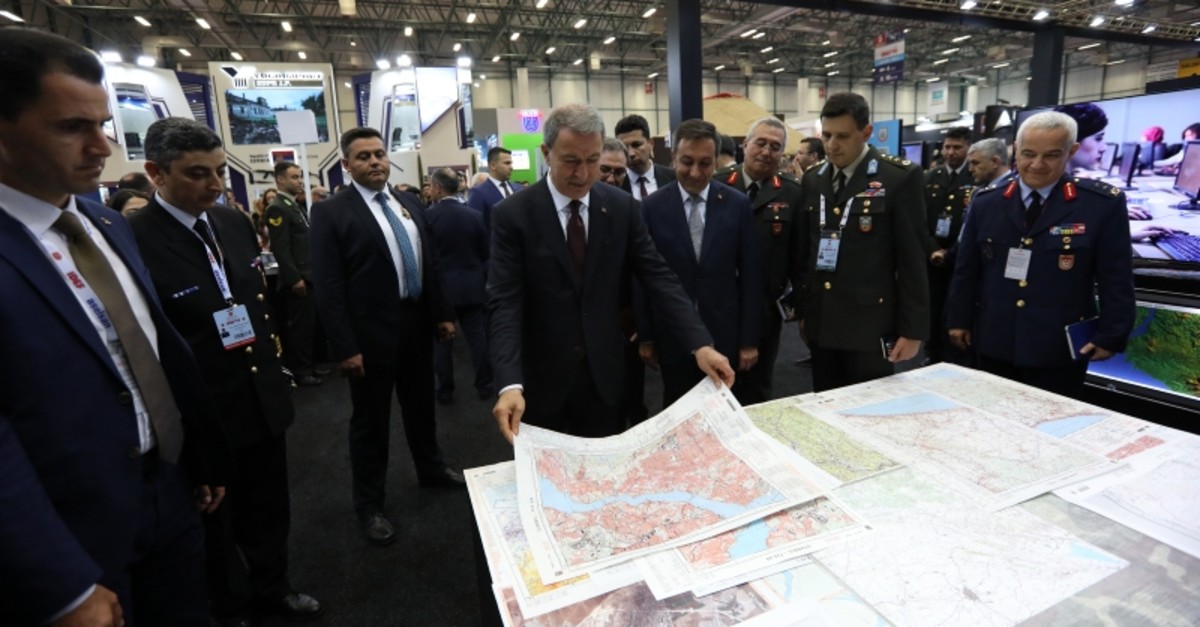 The U.S. has moved closer to Turkey's position in Syria and showing some flexibility in its approach to a planned safe zone to be established in northern parts of the country along the border with Turkey, Defense Minister Hulusi Akar said Friday.

In a private interview with broadcaster NTV at the IDEF'19 International Defense Industry Fair in Istanbul, Akar said he was happy to see that James Jeffrey, the U.S. special representative for Syria engagement and the special envoy for the anti-Daesh coalition, and his accompanying delegation had moved closer to Turkey's views regarding the safe zone and other issues in Syria.

Turkey, having already cleared Daesh and the PKK-linked People's Protection Units (YPG) terrorist groups from border regions in Euphrates Shield and Olive Branch operations in northern Syria, aims to establish a 30-40 deep buffer zone in the area stretching from the Euphrates River to the Iraqi border after the planned U.S. pull out from the region.

"We do not accept and will not allow a terror threat against our country, people or borders in the east of Euphrates, Akar said.

"In that regard, our demand from the U.S., our friend, ally and strategic partner, that the YPG, which is no different than the PKK, is to be removed from the region, their weapons collected and transferred at least 30-40 kilometers to the south. We demand no PKK/YPG elements to be present in that 30-40 kilometers," he said, noting that the terrorists are conducting attacks by loading explosives on model planes.

"The U.S. has had a [negative] stance on this issue since the beginning. We see that there is some flexibility in that stance. Thus, we observe that they have moved closer to our views," Akar said, noting that he told Jeffrey and the U.S. delegation that while these talks are beneficial, they're also a serious loss of time and this provides terrorist opportunities risking the security of Turkey and its people; which should be dealt with as soon as possible.

Akar added that Turkey launched Operation Euphrates Shield on Aug. 2016 and cleared Daesh from the northern Syrian towns of Jarablus, al-Rai, Azaz, Dabiq and al-Bab by itself when talks with the U.S. for a joint operation proved unfruitful. At the time, Daesh terrorists were targeting Turkish settlements near the border and military outposts on a daily basis with harassment fire, and rocket and mortar attacks. "I once again expressed that we do not want to be in a situation like that ever again," Akar said.

Answering a question as to who will control the safe zone, Akar said that some U.S. officials came up with proposals that some anti-Daesh coalition, European or NATO forces could send troops but nobody had responded positively, adding that Turkey is the only county that could operate in the area.

Turkey not distancing itself from NATO with Russian S-400's

In separate remarks, Akar said Turkey was not distancing itself from the NATO alliance by buying the Russian S-400 missile defense systems, adding that Ankara should not be excluded from the F-35 jet project over its purchase.

Turkey and the United States, NATO allies, have been at odds over Ankara's move to buy the Russian S-400s, which Washington says are not compatible with NATO systems and may threaten the Lockheed Martin F-35 fighter jets, of which Turkey is a prospective buyer and partner in production.

Akar said that excluding Turkey from the F-35 project would put "very serious" burdens on other partners in the project.

"There is no clause saying 'you will be excluded if you buy S-400s' in this partnership. Excluding us just because one country wants so would not be in line with justice, laws or rights. This should not happen," Akar said.

He said Turkey was trying to explain to the United States and other partners in the F-35 project that the S-400s would not pose a threat to the jets, and added that Ankara had taken measures to prevent that.

In his strongest challenge yet to warnings that Turkey may be removed from the F-35 project, President Recep Tayyip Erdoğan said on Tuesday that the project would collapse if Turkey did not participate.

While Washington has warned of potential U.S. sanctions if Ankara pushed on with the S-400 agreement, Turkey has said it would not back down from the deal.

Instead, Turkey has proposed to form a working group with the United States to assess the impact of the S-400s, but says it has not yet received a response from U.S. officials.

The defense minister said that the NATO Secretary General was very positive and constructive in a phone call in which the issue was discussed, and it will be further talked through in detail during his visit to Turkey next week.

Turkey said two weeks ago it expected U.S. President Donald Trump to use a waiver to protect it against penalties over the S-400s, after U.S. Secretary of State Mike Pompeo said Ankara could face retribution for the deal under the U.S. Countering America's Adversaries Through Sanctions Act (CAATSA).

Akar also noted that preliminary talks were underway for the SAM-T surface-to-air missile defense system with EUROSAM and joint production could be launched in the future if an agreement is reached.