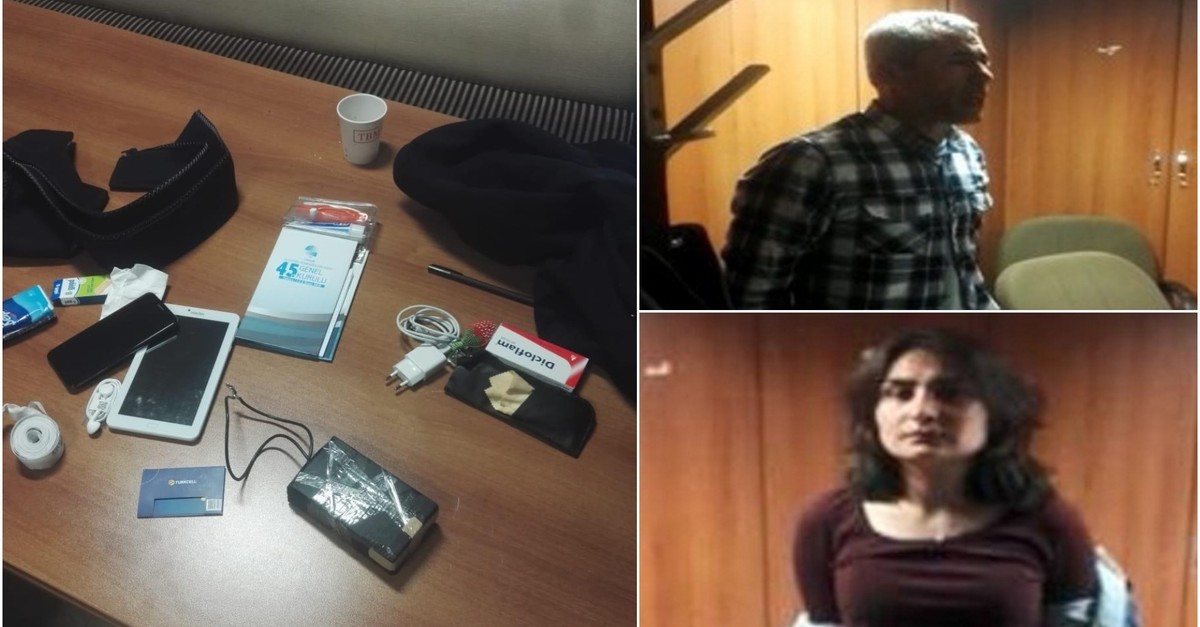 Two suspects with links to the extreme-left Revolutionary People's Liberation Party-Front (DHKP-C) have been arrested by security forces after they tried to enter the Turkish Parliament upon a deputy's invitation and take a member of staff hostage.

The duo, a woman and a man, came to the Parliament building at around 3 p.m. on Tuesday and said they were there to visit the Republican People's Party (CHP)'s Istanbul Deputy Mahmut Tanal, and were escorted to the visitors' waiting room. It was later reported that Tanal had given the suspects' names to the security personnel at the entrance as visitors.

During security checks, the two tried to take a member of staff hostage with a razor blade taped to a pencil, but were quickly neutralized by security guards. Police found a black box made to look like a bomb set-up and the bladed-weapon on the suspects after searching them.

"The terror attack on the TBMM directly targeted the Turkish people's will. All the affiliations, foreign or domestic, of this attack on the pace of the nation will be uncovered and the responsible will pay the price," Presidential Communications Director Fahrettin Altun said on Wednesday on his official Twitter account.

Congratulating the security forces who apprehended the suspects, Altun underlined that Turkey won't surrender to any terrorists.

One of the suspects identified as Mulla Zincir was found to have contacts with the DHKP-C, and implicated in five ongoing criminal cases on charges of "making propaganda for a terrorist organization", "organizing illegal meetings and protests," and defamation.

Meanwhile, the other suspect Eylem Yücel is currently implicated in 13 cases on crimes including "being a member of an armed terrorist organization", "making propaganda for a terrorist organization", "organizing illegal meetings and protests" and "damaging public property". Police also found that she. had served jail time in western Kocaeli's Kandıra Prison for "carrying out acts and activities on behalf of a terror group."

In his tweet, Altun also commemorated a Turkish prosecutor, Mehmet Selim Kiraz, who was killed by DHKP-C terrorists. Kiraz was a prosecutor who was investigating the possible negligence of police in the death of 15-year-old Berkin Elvan during Gezi Park riots. Kiraz was killed in his room at an Istanbul courthouse on March 31, 2015 after two militants took him hostage for several hours.

The group, which is listed as a terrorist organization by Turkey, the U.S. and the European Union, is responsible for a number of attacks in Turkey, including the assassination of business tycoon Özdemir Sabancı in 1996 and an attack on the U.S. Embassy in Ankara in 2013. The group has become less active in the country in recent years but remains a major security threat.

The DHKP-C, under the name Dev Sol until 1994, claimed responsibility for a series of high-profile murders, including the assassination of nationalist politician Gün Sazak and former Prime Minister Nihat Erim in 1980. The group also killed several Turkish intelligence officers. In 1994, it was founded as the DHKP-C after Dev Sol splintered. The group's terror activities remained relatively minor compared to the PKK, another terrorist organization targeting Turkey.

The DHKP-C attempted to stage a bloody comeback in recent years by carrying out attacks against the police. In 2012, about 10 years after its last known lethal attack in Turkey, the DHKP-C conducted a suicide bombing at a police station in Istanbul, killing a policeman. It claimed responsibility for a suicide bombing at the U.S. Embassy in Ankara, which killed a Turkish security guard in February 2013. This was followed a month later by rocket attacks against the Ministry of Justice in Ankara and the headquarters of the ruling Justice and Development Party (AK Party). In September 2013, the DHKP-C claimed responsibility for a rocket attack against the headquarters of Turkish police in the capital. No casualties were reported in the three attacks.