Turkey to continue to fight all terror groups with determination, MGK says 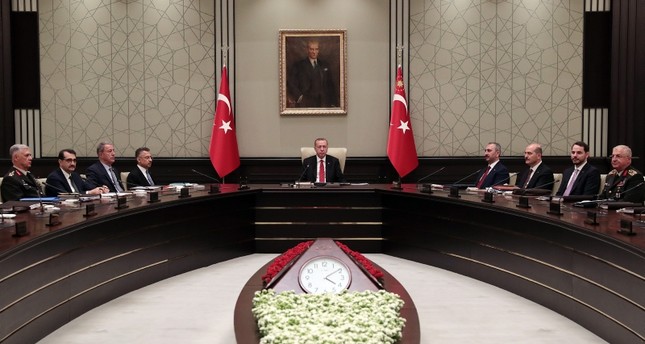 Referring to Turkey's counter-terror operation in northern Iraq, the MGK said Turkey will continue to fight PKK terrorists with determination.

Hakurk region is among the main bases of the PKK terrorists used to infiltrate Turkey or attack Turkish border outposts. The area is located some 30 to 40 kilometers south of Derecik district of southeastern Hakkari province bordering Iraq, and currently serves as the main grouping base for terrorists between their headquarters in Qandil Mountains near the border with Iran and Turkey.

Regarding Turkey's activities in the Eastern Mediterranean, the MGK noted that the country will continue to carry them out in line with international law.

"The Assad regime attacks on civilians in Syrian de-escalation zone damage peace process spirit," the statement said, adding that Turkey is keeping in touch with relevant countries to avoid a new humanitarian crisis and mass migration from those areas.

Share on Facebook Share on Twitter
Previous in War On Terror Four more PKK terrorists were neutralized in Turkey's Operation Claw... Next in War On Terror Turkey will continue to fight all terrorist groups with resolution...
DAILY SABAH RECOMMENDS