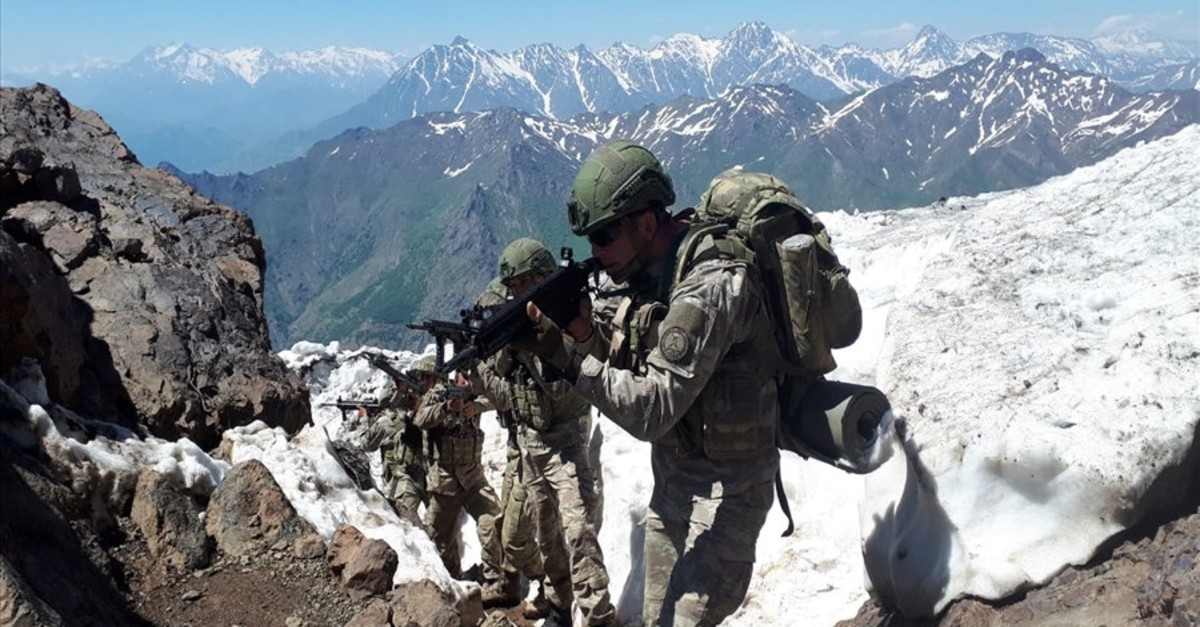 Beginning on May 27, Operation Claw has focused on completely eliminating terrorist threats in northern Iraq that emanate from the PKK presence.
by Eralp Yarar
Jun 13, 2019 12:28 am

Since the end of May, Turkish troops have been targeting PKK headquarters in northern Iraq, getting closer to the terrorists' nests day by day with an operation named Claw.

As new information leaks daily regarding the developments in the operation, the aim of the offensive becomes clearer: to completely eliminate the PKK presence and build permanent stability in the region to preserve Turkey's national security in accordance with international law. Targeting the Hakurk region of northern Iraq, Turkish security forces have crossed nearly 30 kilometers through southeast Turkey's Şemdinli district of Hakkari province with the aim of eradicating the PKK presence in the region due to concerns over national security, said Abdullah Ağar, a former military officer and security expert.

Speaking to Daily Sabah, Ağar said that by establishing military authority in the region, Turkey can block PKK members from infiltrating Turkey or attacking Turkish border outposts and added: "It may be the first time that the PKK would lose a region completely dominated by the terrorist group for years."

Veysel Kurt, an academic at Istanbul Medeniyet University, outlined three important features to stress the efficiency and importance of Operation Claw: geographical importance, the use of domestic military equipment without support from external forces and the discursive support of other actors in the region. Underlining the geostrategic importance of the Hakurk region, Kurt said Operation Claw is the latest episode in Turkey's war on terror launched in 2015.

"It will last until the terror nests are destroyed and peace can be extended to the Qandil mountains," said Kurt and added that the Iraqi government understands Turkey's sensitivity about the issue.

The Hakurk region is among the main locations PKK terrorists use to infiltrate Turkey or attack Turkish border outposts. The area is located some 30 to 40 kilometers south of the Derecik district of southeastern Hakkari province, bordering Iraq, and currently serves as the main base for terrorists between their headquarters in the Qandil mountains near the border with Iran and Turkey.

The Qandil mountains, located roughly 40 kilometers southeast of the Turkish border in Iraq's Irbil province, are being used as a headquarters by the PKK and its Iranian affiliate, the Kurdistan Free Life Party (PJAK), although the area is under de jure control of the Kurdistan Regional Government (KRG). The area has frequently been hit by the Turkish Armed Forces (TSK) in the last decade, yet a ground operation had not been launched in recent years. Qandil became the PKK's main headquarters in the 1990s after it used the Beqaa Valley in Lebanon as training grounds for many years.

Turkey had previously warned the KRG and Iraqi governments numerous times about eliminating the PKK's presence to maintain Turkey's border security. Despite top officials from both governments often expressing their discomfort with PKK camps and activities, saying that they won't allow militants to attack Turkey from their soil, no serious action was taken in this regard.

With no concrete results from Iraq and the KRG, Turkey decided to take things into its own hands and assumed a hard stance against the PKK presence in northern Iraq.

Analyzing the differences between operations Olive Branch and Euphrates Shield, Ağar said there are major differences in terms of military techniques and strategies. In Syria, security forces carried out an operation in the desert climate. On the other hand, the ongoing operation has been conducted in a rough and hilly geography with tough climate conditions. "It is a typical commando operation," he added.

Turkey carried out two cross-border operations west of the Euphrates, Operation Euphrates Shield launched in August 2016 and Operation Olive Branch in January 2018, to drive terrorist groups, including the YPG and Daesh, from its borders.

While the country liberated northwestern territories from Daesh, it also prevented the YPG from establishing a de facto autonomous region in Syria connecting the northwestern Afrin canton to the Kobani and Jazeera cantons in the northeast, which Ankara describes as a "terror corridor" posing a grave threat to its national security.

"The operation is also of great importance for geopolitical and regional strategies," said Ağar, underlining that not only Turkey and Iraq, but Syria and Iran are regional actors indirectly affected by the operation.

Commenting on the Iraqi governments' stance, Ağar said Turkey respects the sovereignty and territorial unity of Iraq and added that Iraqi officials had been informed in bilateral meetings about the operation during the planning process.

Beginning on May 27, Operation Claw has focused on completely eliminating terrorist threats in northern Iraq that emanate from the PKK presence. Security forces intensified Operation Claw with air support against militants and settlements of the terrorist organization in the region.

So far, 45 terrorists have been killed in the anti-PKK operation, and Turkish jets have pounded PKK weapons' positions, shelters and ammunition depots in the region.