US seeks support from European allies for YPG terrorists in Syria 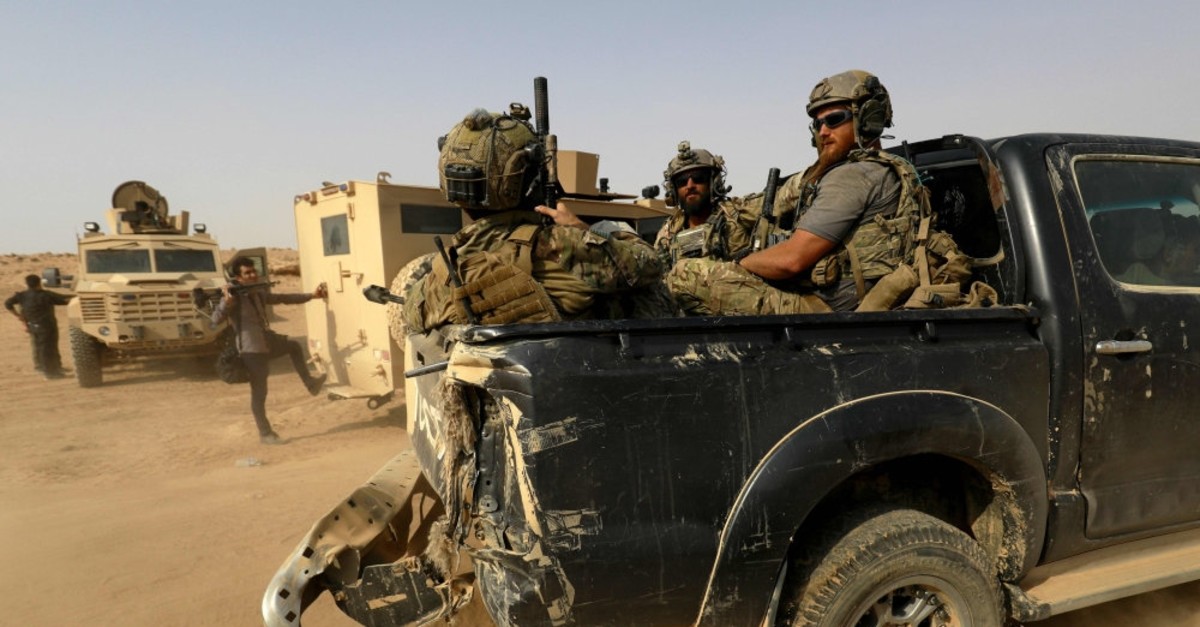 U.S.-backed military forces, including YPG terrorists, are pictured near the village of Susah in the eastern province of Deir el-Zour near the Syrian border with Iraq, Nov. 2, 2018.
by Daily Sabah with Agencies Jul 11, 2019 12:10 am

The U.K. and France have decided to deploy additional military forces in Syria in response to U.S. demands for increased military assistance to YPG terrorists

The U.S. continues its search to provide military support to the Syrian Democratic Forces (SDF), which is controlled by the PKK terrorist organization's Syrian affiliate, the People's Protection Units (YPG). With U.S. ground troops preparing to partially withdraw from Syria, Washington has been looking to provide the terrorist group the necessary equipment and backing it needs. The latest move on the matter was revealed yesterday, as the U.K. agreed to deploy additional military forces in Syria alongside France to allow the U.S. to withdraw its troops from the ongoing fight against the remnants of Daesh.

According to U.S. officials, the U.K. and France are expected to increase their special forces in the region by 10 to 15 percent, although the exact numbers remain secret.

As the journal Foreign Policy and The Guardian reported, this development was perceived as "a major victory… for Donald Trump's national security team" because few other countries had been willing to help out.

Yet, the U.K. and France's support seem to not be enough for the U.S. to secure the YPG's condition since another report by the Danish daily Politiken said that the U.S. also demanded Denmark send ground troops to Syria and provide military training to YPG terrorists.

Danish officials have not yet responded to U.S. demands for military assistance to the YPG terrorists.

On Sunday, U.S. Special Representative on Syria James Jeffrey told German media, including the Die Welt newspaper, that Washington wants Berlin to put boots on the ground in northern Syria. Jeffrey, who was visiting Berlin for Syria talks, added that he expects an answer this month.

However, Berlin on Monday refused Washington's request to increase its military involvement in Syria.

The U.S. Syria policy, especially its military support for YPG terrorists, has been a cause of tension between Ankara and Washington. Ankara argues that one terrorist group cannot be used to fight another. Turkey sees the YPG as an extension of the PKK, which has claimed the lives of more than 40,000 people in its 30-year terror campaign against Turkey.

The U.S., however, while listing the PKK as a terrorist group, maintains steadfast military support for the terrorist organization, by providing truckloads of military supplies and military training under the pretext of fighting Daesh at the expense of losing its NATO ally.

In December, U.S. President Donald Trump announced that Washington would pull its troops out of Syria, saying that Daesh has been defeated. The withdrawal decision was quickly interpreted as an intention to halt U.S. support for the YPG. Yet, a growing number of inconsistent statements from the White House indicate that cooperation still remains an issue of concern.

Ankara has been pointing out that it will not allow the YPG to strengthen its grip in Syria. Turkey is also prepared to launch an operation east of the Euphrates to eliminate the YPG. However, following the U.S. decision to withdraw from Syria, Ankara decided to put the operation on hold for some time. While establishing a safe zone would eliminate some of Turkey's concerns, the presence of the YPG in Syria and its plan to form a quasi-state will continue to present a threat to the country.

President Recep Tayyip Erdoğan highlighted on Tuesday that Turkey's anti-terrorism efforts in northern Syria and strategy to create a convenient area in the region to make refugees return possible to their home.

"We should transform the terror corridor into a peace corridor," Erdoğan said, referring to the area under the grip of the YPG in northern Syria.

The president stressed that he discussed the issue with U.S. President Trump and Russian President Vladimir Putin in the recent G20 meeting in Tokyo, noting Turkey's expectation for a concrete support for the safe zone plan.

"We may construct houses in this area to transfer refugees living in container camps. There could also be some steps for agriculture and stock raising. We want to take quick action but we see nothing more than a goodwill," he said.

Until now, Turkey and the U.S. did not discuss in detail where the safe zone would be and what would happen to the YPG terrorists. Turkish officials had been waiting for Washington to clarify what they meant by the 20-mile-deep safe zone. As Turkey was waiting for the U.S. to take more concrete steps, Turkey carried out two cross-border operations west of the Euphrates River, Operation Euphrates Shield launched in August 2016 and Operation Olive Branch in January 2018, to drive terrorist groups, including the YPG and Daesh, from its borders.

In March, SDF forces including YPG terrorists captured the last bastion of Daesh in Syria, though Daesh has remained active underground. Trump backtracked on his decision to pull all 2,000 U.S. soldiers out of northeastern Syria and said that some 400 will stay to help stabilize the region, which straddles the border between Iraq and Syria.

The U.S. has since been working to secure more support from the 80 allies in the anti-Daesh coalition as U.S. forces begin to draw down. The U.S. is hoping Europe will help, pressuring Britain, France and Germany, which has so far deployed surveillance aircraft and other noncombat military support in Syria.