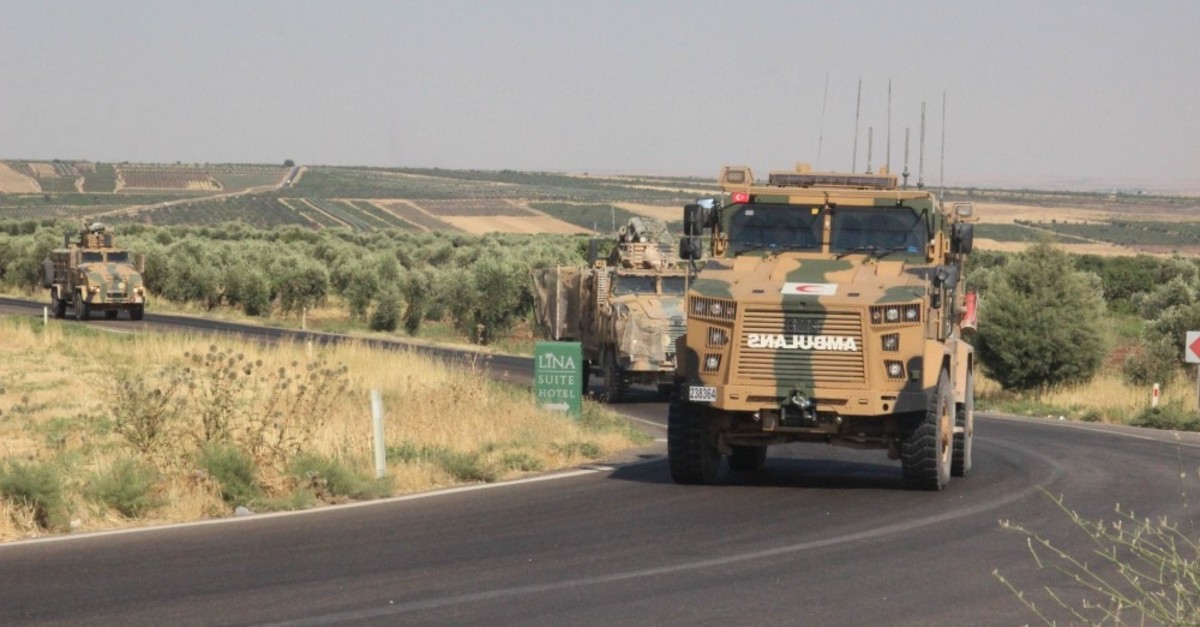 Turkey has delivered a large amount of military support near the Syrian border, including heavy weapons, armored vehicles and tanks, July 10, 2019.
by Daily Sabah Jul 12, 2019 12:08 am

Ankara has increased its military deployment near the Syrian border, including heavy weapons, armored vehicles and tanks. Reports suggest that more than 50 tanks and artillery batteries were deployed over the last two days near Tal Abyad, located next to Turkey's border district of Akçakale and an area controlled by the People's Protection Units (YPG), the Syrian affiliate of the PKK terrorist organization. While Ankara's frustration due to Washington's indifference on removing YPG terrorists has been known for a long time, the meetings organized by some Gulf countries to support the terrorist organization could be the tipping point for Ankara to launch an extensive military offensive, reports and experts have indicated.

"The latest deployments and tactical mobility on the ground have very strong indications for an offensive east of the Euphrates," Abdullah Ağar, a former military officer and security expert, said Thursday.

Along with a large military deployment, there has been extraordinary activity on the Syrian side of the border. While all Free Syrian Army (FSA) divisions in northern Syria's al-Bab and Jarablus are on full alert, FSA commanders were summoned to Ankara to make evaluations and discuss details of the offensive, according to reports. Meetings were carried out with tribe leaders and nongovernmental organization representatives from the region.

In his column yesterday, Yeni Şafak daily's Editor-in-Chief İbrahim Karagül highlighted the increasing presence of Saudi Arabia and the United Arab Emirates (UAE) in YPG-held areas with U.S. coordination and the plans of some European countries to deploy more soldiers in northern Syria.

"The east of the Euphrates is a matter of existence for Turkey. If Ankara could have intervened in the region to date, it wouldn't be surrounded in the Eastern Mediterranean," Karagül said, referring to the attempts by some countries, notably Greece, the Greek Cypriot administration of Southern Cyprus and Egypt, to diminish Turkey's activity in the Eastern Mediterranean.

Turkey has long been stalling a possible operation east of the Euphrates to end the presence of YPG terrorists, which Ankara says pose a grave security threat due to their affiliation with the PKK terrorist organization that is responsible for the deaths of 40,000 in its nearly 40 years of terror against the state. Last December, President Recep Tayyip Erdoğan said Ankara temporarily halted operations to wait a little longer until U.S. troops had completely withdrawn from the region, as announced by U.S. President Donald Trump. However, after eight months, Washington has not taken any steps in this regard. Also, the two NATO allies reached the Manbij deal last June to accelerate the withdrawal of the YPG from Manbij and prevent the terrorist organization from disrupting peace efforts. The agreement became yet another promise that the U.S. has been dragging its feet on to implement.

Also, some Gulf countries, particularly, Saudi Arabia and the UAE, conducted meetings with high-level YPG commanders in recent months. In May, Anadolu Agency (AA) reported that Saudi military consultants held a meeting with YPG commanders in the Ayn al-Arab district, also known as Kobani, and promised to deliver monetary support.

During the fight against Daesh, the U.S. opted to partner with the YPG, despite its NATO ally's security concerns, and provided truckloads of weapons to the terrorist group. Some 22,000 truckloads of arms and ammunition have been given to the YPG, so far. Some of the arms include cruise missiles, anti-tank guided missiles (ATGM) and shoulder-launched surface-to-air missiles (MANPADS).

The delivery of arms and equipment to the YPG, which is still poisoning bilateral relations between Turkey and U.S., began in 2014 and intensified in subsequent years. The presence of these weapons has been a cause of concern for Ankara, threatening the stability of northern Syrian areas that were liberated from Daesh during Operation Euphrates Shield and Operation Olive Branch. There are also other serious possible threats to Turkey, including the possibility of the transfer of these U.S.-made weapons to southeast Turkey through the border controlled by the YPG to be used against the Turkish army by PKK terrorists.