Allies disappoint Turkey on FETÖ extraditions, use fugitives as leverage 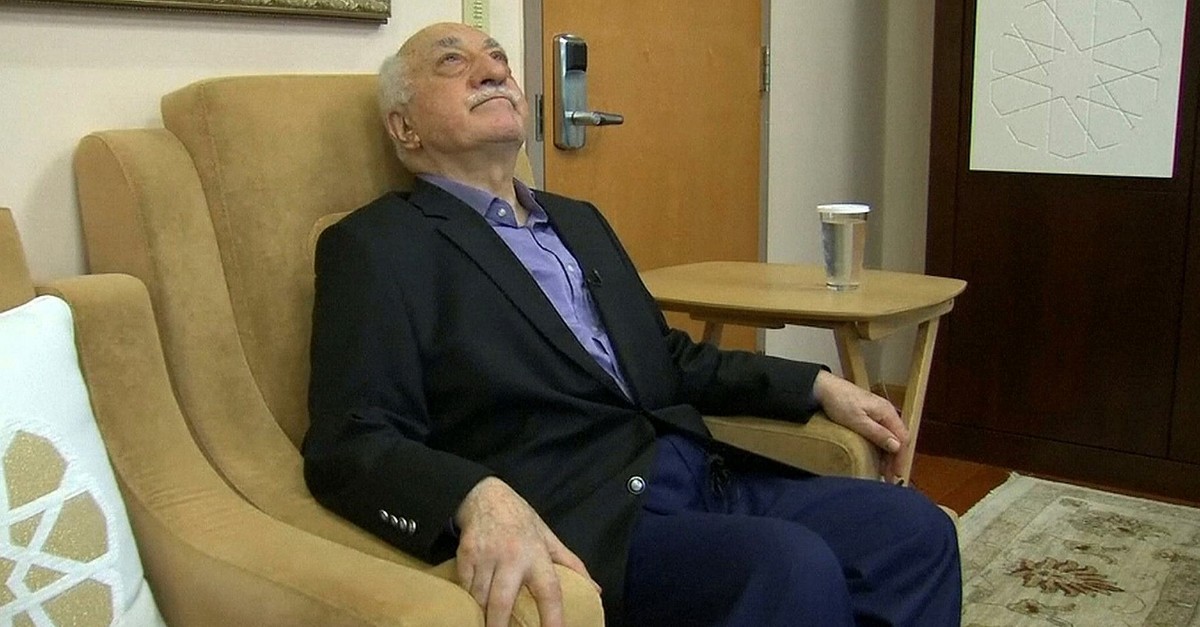 The U.S. insists on hosting FETu00d6 leader Fetullah Gu00fclen who has been living in Pennsylvania since 1999, despite repeated demands of extradition from Turkey.
by Eralp Yarar Jul 15, 2019 12:07 am

Refusing to assist Turkey in its fight against FETÖ by not extraditing the fugitives within their borders, Western countries are going against the requirements of their alliances with Turkey, failing the country in every way possible

Despite Turkey reiterating its demands for the extradition of Gülenist Terror Group (FETÖ) members for three years, many Western states, especially the United States, have been reluctant to extradite them because of their hidden political agendas and dark relations, analysts say.

Today marks the 3rd anniversary of the defeated coup attempt, which left 251 people dead and nearly 2,200 injured. FETÖ and its U.S.-based head Fetullah Gülen orchestrated the defeated coup of July 15, 2016 in Turkey. FETÖ was also behind a long-running campaign to overthrow the state through the infiltration of Turkish institutions, particularly the military, police and the judiciary.

An unknown number of Gülenists, mostly high-ranking figures, fled Turkey when the coup attempt was thwarted. A large number of Gülenists had already left the country prior to the coup attempt after Turkish prosecutors launched investigations into other crimes of the terrorist group. Despite Turkey's extradition requests and bilateral legal agreements, many FETÖ members still enjoy their lives in different countries around the world.

Speaking to Daily Sabah on the legal process of FETÖ members' extradition process, Ali Çınar, the president of the U.S.-based Turkish Heritage Organization, said that there is still no serious progress on this issue.

"However, we see an ongoing dialogue between Turkish and American officials. An official team of U.S. officials went to Ankara earlier this year for follow up meetings on the extradition of the FETÖ leader," said Çınar, adding that Turkey did not give up on its request and expects the United States to fulfill the requirements of being a state led by the rule of law and extradite the FETÖ leader.

'U.S. OFFICIALS WORRIED THEIR DARK SECRETS MAY BE UNCOVERED'

On the issue of legal process about extraditing Gülen and other FETÖ members, Hüsamettin İnaç, the chairman of the Dumlupınar University's Department of Political Science and International Relations, presents another perspective, suggesting that U.S. officials are worried that their dark secrets may be uncovered in case of extradition.

İnaç said: "They are worried that FETÖ-CIA relations will be uncovered. Also, some senators and political agents are involved in these dark relations. If they extradite FETÖ members and its head to Turkey, these dark secrets can be revealed."

In the aftermath of the July 15, 2016 coup attempt, Turkey has sped up extradition processes for members of FETÖ abroad.

Gülen, who arrived in the United States in 1999, currently lives in a luxurious retreat in Saylorsburg, Pennsylvania, in self-imposed exile. He never leaves the well-guarded compound but often gives interviews to foreign media. Ankara formally requested Gülen's extradition on July 19, 2016, and has been pressing the U.S. ever since, sending hundreds of folders full of evidence implicating Gülen and FETÖ in the coup attempt. The issue has been raised in bilateral meetings between Turkish and American officials in phone calls, letters and other exchanges.

Turkey also sought a preventive arrest to keep Gülen in the U.S. after reports emerged that the terrorist leader was planning to flee to another country. While Ankara says evidence shows that Gülen's network formed a quasi-state within the Turkish government and attempted to topple it with the ultimate intent of taking over the state through a coup, the U.S. has been reluctant to extradite him, claiming that there is insufficient evidence to associate him with the July 15, 2016 coup attempt. The issue has created a deep rift in relations between the two countries. Despite Ankara's determined efforts, the administration of former U.S. President Barack Obama took no action against the U.S.-based terrorist leader. Under normal circumstances, Gülen should have already been arrested since Turkish authorities issued an official request for his extradition under the 1979 treaty between the U.S. and Turkey. Former Justice Minister Bekir Bozdağ went to the U.S. several times to expedite the legal process and met with U.S. authorities, including former U.S. Attorney General Jeff Sessions; however, no formal steps have been taken on the issue so far.

Underlining that the United States has extradition treaties with 100 countries, Çınar said: "But even with treaties in place, extraditions are often controversial and sometimes cause a difficult situation in geopolitical friction, as with a case involving the FETÖ leader,"

Noting that the United States and Turkey signed the Treaty on Extradition and Mutual Assistance in Criminal Matters in 1979 and ratified it in 1980, Çınar said: "As we all know, Turkey has shared much evidence of FETÖ, which is behind the July 15th coup attempt. When an extradition request is received, it is first assessed by U.S. government attorneys to determine if it fulfills the requirements of the U.S.-Turkish extradition treaty. If accepted, it will launch a process that includes the objective evaluation of the request to determine whether all of the legal requirements of the treaty are met. The United States decides all extradition requests on an individual and processes all requests with the same procedure ,subject only to variations in the relevant bilateral treaty."

U.S. officials are still reviewing the evidence to see if it is sufficient for the extradition request under the treaty and U.S. law, said Çınar and added: "It seems like it takes time to review and finalize the case, and U.S. official lawyers might need more documentation before legal requirements are satisfied. My understanding is Turkey submitted additional evidence on the FETÖ case last month during a visit byTurkish officials." He also noted that President Recep Tayyip Erdoğan, Foreign Minister Mevlüt Çavuşoğlu and other Turkish officials bring this case up every time when they meet their counterparts.

The perspective of state officials and society in the U.S. is another important topic about FETÖ extraditions. Çınar said that there is still a problem in the American public believing FETÖ was behind a long-running campaign to overthrow the state through the infiltration of Turkish institutions, particularly the military, police, and judiciary.

MOST U.S. OFFICIALS PREFER TO BE QUIET ON EXTRADITION

When we look at the U.S. officials' perception of the issue, Çınar said: "I believe that many U.S. officials understand the importance of this case for Turkey; however, the American public and some politicians prefer to be quiet on this issue."

The tension in Turkey-U.S. relations in recent years has also impacted other issues, including the FETÖ case, said Çınar and added: "Since there is a new US. ambassador in Turkey, this is a good sign to mitigate the situation in the two countries. I believe that supporting constructive dialogue on the U.S.-Turkey partnership is especially important during times like these, when the relationship is experiencing not just tension but also negative perceptions in both Washington and Ankara."

İnaç, on the other hand, said that the issue of FETÖ has been used as leverage against Turkey to punish the country's independent stance from the NATO-U.S. axis in foreign relations. They also use FETÖ and its agents against Turkey in international platforms to discipline the country.

Thus, they describe July 15 as a plot to dissolve opposition figures and the announcement of emergency rule as a coup against democracy, noted İnaç, added that Turkey should explain itself better by using public diplomacy more efficiently.

Looking at the latest situation of FETÖ activity in the U.S., it is still very active in many different fields in many states with their hidden agenda. FETÖ operates over 173 charter schools that enroll over 85,000 students in 26 states.

"We see that a couple of new schools are opened each year despite official local investigations. They have the second largest charter school operation in the nation with U.S. taxpayers' money. These schools received more than an estimated $800,000,000 in taxpayer funds," Çınar said.

Texas has the most FETÖ affiliated charter schools with 63. They are also very active in the academic world, media and politics. Many of FETÖ members work behind the scene and partner with anti-Turkish groups that try to hurt the relationship between the two NATO Allies, he added.

Media reports said the country has so far identified some 4,600 suspected members of the group around the world. Turkish courts also sporadically issue arrest warrants for FETÖ members abroad. Ankara has long complained of reluctance by European countries and the U.S. to cooperate in the fight against FETÖ. The FETÖ suspects mostly live in the U.S., Germany and Canada. A majority of Turkey's allies in Africa and Asia have shut down FETÖ-linked schools and have already extradited wanted suspects. İnaç said that we could talk about the existence of a "FETÖ diaspora" that operates under the protection of countries, especially the U.S., where they live. He also noted that FETÖ is also very active in Balkans."Using their vast network spread ing through different countries, they have led a perception operation against Turkey," added İnaç.

FETÖ has some 312 educational facilities in the U.S. and receives almost $600 million per year for these schools, said İnaç, adding U.S. officials continue to accept FETÖ's applications for new schools.

"In addition to educational activities, FETÖ diaspora operates through a vast network of civil society, think-tanks, CIA agents and some politicians who are funded by the organization. In response, Turkey uses its very own network to influence students abroad, some civil society organizations, media, diplomats and state-led foundations like the Maarif Foundation," he added.