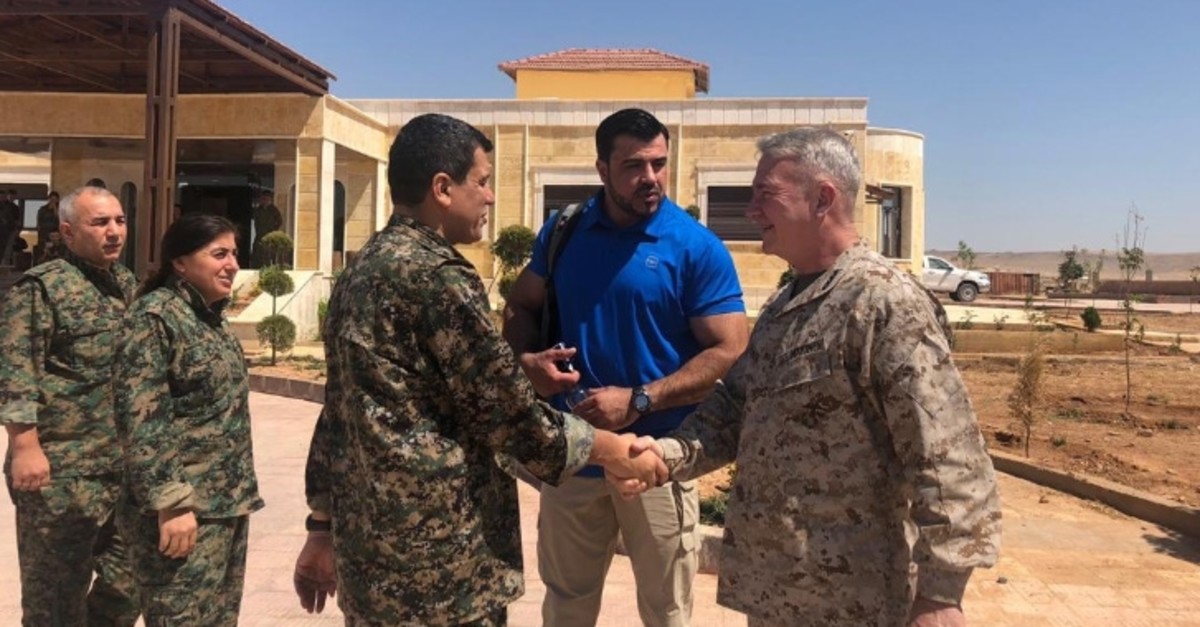 U.S. Central Command's Gen. Kenneth McKenzie met with the top commander of the People's Protection Units (YPG), the Syrian affiliate of the PKK, which is recognized as a terrorist organization by Turkey, the EU and the U.S.

Mustafa Bali, the spokesperson for the Syrian Democratic Forces (SDF), which is dominated by the YPG, announced on his Twitter account yesterday that McKenzie visited the northern Syrian territories that are under the control of the terrorist organization. A representative of the U.S.-led coalition, William Roebuck, accompanied McKenzie during his visit. In the photos, the U.S. officials can be seen with YPG commander Mazloum Abdi — also known as Ferhat Abdi Şahin or Şahin Cilo, who is on Turkey's most-wanted list.

The statement itself contradicted the official U.S. and YPG position for over a year that Daesh has been defeated completely, prompting speculation about the real content and intent of the meetings.

YPG, the Syrian branch of PKK terror group that has been designated terrorist by the U.S. and EU for decades, has arbitrarily killed civilians and raped women during the ongoing civil war in Syria and recruited child soldiers in its so-called fight against Daesh, according to U.N. reports.

Meanwhile, U.S. special envoy on Syria James Jeffrey arrived in Ankara on Monday for a two-day visit to discuss counterterrorism and security.

"Ambassador Jeffrey is leading an interagency delegation to continue discussions with senior Turkish officials to advance issues of mutual interest on Syria to include, addressing Turkey's legitimate security concerns, the implementation of UNSCR 2254 on the resolution of the Syrian conflict, and our continued efforts to ensure an enduring defeat of ISIS," read Sunday's statement of the U.S. Department of State.

"Turkey's concerns regarding the meeting between high-ranking US officials and YPG terrorists have been conveyed to Amb. Jeffrey by Minister Akar, National Defense Ministry said later on the same day in a statement.

The activities of the YPG terrorist group have been a major security concern for Ankara, while the U.S. views the group as a "reliable partner" in the fight against Daesh. Şahin, a PKK terrorist on Turkey's most-wanted list, has been an integral part of this partnership, leading initial negotiations with the U.S. beginning in August 2014.

During the fight against Daesh, the U.S. opted to partner with the YPG, despite its NATO ally's security concerns, they also provided truckloads of weapons to the terrorist group. Some 22,000 truckloads of arms and ammunition have been given to the YPG, so far. Some of the arms include cruise missiles, anti-tank guided missiles (ATGM) and shoulder-launched surface-to-air missiles (MANPADS).

The delivery of arms and equipment to the YPG, which is still poisoning bilateral relations between Turkey and U.S., began in 2014 and intensified in the subsequent years. The presence of these weapons has been a cause of concern for Ankara, threatening the stability of northern Syrian areas that were liberated from Daesh during Operation Euphrates Shield and Operation Olive Branch. There are also other serious possible threats to Turkey, including the possibility of the transfer of these U.S.-made weapons to southeast Turkey through the border controlled by the YPG to be used against the Turkish army by PKK terrorists.