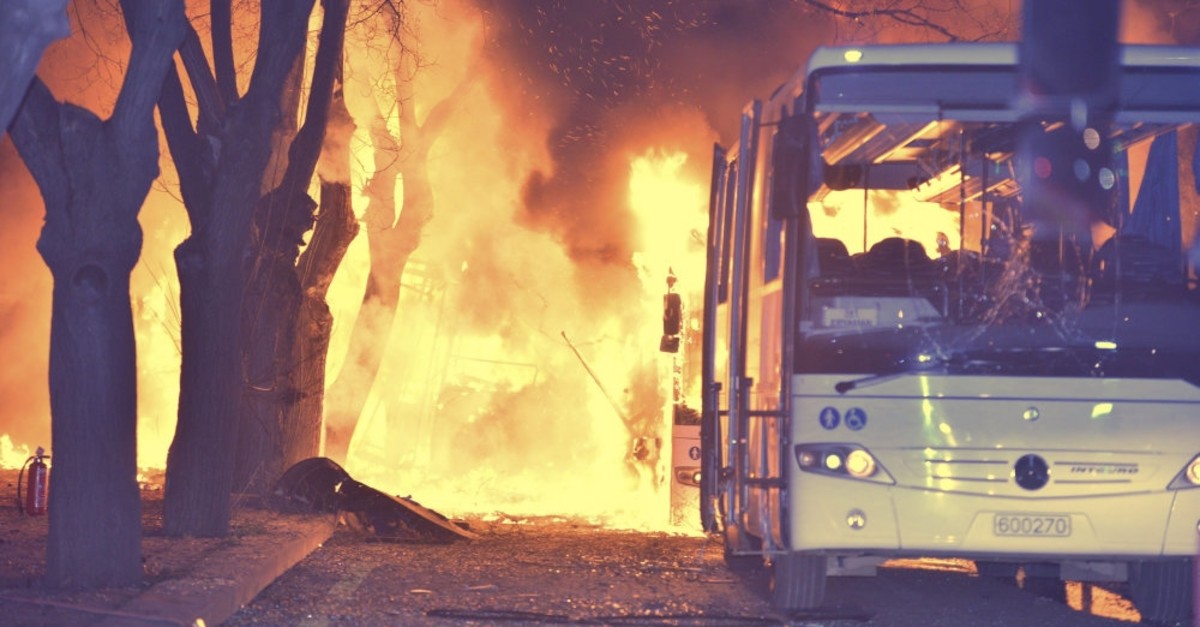 Twenty-seven people were killed in a 2016 PKK terrorist attack in Ankara, which Salih Muslum was responsible for.
by daily sabah Jul 24, 2019 12:12 am

Interpol removed the red notice from Salih Muslum, a senior PKK figure who has been responsible for various civilian killings. The move received backlash from Ankara, which objected immediately

Interpol revoked red notices for 144 criminals, including senior PKK terrorists responsible for a suicide attack in the capital Ankara that killed 36 people back in 2016, a move that drew heavy criticism from Turkey. Turkey issued arrest warrants for the 144 people. The warrants included one for the former head of the Democratic Union Party (PYD), Salih Muslum, a group that is a Syrian affiliate of the PKK terrorist organization, for his involvement in the suicide bombing in the heart of the Turkish capital.

In 2016, a bombing in one of the major hubs of the capital took place, taking 36 lives and leaving many wounded. The Kurdistan Freedom Falcons (TAK), another offshoot of the PKK terrorist group, claimed responsibility for the attack. "We claim the suicide attack that was carried out on the evening of March 13 in the streets of the capital of the fascist Turkish republic," was the statement.

The 156 suspects, including PKK leaders such as Murat Karayılan, Cemil Bayık, Duran Kalkan, Mustafa Karasu along with Muslum, were prosecuted for offenses such as "disrupting the unity and territorial integrity of the state," "intending to kill 349 people," "transporting hazardous substances" and "damaging public property." The Interior Ministry had also offered a bounty of nearly TL 4 million for Muslum. However, during the prosecution process, the files of 144 suspects were separated and sent to Interpol to be issued red notices. Despite Interpol initially issuing the notices, it later revoked them. It also refused Turkey's applications for 352 people during this period.

"Interpol's general secretariat has been informed about objections regarding annulment of red notices for 144 criminals and the refusal of red notices for 352 people for various reasons," a justice minister statement said on the issue.

The main suspect, Muslum, was the co-head of the PYD terrorist group. He joined the PYD in 2003 and served as its co-chair between 2010 and 2017. Muslim regularly travels around the EU and has been based in Europe for much of the Syrian civil war. While the EU considers the PKK a terrorist organization, it does not recognize the PYD as such. Since stepping down as the head of the PYD in 2017, Muslim has been a foreign representative of the Movement for a Democratic Society (TEV-DEM) set up in Syria during the civil war. The TEV-DEM and the PYD seek "democratic autonomy" in post-civil war Syria.

The PYD was founded in 2003 at a time when PKK activity in Turkey was reduced to a minimum with its leader Abdullah Öcalan captured. The PYD was ineffective in Syria due to tight regime control, but when the civil war broke out in 2011, it became a major player in the country's predominantly Kurdish northeast. As a reconciliation process with the PKK was ongoing between 2012 and 2015, Ankara tried to persuade the PYD to drop its hostile attitude toward Turkey, open cooperation channels and to end its affiliations with the Bashar Assad regime. As the PKK unilaterally resumed armed attacks in July 2015, the PYD and its armed wing, the People's Protection Units (YPG), provided the PKK with militants, explosives, arms and ammunition. Simultaneous armed revolts broke out in almost all towns and cities bordering Syria; whereas terrorists trained in northern Syria staged suicide attacks in Turkish cities.

In February 2018, Muslum was detained in the Czech Republic's capital Prague upon Turkey's request and detention order. Despite Ankara's extradition request, a Czech court ruled for the release of the former PYD leader, a decision that drew the ire of Turkish ministers, who said it was not in line with international law and a move supporting terrorism.