Turkey-US roll up sleeves for safe zone in Syria, what about YPG terrorists? 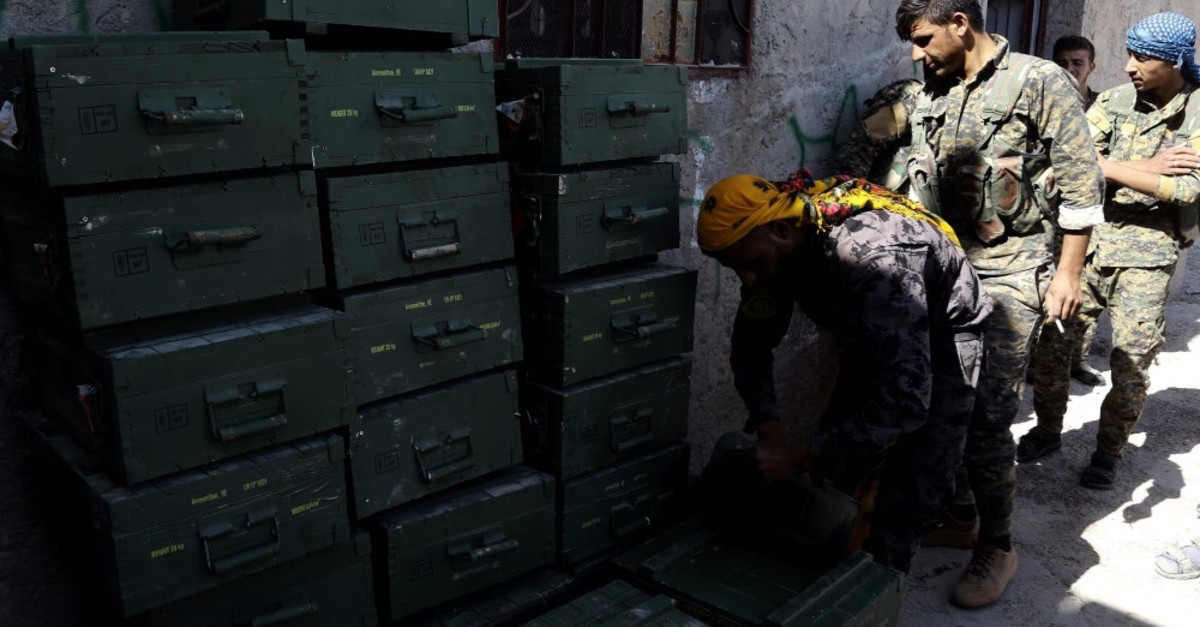 A safe zone is on the way for northern Syria as Turkish and U.S. delegations have been conducting talks for the past few days. However, the presence of YPG terrorists in this instance still remain ambiguous

U.S. Special Envoy for Syria James Jeffrey's visit to Turkey that started on Monday and continued until yesterday has been considered quite productive since the two countries' delegations finally gave the green light to the long-awaited establishment of a safe zone in northern Syria. Although the news was welcomed, as the idea is seen as one way to bring peace to the region, many ambiguities emerged since the question of how to achieve this is still waiting to be answered. One of the biggest obstacles, however, is the presence of the PKK's Syrian affiliate, the People's Protection Units (YPG), which is being supported by the U.S.

Turkish military officials and their U.S. counterparts launched joint works to establish a safe zone in northern Syria, the Defense Ministry announced Tuesday. In a Twitter post, the ministry said military officials of both countries discussed the creation of a safe zone, to be established jointly by Turkey and the U.S. in a coordinated manner. Turkish and American military officials will continue to discuss the matter in the coming days, according to the statement. "As the negotiations are still ongoing, it is not clear yet where these YPG militia members will go in the case of establishing the safe zone," said Ali Bakeer, a political analyst, when he was asked what would happen to the terrorist organization. Since many of the terrorists are not originally from the area, Bakeer said that because of this, some of them might go back to Iraq, to bases in the Qandil mountains.

"Yet," he added, "if the U.S. is going to continue to shield them, they might just withdraw back deep inside Syrian territory beyond the borders of the intended safe zone." Still, according to Bakeer, the best solution is to dissolve the terrorist organization and withdraw their weapons. While establishing a safe zone would eliminate some of Turkey's concerns, the presence of the YPG in Syria and its plan to form a quasi-state will continue to present a threat to the country. Until now, Turkey and the U.S. had not discussed in detail where the safe zone would be and what would happen to the YPG militants.

Turkish officials had been waiting for Washington to clarify what they meant by the 20-mile-deep safe zone. Since 2012, President Recep Tayyip Erdoğan has been suggesting that a safe zone of 30-40 kilometers could be established between the northern Syrian towns of Jarablus and al-Rai. However, the plan has not come to fruition. On Tuesday, Defense Minister Hulusi Akar and Jeffrey met in Ankara and exchanged views on the issue, and for the first time, they indicated that a joint working group would be established for a safe zone project.

"Establishing a safe zone will enable hundreds of thousands of Syrians to go back to their lands and hometowns," said Bakeer. However, according to Bakeer, a safe zone will also test the seriousness of the international community, which has been failing Syrian people for eight years, on finding peace in the region. "The U.S. wants multinational forces, out of the framework of the international community, to be stationed in northern Syria.

This doesn't sound to be an effort to protect the intended safe zone or Syrian people rather than to shield the YPG," he said, expressing his concerns. "If this point is resolved as well," he indicated, "it would clear the way for a better understanding between Turkey and the U.S. on the purpose of the safe zone, why it is essential, the way it should be protected and who it would protect in Syria."

The YPG has organic organizational and operational links with the PKK, a group considered a terrorist organization by the U.S., the EU and Turkey. The U.S. has provided military training and given truckloads of military support to the YPG, despite its NATO ally's security concerns.

Turkey and the U.S. agreed on a road map in June 2018, foreseeing the withdrawal of the YPG from Manbij and installing joint Turkish-American patrols, which began in November. However, the process has been sluggish as the terrorist group is still present in the city despite the three-month timetable set for implementing the deal.

Turkey has repeatedly indicated its readiness to launch an operation east of the Euphrates to eliminate the YPG. However, following the U.S. decision to withdraw from Syria in December, Ankara decided to put the operation on hold for some time.

As Ankara was waiting for Washington to take more concrete steps, Turkey carried out two cross-border operations west of the Euphrates River, Operation Euphrates Shield launched in August 2016 and Operation Olive Branch in January 2018, to drive terrorist groups, including the YPG and Daesh, from its borders.

In this respect, Foreign Minister Mevlüt Çavuşoğlu said before the meeting with Jeffrey on Tuesday, "If the planned safe zone is not established and threats to Turkey continue, an operation will be launched east of the Euphrates River to oust the YPG from the region."

"Indeed, the U.S. has been providing the Syrian branch of the PKK for a long time, enabling the terrorist group to commit more crimes against Syrian citizens in northern Syria whether they are Arabs, Turks, or even Kurds, to control more land and to constitute a threat to Turkey and to Syria's unity," Bakeer said. He also underlined that despite promises of withdrawing American weapons from the terrorist organization, the country has failed to do so, so far. "In fact they have sent more support in the last couple of years along with the efforts to rebrand the YPG," he said.

However, recent developments signal that the U.S. is still failing Turkey on this issue, as Çavuşoğlu said yesterday that recent proposals by U.S. officials on the establishment of a safe zone in Syria fall short of what is needed.

"New U.S. proposals on a Syria safe zone are not at all satisfactory for Turkey," Çavuşoğlu said at a press conference after meeting with Denis Moncada Colindres, his Nicaraguan counterpart.

Çavuşoğlu went on to say that Ankara and Washington need to hammer out an agreement as soon as possible, as Turkey has "run out of patience." Still, according to Bakeer, withdrawing U.S. weapons from the YPG should be a priority, and it will test Washington's coming intentions for working with Turkey in Syria.