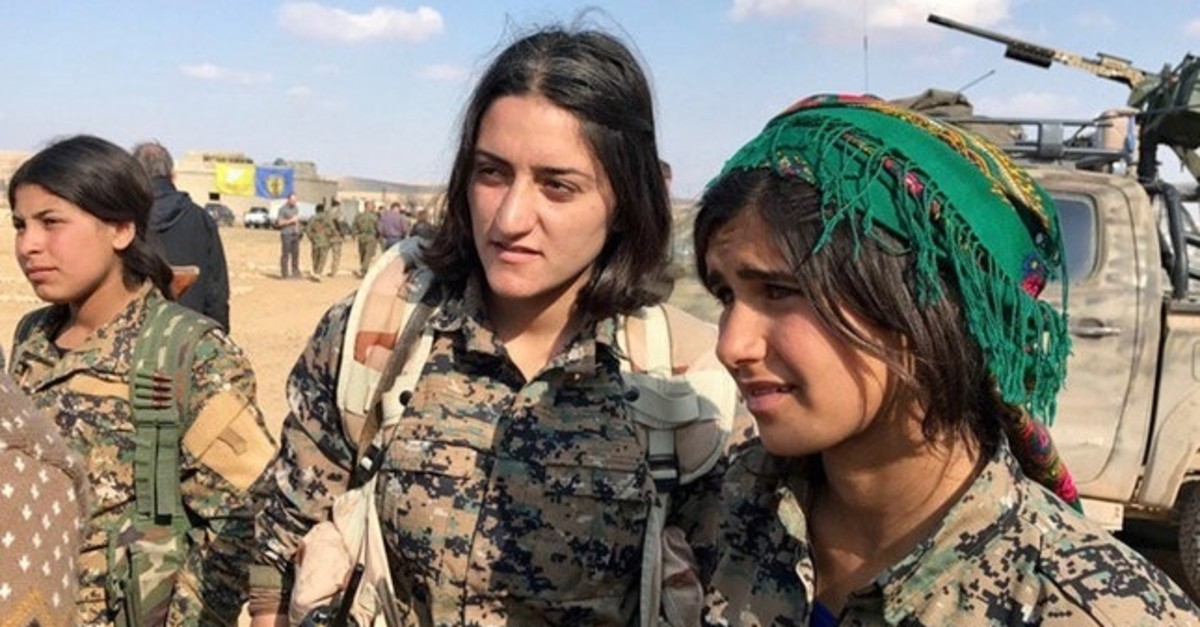 The PKK and the YPG have a history of exploiting children and forced recruitment. Under international law, the recruitment or use of children under 15 is designated a war crime.
by Daily Sabah Jul 29, 2019 12:11 am

A U.N. report has revealed that the PKK terror group’s Syrian affiliate, the People’s Protection Units (YPG), has recruited some 313 children and used schools as training grounds and ammunition depots in the region. While almost 40% of the recruited children were girls, 20% of them were under 15 years old, the report said

U.N. Secretary-General Antonio Guterres presented a report to the U.N. Security Council on Friday, which revealed that the PKK terrorist organization's Syrian affiliate, the People's Protection Units (YPG), has recruited 313 children and is using schools for military purposes. Although the statistics provided in the annual "Children in Armed Conflict" report expose the scale of the rights violations perpetrated by the YPG terrorist organization, the international community has remained sedentary on the issue.

Even the U.N., the organization that revealed these numbers, has preferred to sit at the table with YPG terrorists instead of taking concrete actions against their violations. According to the report produced at the request of the U.N. Security Council, nearly 40% of children recruited by the terrorist group were girls younger than 15 years old. The report found that these children had received military training and that 119 underage girls have fought in battles. The U.N. report also unveiled that the YPG terrorist group used 24 schools and hospitals as training grounds and 14 schools as ammunition depots. Despite the report, which proves the human rights violations, especially against children, it is surprising to see that the international community, instead of taking a stance against the YPG, has chosen to handle the issue through ineffective or weak measures.

Meanwhile, the U.S. has even gone as far as supporting the terrorists with military provisions.

At the beginning of the month, Virginia Gamba, the U.N. secretary-general's special representative on children in armed conflicts, met with a YPG terrorist commander, Mazloum Abdi, also known as Ferhat Abdi Şahin or Şahin Cilo, who is on Turkey's most-wanted list, and signed an agreement in Geneva. The so-called agreement aims to end the use and recruitment by the Syrian Democratic Forces (SDF), an umbrella group dominated by the YPG, of individuals under the age of 18.

Gamba said the agreement was to ensure "no child is recruited and used by any entity operating under its umbrella." The move received immediate reaction from Turkey, as it was regarded as a "grave development" to sit at the table with a terrorist organization known for such brutal actions and even a bit naïve to assume that such a deal would protect the children.

"The signing of an agreement by the U.N., which should be at the forefront in the fight against terror, with a terrorist organization cannot be explained in any way. This is also a clear violation of the U.N.'s own decisions on terrorism," the Foreign Ministry said as a response to the move.

The ministry said the nature of the agreement once again attests to the severe violations of human rights and international law committed by the SDF. "However, it is absolutely unacceptable for the U.N. to negotiate with the bloody terrorist organization to solve this problem," the ministry said. It is also worth mentioning that some U.N. authorities who spoke to the Turkish media claimed that they had no information on such a move.

U.N. spokesman Stephane Dujarric also said in a press conference that Gamba's plan with the YPG-led group "does not imply any legitimacy, political legitimacy, for any armed group that she engages in."

The 1949 Geneva Convention on the Protection of Civilian Persons in Time of War prohibits the use of children under the age of 15 as soldiers.

The YPG's use of child soldiers in its ranks is not a new phenomenon as it has repeatedly been documented and criticized by international human rights organizations. The group reportedly tricks families into giving up their children or kidnaps the children, taking them to training camps, where they are denied contact with their families.

Reports such as the one published by Anadolu Agency (AA) in April, even said that to ensure the commitment of the children, the YPG gets children and youngsters addicted to drugs, so they can later be used as suicide bombers and fight on the front lines.

In March 2018, a YPG training camp in Afrin that was destroyed by Turkish forces in Operation Olive Branch was screened by AA Investigations, which revealed that the camp was a center for training 13- to 17-year-old recruits.

The U.N. also has been aware of this phenomenon for quite some time now and reporting on the issue regularly. In 2018, a U.N. annual report on children in armed conflict revealed 224 cases of child recruitment by the YPG between January and December in 2017, a fivefold increase compared to previous years.

Human Rights Watch (HRW) also documented previously that the terrorist organization continues to recruit children despite objections from families and children while preventing families from getting in touch with their children. The organization documented 59 children soldiers between the ages of 10 and 15, adding that the YPG confirmed integrating children into the organization.