Turkey determined to establish Syria safe zone without US agreement, if efforts fail 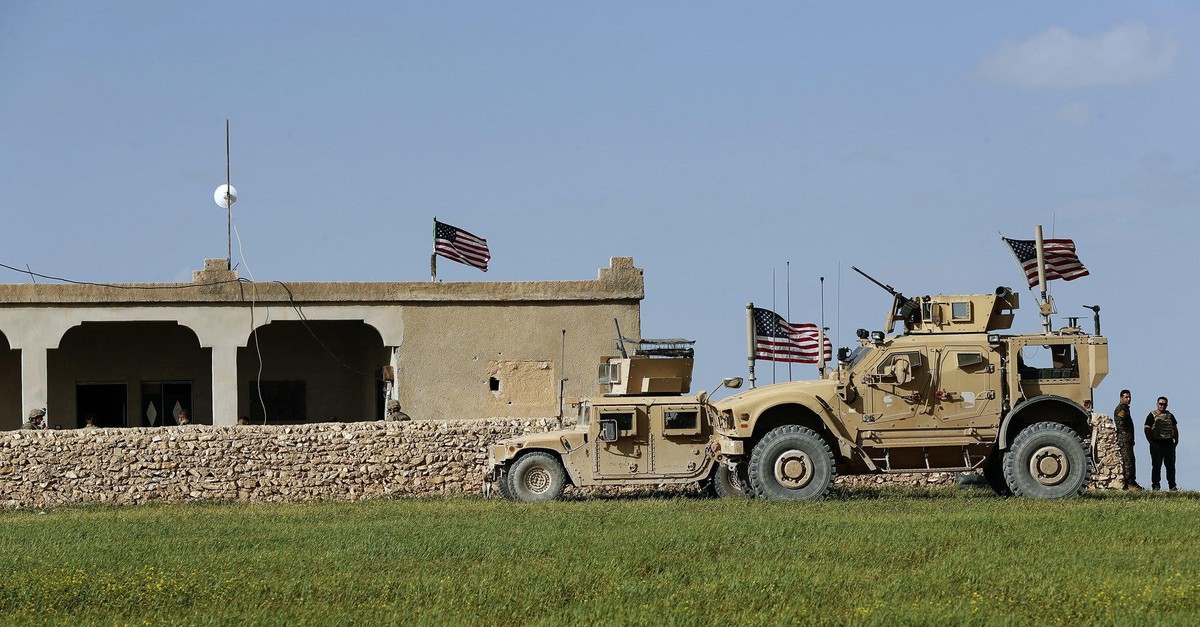 U.S. soldiers sit in front of a house that has been turned into an outpost on a road leading to the tense frontline between U.S.-backed YPG terrorists and Turkish-backed fighters in Manbij, March 29, 2018.
by Daily Sabah with AA Aug 03, 2019 12:07 am

Turkey is determined to bring peace in northern Syria through the establishment of a safe zone and will follow through with the plan regardless of U.S. support

If efforts to find common ground with the U.S. prove unsuccessful, Turkey will have to create a safe zone in Syria on its own, said the Foreign Ministry on Friday. Talks on the issue will continue with a U.S. military delegation due in Turkey next Monday, ministry spokesman Hami Aksoy told a press conference.

On the issue, Turkey expects the creation of a 32-kilometer (20-mile) safe zone in northern Syria, giving Turkey control of this region, which must be cleared of the People's Protection Units (YPG), the Syrian branch of the PKK, he said.

All aspects of the safe zone and the Syrian conflict have been discussed during recent visits to Turkey by James Jeffrey, the U.S. envoy for the anti-Daesh coalition, Aksoy added. But Aksoy warned that Turkey's patience is limited, adding: "We won't let this process be dragged out. If our expectations aren't met, we are fully capable of taking whatever measures [are needed] to ensure our national security." He stressed that Turkey wants to clear the area of all terror elements and establish a "peace corridor."

Military delegation from U.S. to come to Turkey for safe zone talks

It was also stated that a new military delegation from the U.S. would come to Turkey on August 5 to continue talks to establish a safe zone in Syria.

In July, Jeffrey and Turkey's National De​fense Minister Hulusi Akar met in the capital Ankara and agreed to establish a safe zone in northern Syria. But the NATO allies have been unable to reach a consensus on the details of the proposal. Akar also informed his U.S. counterpart in a phone call that Turkey expects the U.S. to completely end its support for the PKK and the YPG.

Akar said Turkey would be obliged to create a safe zone on its own if the countries failed to find common ground, according to a statement released Monday by the National Defense Ministry. Turkey strongly opposes the YPG's presence in Manbij, which has been a major sticking point in strained Turkey-U.S. relations due to the latter's support for the YPG under the pretext of fighting Daesh. The U.S. has provided military training and given truckloads of military support to the YPG, despite its NATO ally's security concerns. To reduce tensions, Turkey and the U.S. agreed on a road map in June 2018 foreseeing the withdrawal of the YPG from Manbij and installing joint Turkish-American patrols, which began in November. However, the process has been sluggish as the terrorist group was still present in the city despite the three-month timetable set for implementing the deal.

Ankara points out that it will not allow the YPG to strengthen its grip in Syria. Turkey is also prepared to launch an operation east of the Euphrates to eliminate the YPG. However, following the U.S. decision to withdraw from Syria, Ankara decided to put the operation on hold. While establishing a safe zone would eliminate some of Turkey's concerns, the presence of the YPG in Syria and its plan to form a quasi-state will continue to present a threat to the country. Until now, Turkey and the U.S. did not discuss in detail where the safe zone would be and what would happen to the YPG militants. Turkish officials had been waiting for Washington to clarify what they meant by the safe zone. As Turkey was waiting for the U.S. to take more concrete steps, Turkey carried out two cross-border operations west of the Euphrates River, Operation Euphrates Shield launched in August 2016 and Operation Olive Branch in January 2018, to drive terrorist groups, including the YPG and Daesh, from its borders.

On the other hand, disagreements over the scope of a safe zone in northeastern Syria and other issues are preventing its implementation, U.S. President Donald Trump's envoy for the anti-Daesh coalition said late Thursday. "The Turks want a deeper zone than the one that we think makes sense," James Jeffrey told reporters at the State Department, noting Washington proposed an area of some 5-14 kilometers along the Syrian border with heavy weapons pulled further back.

He further cited unspecified "differences of opinion" over how the U.S. and Turkey "would operate in that zone."

"We think that this is a deal we can sell to the people of northeast Syria. That's very important," he said.

Jeffrey added that the U.S. is mindful of Turkish security concerns with regards to the "PKK and offshoots of the PKK" but is "equally" committed to protecting the main U.S. partner in northeast Syria from coming under attack. "We are committed to those who have fought with us not being attacked and not being harmed by anyone," Jeffrey said. "That includes our concerns about the Turks."

Meanwhile, U.N. Secretary-General Antonio Guterres on Thursday urged the U.S. and Turkey to broker a mutually agreed plan to institute a safe zone in northeastern Syria.

"We really encourage all parties to come to an agreement to avoid new forms of confrontation that might emerge," Gutteres said in response to questions about safe zone proposals in the region.