Turkey to stand against moves at UN legitimizing YPG/PKK terrorists 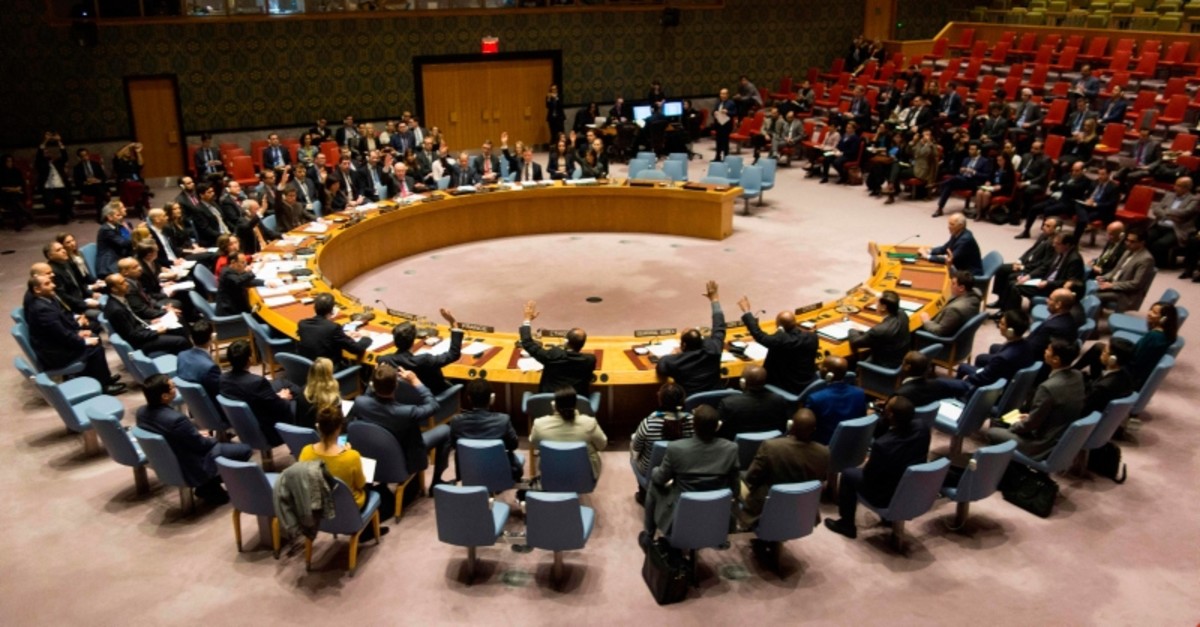 This file photo shows members of the Security Council voting during a United Nations Security Council meeting on a ceasefire in Syria, February 24, 2018 in New York. (AFP Photo)
by Anadolu Agency Aug 03, 2019 12:57 pm

Turkey said on Friday that it welcomed the documentation of PKK crimes and violations in a recent U.N. report, but that it would never accept any moves seeking recognition and legitimacy for the terror group.

Delivering a speech at the UN Security Council, Rauf Alp Denktaş, Deputy Permanent Representative Of the Permanent Mission Of Turkey, said the findings in the report on children in armed conflict was "quite worrying."

Denktaş underlined that the final report of the Secretary-General [Antonio Guterres] detailed horrific treatment against children in areas controlled by the PKK.

"Without doubt, the PYD/YPG is using the same tactics with the terror groups operating in Syria such as Daesh, Al-Qaeda, al-Nusra and other terrorist organizations. It [PYD/YPG] should not be treated differently from these groups and should be condemned at the same level as these groups," he said.

The Turkish U.N. representative added: "The PYD/YPG/PKK is a terror group which has the blood of more than 40,000 people on its hands and should be treated as a terror group and its existence and activities will never be legitimized."

At least 700 children -- most of them are Kurdish -- were abducted by the PKK, according to Turkey's estimates, the representative noted.

The YPG/PKK terror group has recruited 313 children and used schools for military purposes, the U.N. Secretary-General Antonio Guterres said in a report to the U.N. Security Council.

According to the annual Children in Armed Conflict report, nearly 40% of children recruited by the terrorist group were girls, 20 of them being under 15-year old.

The report found that these children had received military training and that 119 girls took part in clashes.

It revealed that the YPG/PKK terrorist group used 24 schools and hospitals as training grounds and 14 schools as ammunition depots.

In 2017, the U.S., which considers the PKK a terrorist group, helped change the YPG's name to the Syrian Democratic Forces (SDF) in order to dissociate it with the PKK.

The annual U.N. report is produced at the request of the U.N. Security Council.