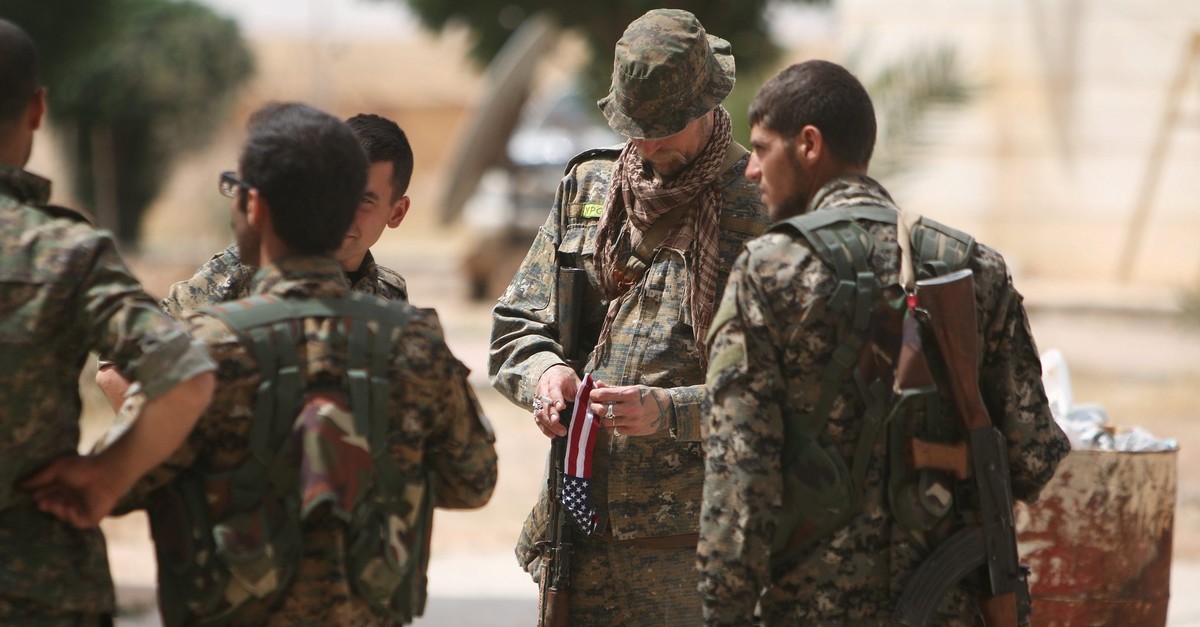 A joint plan for a safe zone in northern Syria constitutes the main agenda of the Turkish-U.S. meeting in Ankara, with the former insisting on steps for the elimination of terrorist elements in the region

Turkey and U.S. military delegations sat at the table once again yesterday in the capital Ankara to try and come up with a road map for a safe zone that would bring peace to northern Syria. The outcome of the talks, according to experts, carry critical importance since it will determine Turkey's imminent actions on the ground. Ankara has expressed several times that it will take action if the U.S. keeps stalling the process instead of responding to its demands on the matter. The meeting between the Ministry of Defense and the U.S. military delegation to establish a safe zone in northern Syria started yesterday in Ankara.

The meeting was dominated by the issue of the safe zone along Turkey's southern border, U.S. cooperation with the PKK's Syrian affiliate, the People's Protection Units (YPG), and allowing the safe return of Syrians. According to The Washington Post, the Trump administration has come with a last offer that would eradicate the YPG from a zone 15-kilometers deep and 145-kilometers long, while also trying to dissuade Turkey from launching another offensive in the region. However, Turkey intends to create a zone of at least 30 kilometers and prefers to have control of the area, stressing that it has shown its success and capability during previous offensives, which secured some parts of the region. Turkey carried out two cross-border operations west of the Euphrates; Operation Euphrates Shield launched in August 2016 and Operation Olive Branch in January 2018, to drive terrorist groups, including the YPG and Daesh, from its borders.

Some negotiations with the U.S. delegation on the safe zone were completed while others are expected to continue today, according to a statement from the National Defense Ministry released Monday.

"In the grand scheme of things, I think that the meeting will result in a positive outcome. Turkey is an indispensable strategic partner of the U.S.; thus, Turkey's concerns have to be answered. Otherwise, the U.S. will be deprived of both regional and global support. This meeting will most probably approach technical details as to where and when the intervention will be launched to eradicate the terrorist organization and ensure the safe return of civilians," said Murat Aslan of Hasan Kalyoncu University's Department of Political Sciences and International Relations.

In 2012, President Recep Tayyip Erdoğan first mentioned a safe zone in northern Syria. The vision of the president for a safe zone seven years ago was to have an area cleared of terrorists, reconstructed and recovered from the damage of war. However, since then people continued to suffer from war despite all efforts and seek refuge in Turkey where the number of Syrian refugees has reached almost 4 million.

Furthermore, the creation of the safe zone by eliminating the YGP presence that poses a threat to Turkey's national security and that of people living in the region, causing constant influxes of refugees who are forced to leave their homes, would also enable war-weary refugees to return to their homelands.

The meeting marks the climax of a years-long dispute about the U.S. backing the YPG, an affiliate of the PKK terrorist organization that has killed more than 40,000 people in its terror-campaign against Turkey, under the pretext of fighting Daesh. The U.S. has provided military training and given truckloads of military support to the YPG, despite its NATO ally's security concerns.

"This process is carried out from more than one wing. Decisions are made on the political level and put into practice on the military level with their own norms and rules about how these decisions will be applied. This meeting could have two meanings, the first of which is that the political level has concluded and now it is to be discussed how it will be applied on the field. The second possibility is that the U.S. is stalling Turkey to gain time," said Nihat Ali Özcan of TOBB University.

Not a first for U.S. to say something, do something else

On the other hand, it is not uncommon for the U.S. to act differently than what it has stated, as other than U.S. President Donald Trump, many other institutions also make their voices heard and mostly opposing Trump, such as when Trump decided to withdraw troops from Syria, which U.S. military forces opposed.

The U.S has to take solid steps regarding issues constituting a direct threat to Turkey's national security. There are two main issues: Ending the U.S.-YPG cooperation and a positive reply to Turkey's demands in terms of the Gülenist Terror Group (FETÖ).

Turkey's S-400 procurement also strained the relationship of the two countries, leading to Turkey being kicked out of the F-35 program, which it was a part of. Though Trump displayed a constructive and moderate attitude to the issues, other U.S. institutions did not.

A U.S. delegation led by U.S. Special Representative on Syria James Jeffrey came to Turkey on July 22. Jeffrey and National Defense Minister Hulusi Akar met in Ankara and agreed to establish a safe zone in northern Syria. But the NATO allies have been unable to reach a consensus on the details. The three-hour-long meeting's main topics were the general situation in Syria, the safe zone and Turkey's exclusion from the F-35 program. Turkey had in the past warned of carrying out military operations east of the river, but put them on hold after agreeing with the United States to create a safe zone along the border, which would be cleared of YPG terrorists. Yet, Ankara is determined to hinder the terrorist group from gaining more power and land in the area. "Reaching a settlement with the U.S. does not mean that we will compromise with the PKK; thus, this does not completely rule out the possibility of a military operation. If the PKK resists and displays adverse behavior, the Turkish Armed Forces (TSK) will not hesitate to answer," Aslan added.