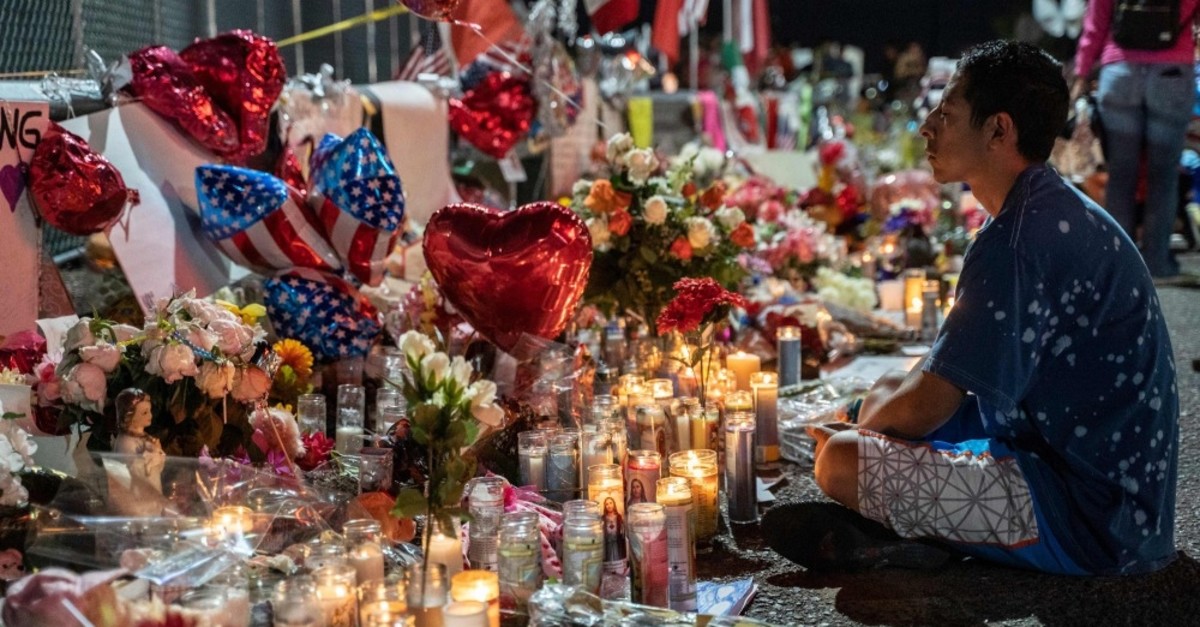 A local resident meditates in front of the makeshift memorial for shooting victims at the Cielo Vista Mall Walmart in El Paso, Texas, Aug. 8, 2019.
by Eralp Yarar Aug 11, 2019 12:00 am

Despite individual acts of racist terrorism representing extreme points on the political spectrum, they are not isolated from larger trends that have become increasingly successful and mainstream across the Western world in recent years

Last week's tragedy in El Paso, Texas was the just the latest in a string of racist, white-supremacist terrorist attacks seen across the West in recent years. While these perpetrators may be on the extreme end of the political spectrum in terms of their behavior, they are not isolated from larger political trends, experts have suggested. Rather, they are a manifestation of broader right-wing and nationalist movements across many Western nations that have relied on xenophobia, anti-Muslim sentiment and other forms of racism to tap into anxiety among white populations and to channel this anxiety into votes and political support. The latest terrorist attack targeting the Latino community in El Paso left 22 civilians dead and more than 20 wounded. Although it was described as a domestic act of white terrorism, it shared similar characteristics with other racist terrorist attacks across the Western world in recent years.

Prior to his violent outburst, the perpetrator posted a so-called manifesto explaining his ideological and political roots to justify his violent act targeting a certain group on the message board on 8chan, which has become the main meeting point for violent extremists online. Started by Fredrick Brennan with the vision of creating a website for limitless free speech in 2013, 8chan has turned to a platform for racist and extremist ideologies since then. Following the news about the latest attack in El Paso, the creator of the online message board described himself as "naive and ignorant," likening the platform 8chan to Frankenstein's monster, with no limits to its extremism.

Expressing his regret over the creation of a hive of white supremacy, anonymous hate and racism since he sold it to a fellow American, Brennan called for the site to go dark. "Shut the site down," he told The New York Times. "It's not doing the world any good," he added.

Eventually, 8chan was effectively knocked offline last Monday after several companies cut off vital technical services in response to the site's links with the terrorist attack in El Paso. Moreover, the site's current owner, Jim Watkins, was invited to the United States last week to give testimony before a legal committee about 8chan's efforts to tackle "the proliferation of extremist content, including white-supremacist content."

El Paso was the "third act of white-supremacist extremist violence" linked to 8chan, committee Chairman Bennie Thompson said in his letter to Watkins.

Yet, the incident in Texas was not the first organized through 8chan and cost people's lives. Previously, the site was used by Brenton Tarrant, who in March attacked two mosques in Christchurch, New Zealand, killing 51 Muslim worshipers and provided inspiration for a shooting a month later of a man at a synagogue in Poway, California.

Looking at all these developments, one question needs to be answered: Why did authorities and companies take so long to take measures against the online organization inspiring such attacks?

Todd Green, a former adviser for the U.S. State Department on Islamophobia, said one reason for the slow response from authorities in the United States was a commitment to freedom of speech. "Particularly in the United States, the legal system gives wide berth to people voicing unpopular opinions. This includes what we might think of as hate speech," he said. He also underlined that authorities are also struggling with grasping the real threat posed by white supremacists.

"Particularly since 9/11, government-sponsored counterterrorism and countering violent extremism initiatives in many Western nations have overwhelmingly focused on Muslim extremists. This has remained the case even when we have data pointing to the much greater threat of right-wing or white-nationalist violence. For example, 98% of extremist-related murders in the United States last year were committed by right-wing extremists," he said, adding that law enforcement and intelligence agencies direct most of their financial and human resources toward extremists who claim to be Muslims.

Craig Considine, a sociology lecturer at Rice University, also underlined the difficulty of tracking the fast-paced nature of social media forums and individual attackers for authorities as well as the sensitive political nature of freedom of speech. Aydın Enes Seydanlıoğlu, a Germany-based author, said the motivations of "lone wolves" are different than other terrorist groups; therefore, it is very difficult for authorities to develop strategies to prevent their actions.

by exploiting sense of threat

Another important point that we must also recognize that there are many conservative politicians in the United States whose careers have depended on hyping the threat posed by Muslim extremists and stirring up Islamophobia, said Green.

"Islamophobia has increasingly become a core part of the Republican Party's platform. Politicians such as Donald Trump and Ted Cruz rely heavily on Islamophobia to galvanize supporters and to leverage voters. They and other like-minded politicians have worked hard to keep the focus off of right-wing and white-supremacist forms of violence and to keep our attention on the presumed dangers posed by Muslims and Islam," he added. Seydanlıoğlu noted a similar point, saying: "There are some politicians, bureaucrats and lawmakers in state institutions who support or even represent racist ideologies. In such an environment, how can we expect them to take necessary measures against such racist attacks?"

A manifesto denouncing a "Hispanic invasion," said to have been written by the young white male American suspect in the El Paso attack, was posted on 8chan shortly before he gunned down 22 people and wounded more than 20 others. In the document titled "The Inconvenient Truth," he wrote that the attack "is a response to the Hispanic invasion of Texas."

He claimed he was "defending" the United States "from cultural and ethnic replacement brought on by an invasion" by making references and expressing support to the Christchurch shootings in New Zealand.

The El Paso massacre was the latest attack in which the gunman appears to have praised and been inspired by the March 15 shootings in Christchurch.

These mass shootings also paralleled with that of Anders Breivik, the Norwegian far-right terrorist who killed 77 people in 2011. Breivik had also shared a manifesto claiming the existence of an ongoing genocide against white Europeans. Tarrant described Breivik as his only true inspiration.

Racist attacks part of an organized

Last week, NATO Secretary-General Jens Stoltenberg visited Christchurch and laid a wreath at a memorial outside the Al Noor mosque, where 42 worshipers died. While there, Stoltenberg spoke about links between attacks in Christchurch, El Paso and Norway.

"These attacks are committed by lone wolves, but they are at the same time connected," Stoltenberg said. Referring to many racist attacks perpetrated by white supremacists in the past decade, Green said that we must reject the simplistic notion that these perpetrators were "lone wolves."

"In many instances of white-nationalist and white-supremacist violence, individual perpetrators are influenced by other racist individuals and communities," he explained.

He also underlined that these attacks serve as inspiration for others.

Seydanlıoğlu also underlined that even if these lone wolf attackers act independently without a leader, they have political motivations related to a specific group with an organized and systematic manner. Therefore, even if their actions are independent, they serve for the aims of an international organization, he added. "Most of these kind of terrorist attacks are carried out by 'lone wolves,' but these kind of individuals are inspired by racist movements that are global in nature," Considine said. Recalling that the El Paso attacker praised the murder of Muslims in Christchurch, he added, "These two terrorists had never met each other, but they shared a similar ideology, which was available over the internet. So wh

ite supremacy, like other forms of discrimination and racism, does not care for national borders." It is obvious that all these racist terrorist attacks are part of an international organized movement affected by larger political trends rather than independent domestic individuals. However, Green's opinions provide a pessimistic perspective. "These movements have become increasingly successful and mainstream, as we have witnessed in European politics and in the election of Donald Trump to the U.S. presidency. They are a manifestation of broader right-wing and nationalist movements across many Western nations that have relied on xenophobia, Islamophobia and other forms of racism to tap into anxiety among white populations and to channel this anxiety into votes and political support," he said.