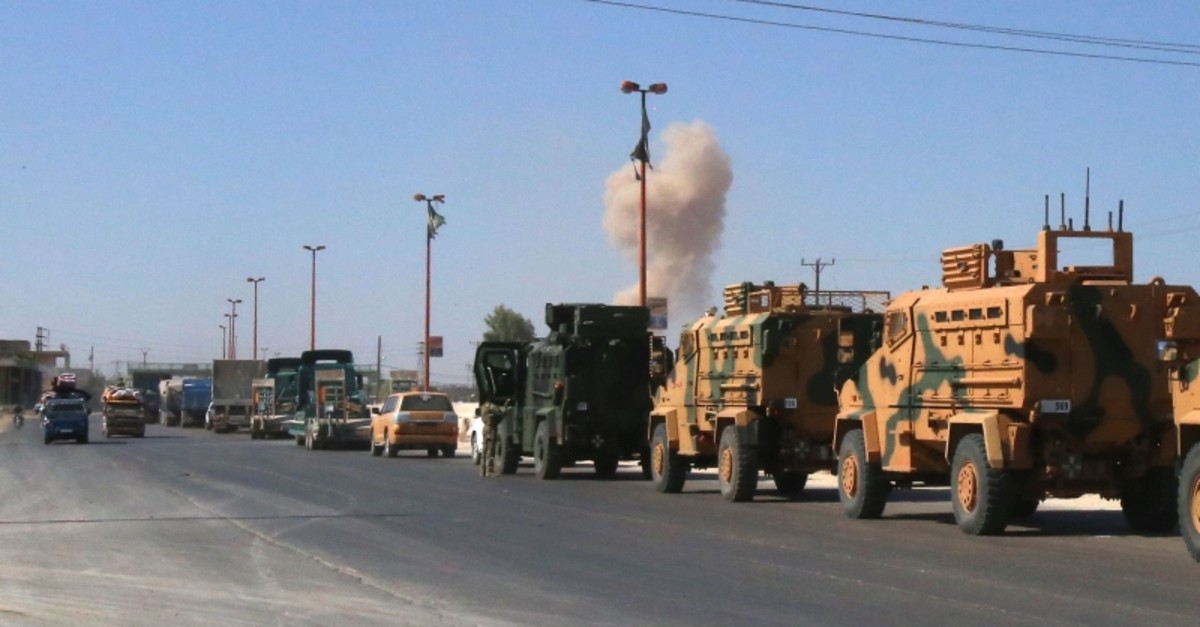 A plume of smoke rises above buildings during an air strike by Syrian regime forces as a Turkish military convoy passes through Maarat al-Numan in Syria's Idlib reportedly heading toward the town of Khan Sheikhoun, on August 19, 2019. (AFP Photo)
by Daily Sabah with Agencies Aug 19, 2019 1:32 pm

A Turkish military convoy which crossed into northwest Syria on Monday to head for the observation points near the key town of Khan Sheikhoun, where Assad regime forces are fiercely battling opposition groups, came under attack of regime jets. 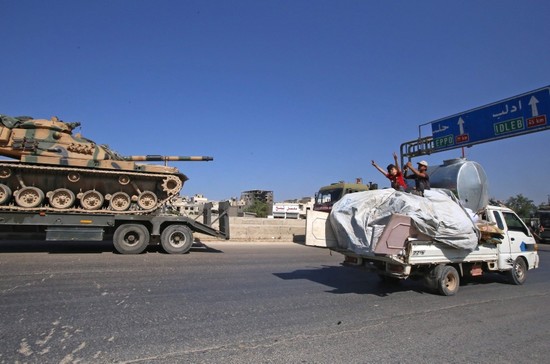 On Sunday pro-regime forces entered Khan Sheikhoun in Idlib province for the first time since they lost control of it in 2014. The advance not only threatens the town, in opposition hands since 2014, but also to encircle insurgent fighters in their only patch of territory in neighboring Hama province. Regime forces are battling to seize a key highway connecting regime-held Damascus with the northern city of Aleppo, which the regime retook from opposition groups in December 2016. Pro-regime forces arrived at the northwest flank of the town under heavy airstrikes and were fighting to march into it, the Syrian Observatory for Human Rights said. Residents said warplanes pounded the town and nearby positions during the night. The roads and the countryside between Khan Sheikhoun and Maarat al-Numan, a major town located some 20 kilometers north.

Ankara backs moderate opposition groups in the northwest and has deployed forces into the Idlib region under Astana peace process deal with Russia, Syrian leader Bashar Assad's most powerful ally, and Iran, which backs the regime through militia on the ground.

The Idlib region is supposed to be protected from a massive regime offensive by a buffer zone deal signed between Russia and Turkey in September. But it was never fully implemented, as terrorist groups including the Al-Qaida-linked Hayat Tahrir al-Sham, formerly known as the Nusra Front, refused to withdraw from the planned demilitarized zone and instead increased their grip in the region. 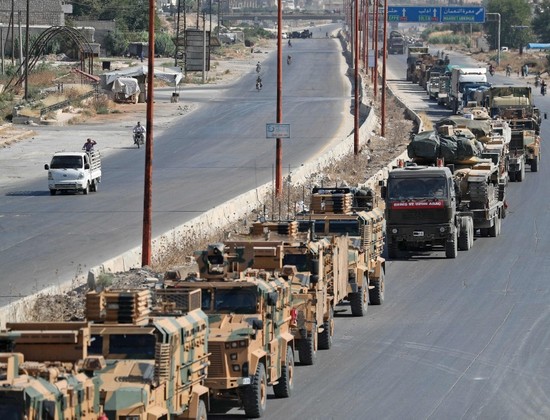 The Turkish Defense Ministry issued a statement Monday saying that three civilians were killed and 12 more were wounded in the airstrikes targeting the convoy. "Despite repeated warnings we made to the authorities of the Russian Federation, the military operations by the regime forces continue in Idlib region in violation of the existing memorandums and agreements with the Russian Federation, causing great harm to the civilian / innocent people and gradually turning into a humanitarian drama," the statement said.

"In the face of these ongoing operations in violation of all memorandums and agreements threatening the supply route to the Turkish Observation Point No. 9, a deployment of our forces was started on August 19, 2019 at 5.30 am with advance information supplied to the Russian Federation, in order to keep the supply routes open, to ensure the safety of our observation post and to prevent further loss of civilian / innocent lives in the region."

"During the transit, an air strike launched on our convoy at 08.55 a.m. caused 3 civilians to lose their lives and left 12 civilians wounded."

"We strongly condemn this attack which contradicts the existing agreements, cooperation and dialogue with the Russian Federation. Without prejudice to our rights to self-defense, we expect the necessary measures to be taken to prevent recurrence of such incidents."

The Syrian Observatory for Human Rights, a Britain-based war monitor, reported Syrian regime and Russian airstrikes aimed at hindering the convoy's advance through Idlib province. A witness said a Turkish military convoy, with opposition allies, entered Idlib on Monday but was stopped because of heavy bombing there. 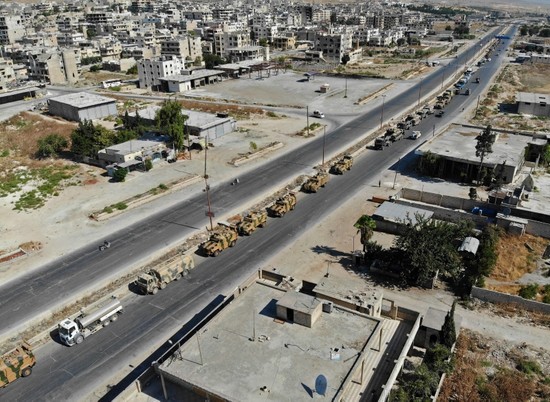 A picture taken on August 19, 2019 shows an aerial view of a convoy of Turkish military vehicles passing through Maarat al-Numan. (AFP Photo)

The Assad regime slammed the action. "Turkish vehicles loaded with munitions... are heading toward Khan Sheikhoun to help the terrorists," a foreign ministry source quoted by the state news agency SANA said.

The latest fighting, which broke out overnight Saturday to Sunday, has already killed at least 59 opposition fighters as well as 28 members of pro-regime forces, the Observatory said.

Colonel Mustafa Bakour of the Jaish al-Izza opposition faction said battles raged on the outskirts of the town. Fighters arrived to reinforce the frontline, he said, including some from the National Army, a Turkey-backed opposition group based further north near the border.

On Sunday regime forces retook the village of Tel al-Nar and nearby farmland northwest of Khan Sheikhoun before closing in on the town, Observatory head Rami Abdel Rahman said.

They then advanced into the northwestern districts of the town amid "ferocious resistance" from opposition groups, he said.

HTS controls most of Idlib province as well as parts of the neighboring provinces of Hama, Aleppo and Latakia.

Since a brief cease-fire collapsed this month, the Syrian regime army has closed in on Khan Sheikhoun from the east and west.

Regime and Russian air strikes and shelling since late April have killed more than 860 civilians, according to the Observatory, which relies on sources inside Syria for its information.

On Sunday air strikes by the Syrian regime and its ally Russia killed two people, including a child, in the south of Idlib, the Observatory said.

More than 1,400 insurgents and over 1,200 pro-regime forces have been killed since April, according to the monitor.

Hundreds of thousands of Syrian civilians have fled toward the Turkish border, the United Nations says.

Khan Sheikhoun, along the M5 highway stretching from the capital Damascus to Aleppo city, was bombed with sarin in 2017, an attack that killed dozens of people, wounded hundreds of others and prompted a U.S. missile strike.

An investigation by the United Nations and the Organisation for the Prohibition of Chemical Weapons blamed the attack on the Syrian regime. Damascus denies using such weapons.

"Many of these people have been displaced up to five times," the U.N.'s regional spokesman for the Syria crisis, David Swanson, told AFP on Saturday.

"Ongoing clashes, shelling and air strikes, including the use of barrel bombs, continue unabated" and have damaged schools and hospitals, he added.

The three-month campaign of airstrikes and shelling has killed more than 2,000 people on both sides, mostly civilians in Idlib were killed by the regime and Russian airstrikes and causing the displacement of almost 400,000 people. The United Nations says dozens of health centers and schools have been targeted.

The refugee wave from Idlib toward the Turkish border, which was triggered by the regime advance, continued yesterday as thousands more left their home. Speaking to Anadolu Agency, Mohammed Hallac, president of the Syria Intervention Coordinators, said that Khan Sheikhoun is completely devastated by regime attacks targeting civilian areas since February. "Eight schools, three medical centers, a civil defense center and three bakeries have been targeted in regime and Russian airstrikes," he said. Hallac added that Khan Sheikhoun's population, which was nearly 100,000 before the offensive, has currently dwindled to almost zero.

Syria's conflict has killed more than 370,000 people and displaced millions at home and abroad since starting with the brutal repression of anti-regime protests in 2011.