Turkey will not allow democracy to be used as a Trojan horse by terror supporters: Interior Minister Soylu 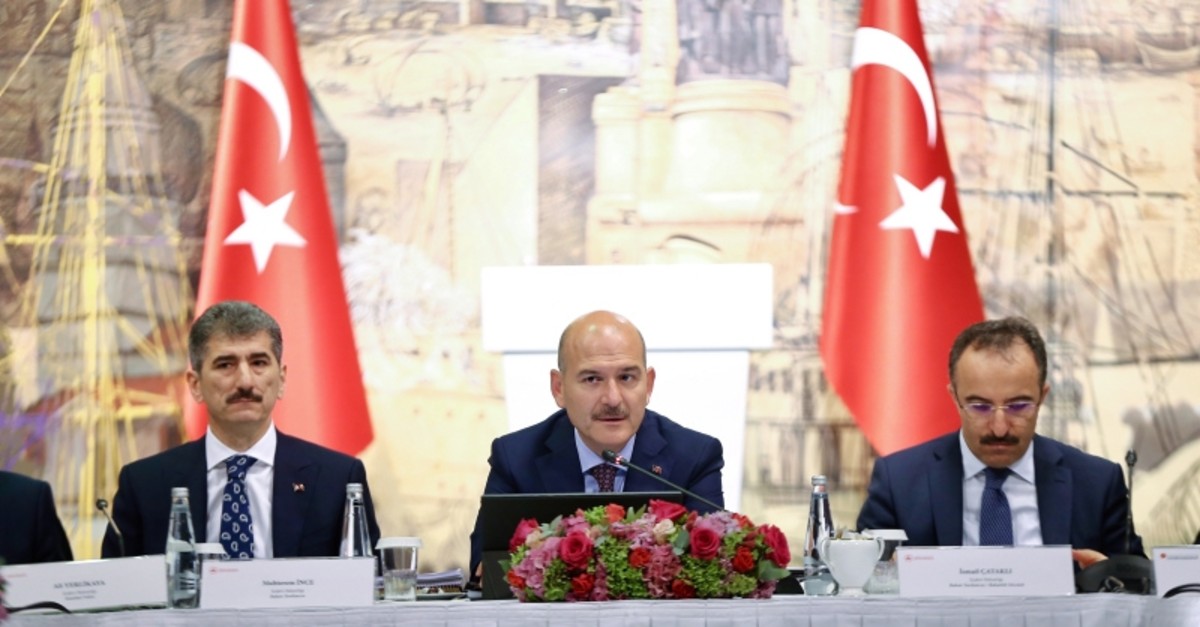 The suspension of mayors due to terror links and the assignment of state-appointed bureaucrats as acting mayors is completely in line with the constitution, international law and public conscience, said Interior Minister Süleyman Soylu on Wednesday.

Addressing foreign press representatives in a closed meeting at the Dolmabahçe Presidential Working Office in Istanbul, Soylu commented on the suspension of three mayors from the Peoples' Democratic Party (HDP) due to their alleged links to the PKK terror group.

According to an official statement by the Interior Ministry on Monday, the mayors of Diyarbakır, Mardin and Van provinces – Adnan Selçuk Mızraklı, Ahmet Türk and Bedia Özgökçe Ertan, respectively – have been suspended for supporting terrorism. The state-appointed governors of the provinces will temporarily replace suspended mayors as trustees.

The statement added that the mayors already had active cases against them in which they were accused of crimes such as establishing or spreading propaganda for a terror group or else just being a member.

Underlining that these mayors from the HDP continued the same practices that caused them to be dismissed from their duties in the last term, Soylu described their stance as a challenge against the state, the law and the unity of the nation.

"We will not allow democracy to be used as a Trojan horse by terrorism supporters," said Soylu and added that these mayors exploited the authority given to them by the people for the interests of the terrorist organization.

In the face of such insubordination, the state had to take necessary legal measures, said Soylu and added that the practice of suspension and the appointment of state bureaucrats are the constitutional right and duty of the ministry and in line with international law.

The HDP has many times drawn fire for transferring taxpayers' money and funds to the PKK, a globally recognized terrorist group. HDP mayors and local officials have been found to misuse funds in support of the PKK terrorist group and provide jobs to PKK sympathizers. Its mayors have also been accused of undermining municipal services, allowing the PKK to dig ditches on the streets and launch attacks against police and soldiers when the terrorist group adopted an urban warfare strategy in July 2015 and ended a two-year reconciliation period. HDP municipalities and their staff were also found to be actively participating in terrorist attacks launched after July 2015.

As a result, Turkey removed the elected administrations of 93 municipalities in the region for their links to the PKK terrorist group and appointed trustees to these municipalities in 2016 in the aftermath of the coup attempt launched by the Gülenist Terror Group (FETÖ). Mardin Mayor Türk was among the mayors replaced by trustees at the time while Van and Diyarbakır were among trustee-assigned municipalities.

Reminding the press that similar practices occurred in Turkey's democracy history and Western countries such as Spain, Soylu asked: "If the mayors of London or Paris actively supported terrorism and terrorist organizations, what would the U.K. or France do?"

"It was impossible for us to tolerate what was going on in these municipalities," he added. 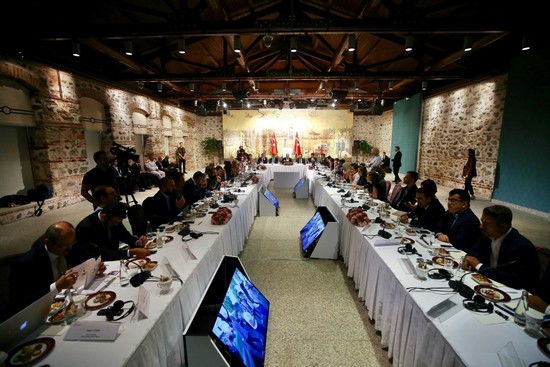 People in the region don't approve of municipalities' support of terrorism

Responding to a question about the local people's electoral support to the HDP in the region, Soylu said that their support in elections does not mean that they approve the HDP's links with terrorism.

"In the region, people who do not support the ruling party, usually vote for the HDP. Because the HDP is the only other option in the region. However, elected HDP officials exploit people's votes for the interests of the terrorist organization and harm the national will," said Soylu and added that it is the state's job to end this exploitation of democracy in favor of terrorism.

He also stated that the satisfaction rate of people with the state-appointed acting mayors in the last term was between 60-70 %.

Commenting on the opposition parties' criticism against the suspension of elected mayors, Soylu said that these criticisms are based on politically motivated arguments to attack the government, not legal arguments.

The issues of terror and migration are the two most challenging issues for the world to deal with, said Soylu and added that Turkey is a country taking on the most responsibility around these issues.

"Although the whole world shares a common fate against these two issues, the stance of the Western countries causes disappointment for us," he added.

On the lack of stability, security and sufficient life conditions on their countries, these people have to migrate, said Soylu and added that unfortunately, migration and terror trigger each other and create a global network threatening the whole world.

Remarking that radicalism and extremist ideologies have been fueled in such a global environment, he said: "Although the West seems to fight extremism, they actually use it for their political agendas."

Underlining the strategic location of Turkey, Soylu said: "Turkey is in the middle of this network of problems caused by migration and terrorism."

"Turkey is both the target and the transition country for irregular passing," he added.

According to stats given by the minister, 211,000 irregular immigrants have been caught trying to pass from Turkey in 2019 and 70% of the workload of the coastal security units in Turkey is to handle the issue of irregular migration.

Reminding reporters that the West did not take the issue of migration seriously until 2015, Soylu said the West understood in 2015 that they will be also affected by the global migration wave and panicked.

"Until then, they wanted to use some countries like Turkey, Lebanon and Jordan as a store for immigrants," he added.

Soylu also said that Turkey continues its open-door policy for Syrians and all refugees based on its humanitarian responsibilities.

He stated that Turkey hosted 485,000 more Syrians in 2017 and added that some Syrians began to voluntarily return to their hometowns in Syria which Turkey had cleared from terrorist elements and provided security and stability.

Turkey carried out two cross-border operations west of the Euphrates River, Operation Euphrates Shield launched in August 2016 and Operation Olive Branch in January 2018, to drive terrorist groups, including the People's Protection Units (YPG) and Daesh, from its borders.

Soylu said that almost 110,000 Syrians returned home in the last bayram and added that no one will be deported against their will.

Underlining that there is a growing xenophobia threat in Western countries, he said that Turkey is the most active country hosting regular immigrants.

"We cannot let them return as long as there is a threat of death," said Soylu.

Turkey has been always sincere in the fight against terrorism without any discrimination, said Soylu, criticizing the insincere stance by Western countries.

"Turkey has been fighting against terrorism for decades. However, Turkey could not get enough support from other countries in its war on terror," he said and added that some most-wanted terrorists by Turkey are being protected and not extradited by certain Western countries. Some countries actively support the PKK and YPG in the pretext of fighting Daesh.

Soylu also sarcastically thanked the United Nations for signing an agreement with the YPG. "Even if they saw the YPG as a legal actor, they showed the world an example that the YPG is a terrorist group which recruits children."

He was referring to an agreement that was signed between the United Nations and the Syrian Democratic Forces (SDF), which is controlled by the People's Protection Units (YPG) terror group in Syria, to end the recruitment of child soldiers.

In response to a question about the state's other initiatives than military operations to end PKK terrorism, Soylu said, "In the region, there is a political environment created in the last 40 years. People could not identify themselves with their own identities and there was also a lack of economic development. We must confess, the terrorist organization exploited this environment well. Now, we abolished this environment with humanitarian development. In addition to military operations, we talk with families of terrorists to convince them to surrender."

As Soylu stated, 149 terrorists surrendered in the last year through the method of persuasion. In the last two years, less than 100 people joined the terrorist group. In 2014, this number was more than 5,000 because the PKK used the resolution process for recruitment.