Mother protests HDP for abduction of her son by PKK terrorists 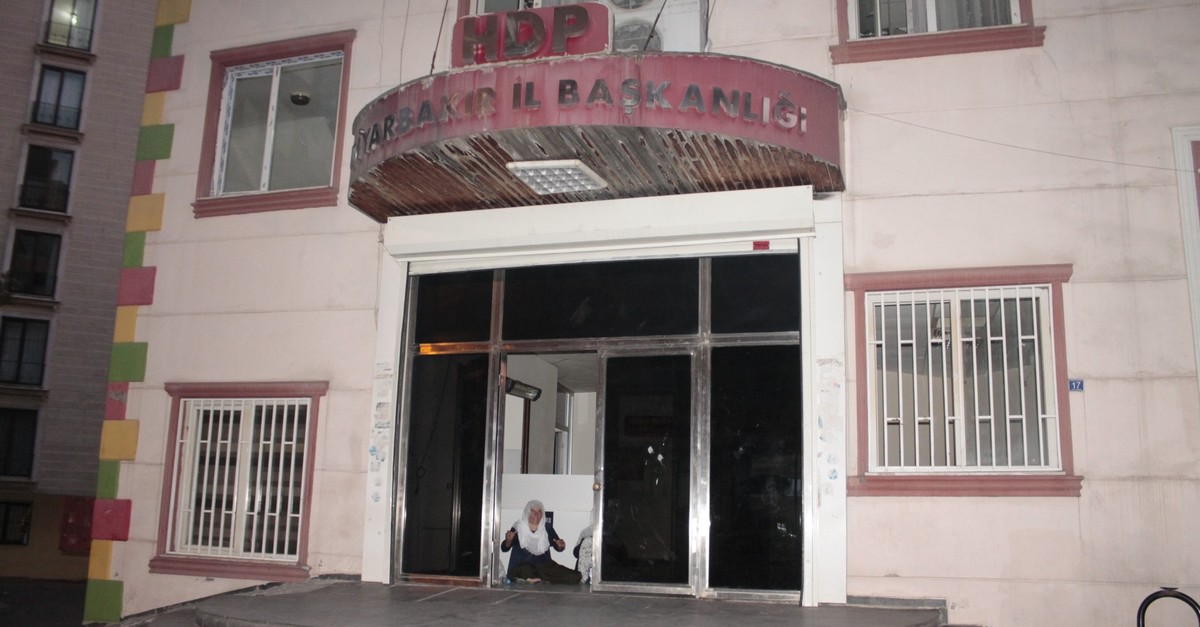 Seventy-year-old Hacire Akar, who claims her son was abducted by the PKK, carried out a sit-in protest in front of the pro-PKK Peoples' Democratic Party provincial headquarters

A mother whose son has been missing for three days claims he was abducted by the PKK. She is now conducting a sit-in protest in front of the pro-PKK Peoples' Democratic Party's (HDP) provincial organization in southeastern Diyarbakır province. Seventy-year-old Hacire Akar spent the whole night outside and stated insistently that she will continue her protest despite obvious fatigue. Asserting that her 21-year-old son was forcibly taken to the mountains, she told reporters in Kurdish, "My son entered the HDP provincial building and did not come out." The HDP is known for its support and close links to the PKK terrorist organization.

Akar, who went to the police station Thursday and filed a missing person's report for her son and a criminal complaint about the HDP, then headed to the party building. In a state of grief and anger, she smashed one of the building's windows and started a sit-in protest, stating that she would not leave until her son is found. What is more, it was revealed that her other son, Fırat Akar, was also abducted by PKK terrorists in 1994 and found dead in the mountains in 2017. "I was not even able to see the body of my son," she said. "Once one enters this building, no one can escape. The HDP is taking our children to the mountains with the help of drugs, pills and medication. It is a place of carnage, savages and oppressors," she stated while complaining of a lack of support from rights activists.

"Where are human rights? Why don't they call these self-seeking people into account?" she said.

During Akar's protest, a HDP official leaving the building became agitated at the journalists, who were following the sit-in. Upon being asked for a statement, the man ardently yelled: "What statement are you asking for? It is just a woman, a mother sitting here. Go away." After the incident, he was pulled into the building by other party members.

Some representatives of NGOs in Diyarbakır visited Akar to support her protest. The provincial head of the Confederation of Public Servants Trade Union (Memur-Sen) Yunus Memiş said "We call on HDP authorities to return this young man to his family as soon as possible. Putting as gun in his hand is neither proper in terms of humanitarian values nor in terms of Islam or ethics."

Memiş added that the case vindicates the dismissal of HDP mayors facing terrorism-related accusations in three southeastern cities. Similar events have taken place previously and have continued since the PKK started its more than 30-year terror campaign against Turkey, responsible for the deaths of some 40,000 people, including women, children and infants. The PKK's death toll kept growing when the terrorist group adopted an urban warfare strategy in 2015 to carve out enclaves within Turkish territory, all the while using the local population as human shields and the experience obtained by their Syrian offshoot, the People's Protection Units (YPG), during the civil war in S

yria. In 2011, families whose children were kidnapped by the PKK terrorist organization once again gathered for a sit-in protest in Diyarbakır to show their reaction toward HDP officials. Nongovernmental organization (NGO) representatives were also present at the protest and pointed out that abducting a child for war and conflict falls in the U.N.'s category of crimes against humanity. Blaming the HDP for being indifferent to the fact that children are given guns and trained for war, the protesters voiced their anger and asked the government for help. The PKK and YPG have admitted to recruiting children between the ages of 11 and 16 for terrorist activities in the beginning of July in a meeting with a U.N. representative. Virginia Gamba, the U.N. secretary-general's special representative on children in armed conflicts, met with a YPG terrorist in Geneva and signed a deal to end the recruitment of child soldiers. However, the incidents of abductions to recruit soldiers for terrorism reportedly still continue.

A few days earlier, on Aug.19, the HDP mayor of Diyarbakır along with those of the provinces Van and Mardin were dismissed due to links to the PKK terrorist organization. According to a statement by the Interior Ministry, mayors Adnan Selçuk Mızraklı, Ahmet Türk and Bedia Özgökçe Ertan have been suspended for supporting terrorism. The state-appointed governors of the provinces are temporarily replacing the suspended mayors as trustees. It was announced that the mayors already had active cases against them in which they were accused of crimes such as establishing or spreading propaganda for a terror group or being a member. All three mayors were members of the HDP and were elected to their posts in the March 31 local elections. With the latest move, mayors linked to the HDP remain in control in cities in only five eastern provinces, namely Batman, Iğdır, Hakkari, Kars and Siirt. Ahead of the March election, Interior Minister Süleyman Soylu had said 178 candidates were being investigated over alleged PKK links. President Recep Tayyip Erdoğan at the time warned that HDP mayors could again be dismissed if they, like their predecessors, were deemed to have ties to militants.

The HDP has many times drawn fire for transferring taxpayers' money and funds to the PKK, a globally recognized terrorist group. HDP mayors and local officials have been found to misuse funds in support of the PKK terrorist group and provide jobs to PKK sympathizers. Its mayors have also been accused of undermining municipal services, allowing the PKK to dig ditches on the streets and launch attacks on police and soldiers when the terrorist group adopted an urban warfare strategy in July 2015 and ended a two-year reconciliation period. HDP municipalities and their staff were also found to be actively participating in terrorist attacks launched after July 2015.