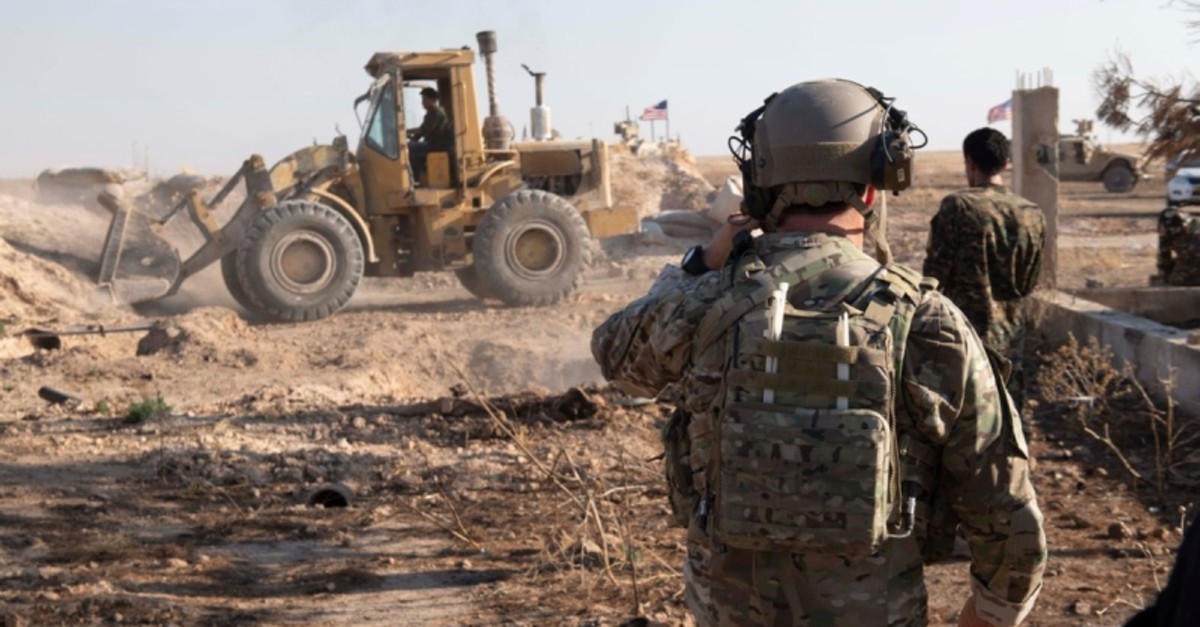 This file photo dated Aug. 23, 2019 and provided by the US Central Command Twitter account (@CENTCOM) shows military fortifications of the SDF being removed.
by Compiled from Wire Services Aug 27, 2019 4:28 pm

The regional administration in northern Syria dominated by the PKK's Syrian affiliate says the People's Protection Units (YPG) terrorists have started withdrawing from a town near Turkey's border.

The withdrawal is concerned with a 5 to 14 kilometer-wide strip along the border, Mustafa Bali, a member of the terrorist YPG-dominated Syrian Democratic Forces (SDF), said Tuesday.

The first step began three days ago in Ras al-Ayn, from where YPG terrorists withdrew with their heavy weapons and removed some earth mounds.

On Monday, they repeated the same steps in Tal Abyad, "showing the seriousness of our commitment to current understandings" on the buffer zone.

The town is located across Akçakale district in Turkey's southeastern Şanlıurfa province, where a U.S.-Turkey operations center aimed at creating the buffer area was recently established.

As per U.S.-Turkish talks for a safe zone in northeastern Syria, the width of the border strip will vary and will include rural areas or military positions, not cities or towns, Bali told Reuters.

It says the YPG's positions were taken over by local forces, without elaborating.

The U.S. Central Command (CENTCOM) previously issued a statement on Aug. 23 and said "Within 24 hours of the phone call between United States Secretary of Defense (SECDEF) and Turkish Ministry of Defense (MINDEF) to discuss security in northeast Syria, the SDF destroyed military fortifications, Aug. 22. This demonstrates the SDF's commitment to support implementation of the security mechanism framework" on the official Twitter account.

A source familiar with the talks told Reuters that although Washington and Ankara were still discussing how deep the zone would go, they had agreed to start work on one stretch of the border.

"The safety mechanism arrangement is being implemented in phases," the source said, adding that arrangements would vary at different parts of the border.

The source said U.S.-Turkish joint patrols will monitor the removal of heavy weapons, fortifications and tunnels, along with YPG presence between the two Syrian border towns about 100 kilometers (60 miles) apart.

That stretch is around a quarter of the whole border that could be covered by the zone, which Turkey says should extend 32 kilometers (20 miles) inside Syria.

A senior Turkish official said Ankara and Washington had bridged some, but not all, of their differences.

"There was a rapprochement, but our insistence on the 20 miles persists. The United States has taken steps to improve this, but they are still not enough," the official said. "It is not possible for us to accept the SDF's presence there."

Turkey has been pressing for a safe zone, running east of the Euphrates River toward the Iraqi border, to push U.S.-allied YPG terrorists away from its frontier. On Monday, Turkey's President Recep Tayyip Erdoğan said Turkish troops would soon enter northeast Syria.

"Our armed drones, drones and helicopters are in the region," he said.

"We expect our ground troops to enter the region very soon," he told supporters in eastern Turkey.

The SDF, with the YPG at its forefront, controls much of north and east Syria, after seizing territory from Daesh terrorists in a campaign backed by U.S.-led coalition.