Ankara determined to eradicate terrorists east of the Euphrates 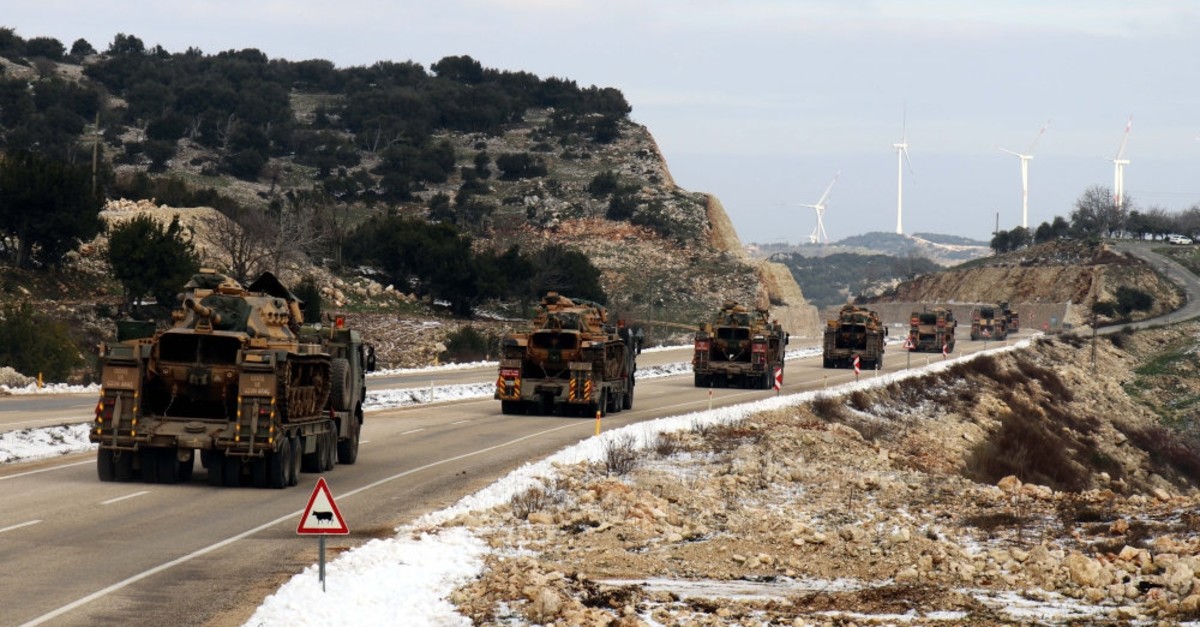 Turkey has been deploying military vehicles and equipment near the Syrian border for a possible operation east of the Euphrates.
by Daily Sabah with AA Sep 03, 2019 12:02 am

As Turkey waits for the U.S. to take concrete steps in the establishment of a safe zone in northern Syria, Ankara reiterated its determination to clear the east of the Euphrates from terrorist elements

Turkey reiterated its determination to eliminate all terrorist entities east of the Euphrates amid ongoing talks with the U.S. to establish a safe zone in northern Syrian territories.

"The east of Euphrates is on our agenda now. We are determined to clear the terror nests," President Recep Tayyip Erdoğan said Sunday in an event organized by the Justice and Development Party (AK Party) provincial organization in central Turkey's Konya.

On Aug. 7, Turkish and U.S. military officials agreed to set up a safe zone and develop a peace corridor running from the Euphrates River to the Iraqi border to facilitate the return of displaced Syrians currently living in Turkey and provide security for Turkish border settlements and military outposts. They also agreed to establish a joint operations center. The agreement envisages the setting up of measures necessary to address Turkey's security concerns.

The U.S., which has designated the PKK as a terrorist organization, still allies itself with the PKK's offshoot, the People's Protection Units (YPG). By establishing the safe zone in northern Syria, Turkey hopes to resettle displaced Syrians and clear out the PKK and YPG elements currently present in the region.

Erdoğan stressed that Ankara ensured the security of Turkish people with Operation Euphrates Shield and Operation Olive Branch. He added that it would not be possible for Turkey to prevent the "terror corridor," if it did not carry out these military offenses.

Turkey carried out two cross-border operations west of the Euphrates, Operation Euphrates Shield, launched in August 2016, and Operation Olive Branch in January 2018. The aim was to drive terrorist groups, including the YPG and Daesh, away from its borders.

The president added that Ankara concurrently carried out Operation Claw to eliminate PKK terrorists holed up in northern Iraq.

"The PKK's capability to take action has been decreased with our increasing military presence in Syria and Iraq," Erdoğan said.

Operation Claw-3, which is the follow up of two previous operations, was initiated on Aug. 23 in the Sinat-Haftanin region in northern Iraq. The operation was launched to facilitate border security, eliminate the presence of terrorists and destroy terrorist caves and shelters in the region.

Operation Claw-1 was launched on May 27. It aimed to prevent the infiltration of PKK terrorists onto Turkish soil from Hakurk and spoil their settlement plans in the area. On July 13, Turkey launched Operation Claw-2 as a follow-up to Claw-1, which revealed new information on terrorist activities.

The Turkish military has recently increased its deployment near the Syrian border, including heavy weaponry, armored vehicles and tanks, as it prepares for an imminent offensive against the PKK and the YPG.

Turkey has long been delaying a possible operation east of the Euphrates to end the presence of U.S.-backed YPG terrorists, which Ankara says pose a grave security threat due to their affiliation with the PKK that is responsible for the deaths of 40,000 in its nearly 40 years of terrorist attacks against the state.

For the safe zone plan, Ankara wants the Turkish military to enter 15 kilometers into Syrian territories in the first phase, while Washington is dragging its feet by putting forth a joint training formula. Turkish officials previously said that it has been patient for some time but "its patience has an end."

The U.S. has primarily partnered with the YPG in northeastern Syria in the fight against Daesh. Turkey strongly opposes the YPG's presence in northern Syria, which has been a major sticking point in strained Turkey-U.S. relations due to the latter's support for the YPG under the pretext of fighting Daesh. The U.S. has provided military training and given truckloads of military support to the YPG, despite its NATO ally's security concerns.

To reduce tensions, Turkey and the

U.S. agreed on a road map in June 2018, foreseeing the withdrawal of the YPG from Manbij and installing joint Turkish-American patrols, which began last November. However, the process has been sluggish as the terrorist group was still present in the city despite the three-month timetable set to implement the deal.

Turkey's own plans ready if US stalls on safe zone

Justice and Development Party (AK Party) Spokesperson Ömer Çelik underlined yesterday Turkey's preparations to implement its own plans if the U.S. stalls on the safe zone as they did once before.

Addressing the press after the party's Central Executive Committee (MYK) meeting, Çelik said that Turkey's priorities are to protect the territorial unity of Syria, the sovereignty of Syrian people and the national security of Turkey.

"We are following the developments closely," Çelik said, adding that the YPG must be cleared from the safe zone region and Syrians should be able to return safely.

He also added that the planned safe zone must be under Turkey's control.

With the safe zone plan, Turkey aims to alleviate its burden of more than 4 million refugees by placing some in suitable areas to be established in territories currently held by the YPG. Ankara has long been in partnership with international organizations on the refugee issue.

Grandi is scheduled to meet with Foreign Minister Mevlüt Çavuşoğlu and is set to hold high-level meetings, according to a statement by the ministry. "The said visit will be important to discuss preparations for the Global Refugee Forum, which will be co-convened by Turkish President Recep Tayyip Erdoğan," it said.

Turkey will also reiterate its expectation of an equal sharing of burden and responsibility on the refugee issue during the talks, the statement added.

Turkey will co-chair the first Global Refugee Forum in Geneva on Dec. 17-18, focusing on arrangements for burden and responsibility sharing, education, jobs and livelihoods, energy and infrastructure, solutions and protection capacity.

The Global Refugee Forum convenes at the ministerial level and includes U.N. member states and other stakeholders.