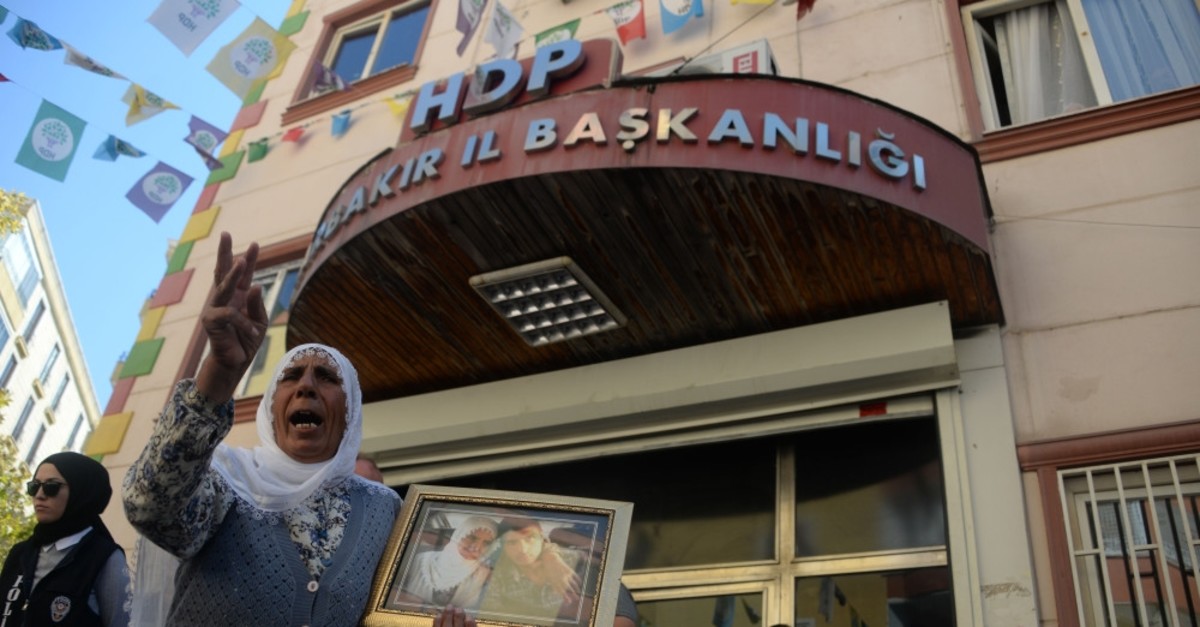 A mother protests the abduction of her son by the PKK in front of the provincial office of the Peoples' Democratic Party (HDP) in southeastern Diyarbaku0131r province, Sept. 5, 2019.
by Daily Sabah with AA Sep 06, 2019 12:18 am

Protests against the PKK by Kurdish mothers, who demand their sons back, are getting bigger as more families join them to raise their voices

The sit-in protest conducted by Kurdish mothers whose sons were abducted by the PKK terror group has intensified as more families joined the crowd in front of the provincial office of the Peoples' Democratic Party (HDP) in southeastern Diyarbakır province. Four more families joined the protest to demand their sons back. Fevziye Çetinkaya, who launched the ongoing second stage of the protests, said her 17-year-old son frequently went to the local HDP office, she vowed never to stop her protest until he was returned. Çetinkaya's protest follows closely on the heels of Hacire Akar who launched a similar sit-in on Aug. 22 near the HDP's office in Diyarbakır.

Akar's protest ended in success as her son, Mehmet, was brought back just two days later. Her determination has become a source of inspiration for others.

Other mothers who claim that their sons were also abducted by the PKK have joined the protest in the past few days.

In June 2018, a mother of a 17-year-old boy who left Turkey in 2018 to join the ranks of the PKK's Syrian offshoot, the People's Protection Units (YPG), in northern Syria called on her son to surrender to security forces.

"Take shelter in the state, it doesn't harm anyone," said the mother, identified as Ayşegül B.

"Shedding the blood of your kin is a sin, don't you know? [Turkish] soldiers are our own," she said and later joined Çetinkaya's protest for help.

Müfide Ergörmüş, a mother of six, is among those threatened by the PKK as she took a stance against the terrorist group's forced recruitment. When she asked her son why he skipped school, he said the PKK forced him to take part in riots.

The mother confronted the terror group to get back her son and her life was threatened. "I just want to save my children, I can't go anywhere without the fear of losing my children. Everyone should hear my voice," she told reporters.

Emine Kaya, who came from Mardin province to join the protest, said: "The HDP is equal to Qandil. I want my son back and will not leave here."

Şevket Altıntaş, whose son was abducted by the PKK, asked: "What kind of ideology is this? How can you make me believe this? I will not leave here until my son comes."

Although the PKK is presenting itself to the international community as a "defender" of women's rights and claims to be receiving the support of Kurdish women, the incidents that have been ongoing for years actually prove to be exactly the opposite. The current cry of Kurdish mothers demanding their children back is only the tip of the iceberg. Taking children away from their families, however, is not the beginning of a chain of brutalities committed by the PKK.

The very beginning goes back to the HDP, which is known for encouraging youth to join the terrorist organization. That is to say, the children abducted by the PKK are first radicalized by the HDP. They are used as an instrument for propaganda and are forced to work. Specialists define four stages of radicalization, the first of which is brainwashing, thereby encouraging the young to join the terrorist organization. This is followed by the processes of armament, violation and going into the mountains.

In 2011, families whose children were kidnapped by the PKK terrorist organization once again gathered for a sit-in protest in Diyarbakır to show their discontent toward HDP officials. Nongovernmental organization (NGO) representatives were also present at the protest and pointed out that abducting a child for war and conflict falls in the U.N.'s category of crimes against humanity. They blamed the HDP for being indifferent to the fact that children are being handed guns and trained for war.

The terrorist group also started implementing and adopting an urban warfare strategy in 2015 to carve out enclaves in Turkish territory while using the local population as human shields, using the experience obtained by the YPG during the civil war in Syria. In this PKK, urban warfare strategy, many children from the local population were recruited to control the streets and engage in clashes with security forces.

Aytekin Yılmaz, a former PKK member who wrote books about the terrorist group, said many journalists, human rights organizations and writers have ignored the PKK's exploitation of children for 35 years and called on them to raise their voices.

He also criticized the HDP for their indifference to the protesting mothers and said it only proves the party's dependence on the terrorist group.

Back in September 2015, the citizens of Diyarbakır got fed up with the terror group's indiscriminate attacks on civilians and child recruitment.

Beginning with a group of nine mothers, more people joined to demonstrate against the terror group. Meanwhile, people in Mardin hoisted their Turkish flags and started to chant "enough" in anti-PKK demonstrations.

"The HDP is equal to the PKK," he said during a televised interview on Feb. 3, adding that even the party administration has not denied this claim.

On Aug. 19, three HDP mayors, operating in the cities of Diyarbakır, Van and Mardin, were dismissed by the Interior Ministry for supporting terrorism. They were accused of using state funds and local administrations in favor of the terror group.

Desperate against Turkey's anti-terror campaign, the PKK started to recruit underage boys and girls, security sources told Anadolu Agency (AA) in late 2018. The PKK, then, had a total of 679 "child terrorists" under its control.

Back in 2014, the group recruited over 300 children, but thanks to the Turkish state's successful anti-terror campaign, this figure dropped to 47 by 2019.

The PKK has waged a terror campaign against Turkey since Aug. 15, 1984, when it organized its first act of terrorism in southeastern Siirt province.

However, the Turkish army's technological developments and countless operations have inflicted a heavy blow on the PKK in recent years, as thousands of its members were eliminated by airstrikes or ground operations.

Interior Minister Süleyman Soylu announced in July that there were only 600 PKK terrorists roaming the mountains in eastern Turkey and upcoming operations would further eradicate the terror group.

Apart from the military methods, Turkish security officials also use the persuasion method in which members of the terror group are convinced to lay down their weapons and yield to security forces.

A total of 408 PKK terrorists have yielded since 2017 according to the Interior Ministry's database. These former terrorists are provided with much better living standards and are fully protected by the Turkish state.

The YPG terrorist group has recruited 313 children and used schools for military purposes in Syria, U.N. Secretary-General Antonio Guterres said in a report to the U.N. Security Council.

According to the annual Children in Armed Conflict report published in June, nearly 40% of children recruited by the terrorist group were girls, with 20 of them under the age of 15.

The report found that these children had received military training and that 119 girls have fought in battles.

The U.N. report unveiled that the YPG terrorist group used 24 schools and hospitals as training grounds and 14 schools as ammunition depots in Syria.

The annual U.N. report was produced at the request of the U.N. Security Council.

In 1977 the Additional Protocols to the 1949 Geneva Conventions prohibits the military recruitment and use of children under 15.

"Children who have not attained the age of 15 years shall neither be recruited in the armed forces or groups nor allowed to take part in hostilities," reads the 1977 Additional Protocol II.