Turkey to start joint patrols with US on Sunday, defense min. says 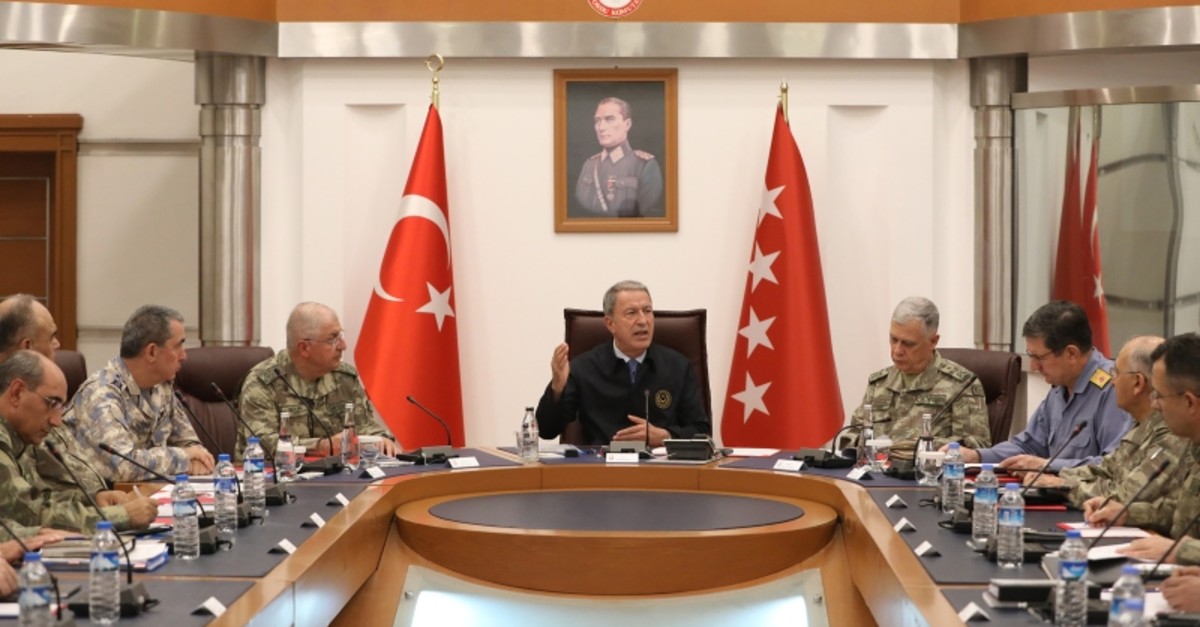 Defense Minister Hulusi Akar announced that they are planning to start joint military land patrols on Sunday by Turkish and U.S. forces in northeast Syria for the establishment of a safe zone.

Expressing that Turkey is running thin on patience with the sluggish process of establishing the safe zone, Akar said on Friday that there is a general consensus between Turkey and the U.S. on the joint patrols.

"We expect for the activities that have been determined in this respect to continue in a certain order and tempo. We desire to move on this issue," Akar said.

On Aug. 7, Turkey agreed with U.S. military officials to set up a safe zone and develop a "peace corridor" running from the Euphrates River to the Iraqi border to facilitate the return of displaced Syrians currently living in Turkey to their home country and provide security for Turkish border settlements and military outposts.

They also agreed to establish a joint operations center.

While the process for the establishment of the safe zone is taking steps forward, the U.S. is continuing logistical and training support to the PKK terrorist organization's Syrian affiliate, the People's Protection Units (YPG), making Turkey cautious in fully trusting the country.

"They [the U.S.] first started negotiations by saying that 'there is no way the Turkish military enters the region.' The negotiations continued for a few months. Then, during the negotiations in August, a general consensus was reached on a certain schedule," the defense minister explained.

Yet, Akar also underlined that Turkey has not forgotten what happened with neither Manbij or Raqqa, when the U.S. refused to clear YPG terrorists from the region.

"Since this [the Manbij deal] failed, we carried out Operation Olive Branch and Operation Euphrates Shield by ourselves. Our determination on the issue is quite clear," he added.

The U.S. has primarily partnered with the YPG in northeastern Syria in the anti-Daesh fight. Turkey strongly opposes the YPG's presence in northern Syria, which has been a major sticking point in strained Turkey-U.S. relations, stemming from Washington's military support for the YPG.

The U.S. provided military training and has given truckloads of support to the YPG, despite its NATO ally's security concerns.

To reduce tensions, Turkey and the U.S. agreed on a road map in June 2018 foreseeing the withdrawal of the YPG from Manbij and installing joint Turkish-American patrols, which began last November.

However, the process has been sluggish as the terrorist group was still present in the city despite the three-month timetable set for implementing the deal.

Akar further indicated that so far, Turkey has fulfilled all the promises that it gave.

"In a similar way, we expect our counterparts to keep their own promises," the minister said.

President Recep Tayyip Erdoğan on Wednesday said that in three weeks, on the sidelines of the U.N. General Assembly session, Turkey will make its final effort to find a compromise with the U.S. on creating a safe zone along the eastern shore of the Euphrates.

Previously, speaking on the establishment of a joint operation center in the border district of Akçakale to facilitate the safe zone process and to monitor the retrieval of weapons given to the PKK-affiliated YPG by the U.S., Akar said Turkey has a plan B and a plan C ready in case Washington backtracks on its promises.

Turkey has long signaled a possible offensive in areas held by the YPG east of the Euphrates. However, last December, the government decided to postpone the operation after U.S. President Donald Trump decided that Washington would withdraw its troops from Syria. The withdrawal decision was quickly interpreted as the U.S. intending to halt support for the YPG.