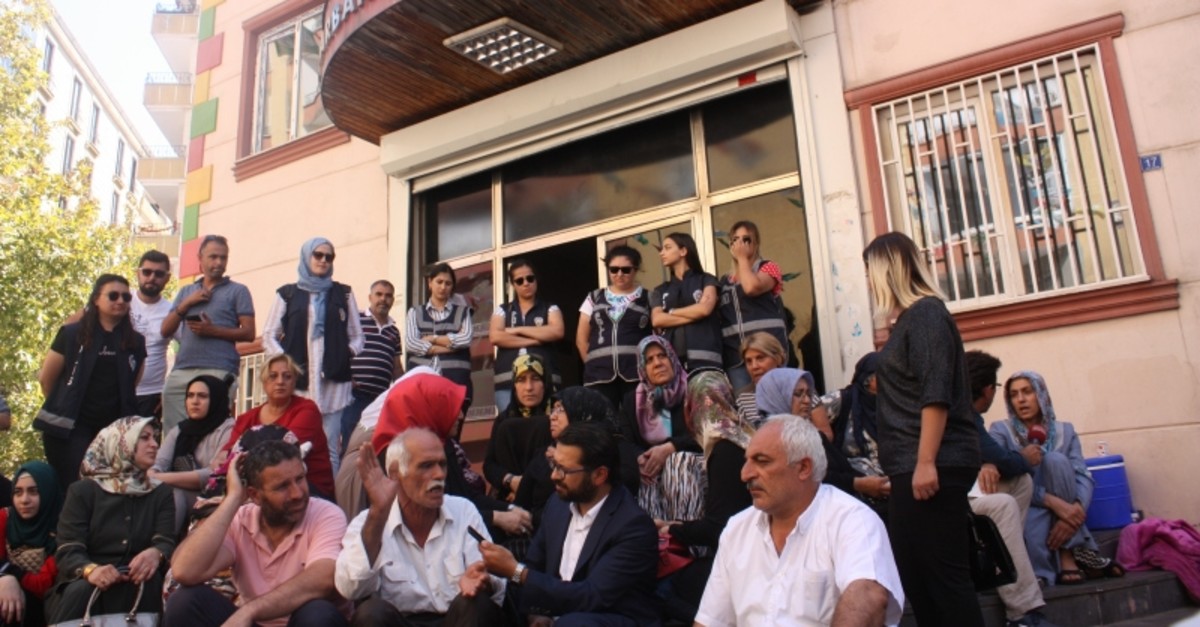 More Kurdish families have joined Hacire Akar’s protest against the PKK’s abduction of Kurdish youth. They slammed the Peoples’ Democratic Party (HDP) for assisting the terrorist group and shouted slogans in front of the party’s Diyarbakır headquarters

More families whose sons were abducted by the PKK terrorist group have been joining the sit-in protest in front of the provincial office of the Peoples' Democratic Party (HDP) in southeastern Diyarbakır province. All of them are accusing the party's leaders of sacrificing regular people's children while providing luxurious lives for their own kids. "They kidnapped my children to the mountains, while their children have a luxurious life in France," said Celil Begdaş, who asserted that his 17-year-old son Yusuf was brought to the PKK with the assistance of the HDP. Begdaş showed photos of party Co-chair Pervin Buldan's son in a luxury car in Paris.

Another photo showed Buldan's daughter sitting in a cafe in London. Previously, photos of Buldan's son, Neçirvan, showed him resting near a villa swimming pool. The HDP co-chair's daughter, Zelal, reportedly got her college education at Royal Holloway University in the U.K. capital. "I never saw France in my life; I don't even have a bicycle. I will stand here to death until they bring my son," Begdaş said. The number of families that have joined the sit-in protests has reached 10 following the example of Hacire Akar, who launched a similar sit-in on Aug. 22 near the HDP's office in Diyarbakır. Akar's protest ended in success as her son, Mehmet, was brought back just two days later. Her determination has become a source of inspiration for others. Other families who claim that their sons were also abducted by the PKK have joined the protest in the past few days.

Families also reproached Turkish artists, calling on them to support to the mothers' cause.

"If we have artists' support, we can save our children from death. Please, give us your voice," said Ayşegül Biçer, a 35-year-old mother whose son was abducted by PKK terrorists 10 months ago and who has been conducting a sit-in protest in front of the HDP's district offices.

Although the PKK presents itself to the international community as a "defender" of women's rights and claims to receive the support of Kurdish women, the incidents that have been ongoing for years actually prove the exact opposite. The current protests by Kurdish mothers demanding their children back is only the tip of the iceberg. Taking children away from their families, however, is not the beginning of the chain of brutalities committed by the PKK.

The very beginning goes back to the HDP, which is known for encouraging youth to join the terrorist organization. That is to say, children abducted by the PKK are first radicalized by the HDP. They are used as an instrument for propaganda and are forced to work. Specialists define four stages of radicalization, the first of which is brainwashing, thereby encouraging the young to join the terrorist organization. This is followed by the processes of armament, violation and finally going into the mountains.

In 2011, families whose children were kidnapped by the PKK terrorist organization once again gathered for a sit-in protest in Diyarbakır to show their discontent with HDP officials. Nongovernmental organization (NGO) representatives were also present at the protest and pointed out that abducting a child for war or conflict falls into the U.N.'s category of crimes against humanity. They blamed the HDP for being indifferent to the fact that children are being handed guns and trained for war.

The terrorist group also started implementing and adopting an urban warfare strategy in 2015 to carve out enclaves in Turkish territory while using the local population as human shields, using the experience obtained by the People's Protection Units (YPG) during the civil war in Syria. With this urban warfare strategy, many children from the local population were recruited to control the streets and engage in clashes with security forces.