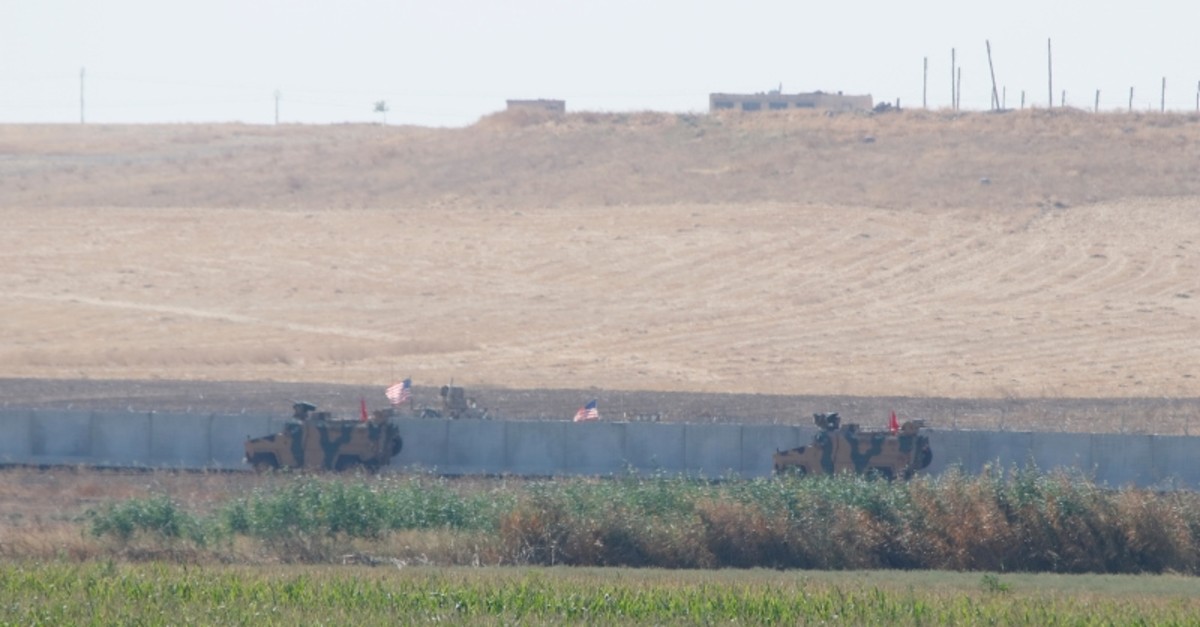 Turkey and U.S. military personnel completed the first joint ground patrol as planned to establish a safe zone east of the Euphrates in Syria on Sunday, a milestone move to clear terrorist elements and enable peace in the region.

The first joint ground patrol consisted of two phases, organization and operation. The patrols were the first phase of the safe zone plan. After organizing the patrol plan, the forces headed to Tal Abyad, Syria, located some 25 kilometers (15.5 miles) west for the second phase.

Following observations, the joint convoy proceeded south. The patrol started at around 10 a.m. local time and was completed after three hours. The patrol was supported by unmanned aerial vehicles (UAVs) and helicopters.

On Aug. 7, Turkey agreed with U.S. military officials to set up a safe zone and develop a "peace corridor" running from the Euphrates River to the Iraqi border to facilitate the return of displaced Syrians currently living in Turkey to their home country and provide security for Turkish border settlements and military outposts. They also agreed to establish a joint operations center.

However, while the process for the safe zone has been launched, the U.S. still continues logistical and training support to the PKK's Syrian affiliate, the People's Protection Units (YPG), a terrorist group that poses a major security threat for the country. This suspicious attitude of its NATO ally, however, makes Turkey cautious to put its trust in the country when it comes to establishing a safe zone, forcing it to consider alternative plans.

Speaking in eastern province of Malatya, President Recep Tayyip Erdoğan warned Saturday the U.S. to end its indecisive policy regarding the safe zone. "While Turkey is determined to remove the terrorist group, they are making plans to straddle both us and them. It seems that they are willing to establish a safe zone for the terrorist group," Erdoğan said.

"If the safe zone in the east of Euphrates with our own soldiers will not be established by the end of September, we will have no choice but to go its own way," the president warned.

"This is not something to be completed by three or five helicopter flights, five or ten vehicle patrols, the presence of a couple of soldiers in the region only for show. We must bring the whole region with its cities and rural areas to a safe status to settle one million people there," Erdoğan said.

Last week, Erdoğan said that in three weeks, on the sidelines of the U.N. General Assembly session, Turkey would make its final effort to find a compromise with the U.S. on creating a safe zone along the eastern shore of the Euphrates.

Previously, speaking on the establishment of a joint operation center in the border district of Akçakale to facilitate the safe zone process and to monitor the retrieval of weapons given to the YPG by the U.S., Defense Minister Hulusi Akar said that Turkey has a plan B and a plan C ready in case Washington backtracks on its promises.

Turkey's suspicions over the U.S. are not only the result of the country's ongoing support to the YPG but also prior experiences in other deals that caused major disappointment. Before the safe zone deal, Turkey and the U.S. agreed on a road map in June 2018 foreseeing the withdrawal of the YPG from Manbij and installing joint Turkish-American patrols, which began last November. However, the process has been sluggish as the terrorist group was still present in the city despite the three-month timetable set to implement the deal.

While testing the trustworthiness of the U.S. toward Turkey, the joint patrols are also significant for enabling Turkish forces to enter east of the Euphrates, a region that the country has long have been eyeing on to clear of terrorists and ensure its national security. Turkey has long signaled a possible offensive in areas held by the YPG east of the Euphrates. However, last December the government decided to postpone the operation after U.S. President Donald Trump decided that Washington would withdraw its troops from Syria. The withdrawal decision was quickly interpreted as the U.S. intending to halt support for the YPG.

Since 2016, Turkey has conducted two major military operations in northwestern Syria, Operations Euphrates Shield and Olive Branch, to purge the region of terrorist groups, most notably the YPG. As a result of the operations, hundreds of thousands of refugees have been able to return to the liberated areas.