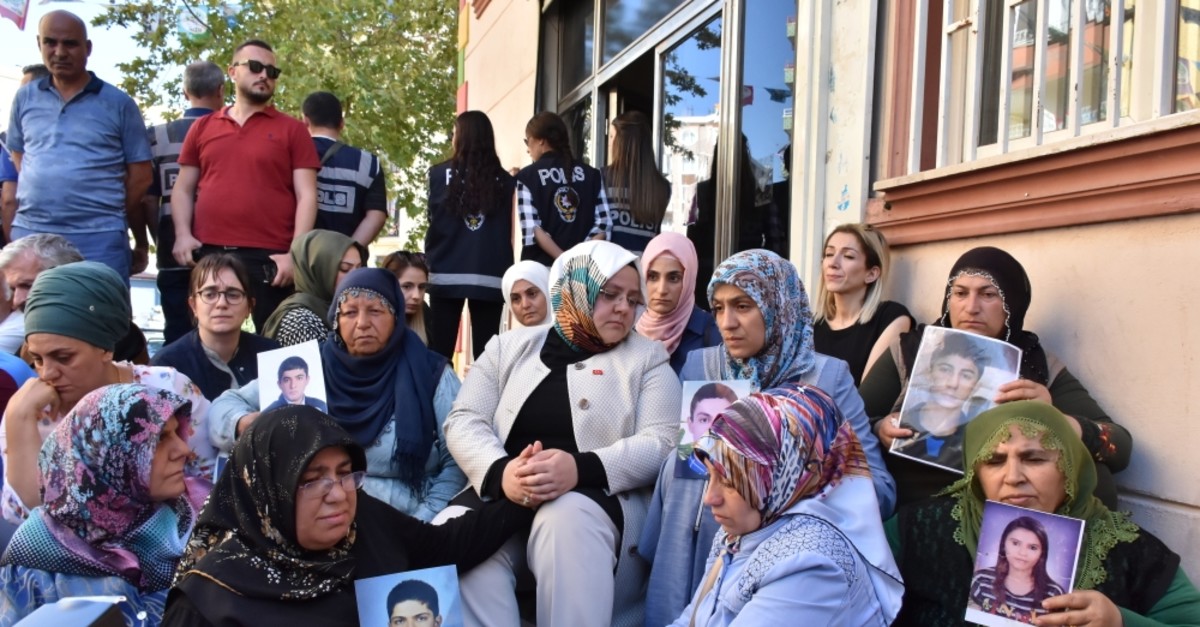 Hoping to save their children from the grasp of the PKK terrorist organization, two more families joined the sit-in protests that started with a single Kurdish mother who sat in front of the Peoples' Democratic Party (HDP) building and demanded her son be brought back

Protests against the PKK terrorist organization by Kurdish mothers have gained momentum as two more families joined the cause, calling for the release of their children. Currently, 18 families are staging a sit-in protest in front of the pro-PKK Peoples' Democratic Party (HDP) headquarters in southeastern Diyarbakır province. Saliha Edizer and Süleyman Aydın are the most recent additions to the group of families who have been protesting the terrorist group for almost two weeks now. Edizer is looking for her son, Yakup, who is believed to have been kidnapped by the PKK five years ago when he was only 14. Aydın, on the other hand, participated in the protests for his 19-year-old son, Özkan, who was abducted four years ago.

Hacire Akar, whose son was abducted by the PKK terrorist group, started a sit-in protest two weeks ago. Her protests are followed by more families suffering from a similar case.

Many other families from various other provinces of the country have also joined the struggle against the terrorist group's brutality.

Expressing that footage of her son Yakup alongside PKK terrorists proved that he was abducted, Edizer said that she believes the HDP sent his son to the terrorist group.

"A boy who does not even leave the house disappeared suddenly," Edizer, who came from Istanbul to join the protests, underlined.

"He talked with one of his friends, who told him to go to [Istanbul's] Kağıthane district and wait for him there. That boy was a student as well. I suspect that he has something to do with this," she said.

Saying that she has been crying day and night for her son, Edizer said that her son needs her and she needs him.

PROTESTS TO CONTINUE UNTIL CHİLDREN COMES BACK

"I've never received any news, except for footage that a relative of mine saw on TV. Otherwise, I didn't know [that he was with the PKK]," Edizer said. "We will continue to protest until our children come back."

Because the party has previously acknowledged being involved in encouraging the youth to join the PKK, the families' attentions, looking for their missing children, automatically turned toward the HDP.

Currently, the party rejects any claims against them. However, some families are sure that their children are in the hands of the PKK, as the terrorist groups sent voice records, while others have a strong suspicion despite lacking concrete evidence. Many families also expressed that there are many more families suffering from similar situations but are afraid to come out.

Aydın, on the other hand, said that his son Özkan was abducted during the resolution process.

"My son got lost back in 2015. I came home one day and saw that Özkan was not there. We asked around and learned that the children were taken to the mountains [by the PKK]. I went to the police forces who told me that my son was probably taken to Lice [district]. Then, I got on to a bus and went to Lice to talk with the terrorists," Aydın said, adding that he learned that his son was really there.

"I had to return home after a while," Aydın said, adding that he informed the police about the developments later on.

"His mother is sick, can't stand up. My father died because of the sorrow of his grandson. We're miserable, we want our son back," Aydın further said, underlining that he is ready to give up his life to get his home. The current protests by Kurdish mothers demanding the return of their children is only the tip of the iceberg. Taking children away from their families is only one of brutal acts committed by the PKK.

The very beginning can be traced back to the HDP, which is known to encourage young people to join the terrorist organization. Children abducted by the PKK are first radicalized by the HDP. They are used as an instrument for propaganda and are forced to work. Specialists define four stages of radicalization; the first is brainwashing, thereby encouraging the young to join the terrorist organization. This is followed by the processes of armament and violation before finally getting sent off to the mountains. In 2011, a similar event took place when families whose children were kidnapped by the PKK terrorist organization gathered for a sit-in protest in Diyarbakır to show their discontent toward HDP officials.

Turkish politicians have also showed support for the families, saying that anyone who claims to defend human rights must back the cause of the Kurdish mothers.

Family and Social Policies Minister Zehra Zümrüt Selçuk visited the families yesterday, showing support for the protests. Greeted with applause from the families, Selçuk received information on the cases by talking with each family individually.

"Today, we are here in Diyarbakır to support our families and mothers who are staging a brave fight to save their most valuable belongings, their children, from the terrorist group," Selçuk said following her visit, calling on nongovernmental organizations, artists, academics and the media not to abandon the mothers. "The mothers here, by saying 'we have no children to give to you' are pursuing a legendary resistance. We believe that, as President Recep Tayyip Erdoğan also said, this resistance by the mothers will force the PKK to kneel down," she said during a joint press conference with the mayor of Diyarbakır, underlining that during her visit she became sure that the mothers will win. "History will record the people who supported the mothers as well as the ones who remained silent," she further stated.

President Recep Tayyip Erdoğan voiced his support on Sunday for the mothers during a meeting with students in eastern Turkey's Malatya province. He said the government is doing its best to eliminate the terrorists.