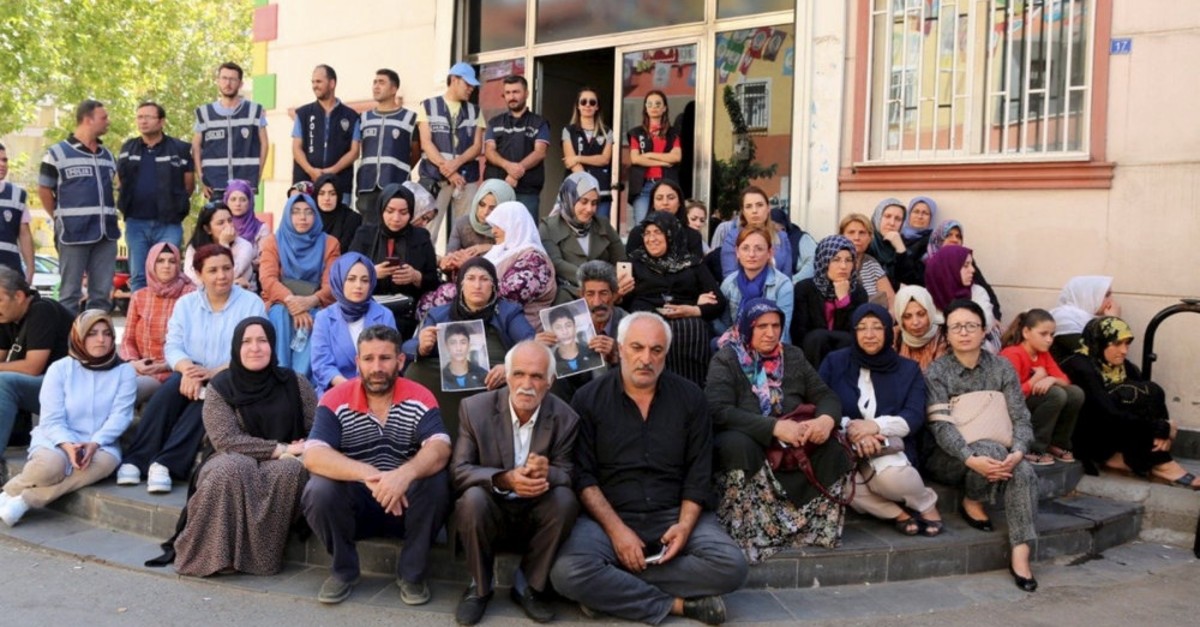 Western media insist on overlooking Kurdish mothers crying for their children, abducted by the PKK, despite claiming that they recognize it as a terrorist group

Why are the victims of terrorism in Turkey or any other country who are not classified as a part of the Western community not the subject of news in Western media? This question is extensively being raised by journalists themselves around the world.

PKK terrorism is targeting Turkey today, and countries that see its affiliates in Syria consider it only news if terrorism tends toward them. Indeed, this is nothing new; however, it is noteworthy that news of the mothers whose children were abducted during recent weeks by the PKK does not appear in Western media.

It's been three weeks since mothers whose children were abducted by the PKK started protesting in front of the pro-PKK Peoples' Democratic Party (HDP) provincial building; the number of families participating has surpassed 20.

One of the most significant reasons why the protests that caused a huge wave spreading throughout the country have been much more influential than those before is that the media has given the families that are victim of terrorism more support.

This time, the weak cries of the mothers caught the attention of millions, and every day another family joins the protests.

On the other hand, even though this event is widely seen in Turkish media, we do not come upon the stories of the mothers and fathers that fell victim to terrorism in the international press.

Although the PKK and its affiliates were declared terrorist organizations by Western countries on paper, we can still encounter thousands of news articles with the narrative "Kurdish independence fighters" in Western media, glorifying the terrorist group. In fact there are no examples that highlight the PKK's killing of civilians and abducting underage kids.

Here we face the question of which of the terrorism victims can find a place in Western media, if they manage to have a place at all.

Particularly when we take the opinion of media representatives of countries where terrorism is one of the biggest social and security problems, we unfortunately face the truth that "unless having been the target of terrorism, other countries and media hand the microphone to those victims."

If we look at the examples of Colombia, Pakistan, Nigeria and Indonesia in this regard, we see that victims of terrorism in these countries face the indifference of Western media just as in Turkey.

Hamza Idris, a journalist from Nigeria working as the political editor of Daily Trust, says in Nigeria for instance, the Boko Haram crisis has been with the country for over a decade — it started in 2009 — and there is no end in sight.

The crisis has displaced over two million people along the shores of Lake Chad, said Idris. "Sadly, the plight of this people is not being reported the way it should be by both local and international media. We now have over 51,000 widows, whose husbands were killed in the crisis. We also have 52,000 orphans who lost one of their parents or both" he said.

Besides the local media's limitations and the need for a response, Idris emphasizes the fact that the international media, on the other hand, only gives attention to stories where they have special interest, such as new attacks on the military and civilian population.

"In Nigeria, we have already lost a generation of youth because the Boko Haram crisis has killed over 100,000 people. Similarly, orphans have little opportunities of going to school; it is really a humanitarian catastrophe but the world is not aware of this because media coverage is not enough" Idris continued.

Muhammad Zarrar Khuhro from Pakistan, a presenter for National Dawn News, also points out the same reality. He says there is more or less interest of the Western media covering the victims of terror in other countries.

Khuhro underscores that there is a Western narrative that fits their interests when the terror matters on the media.

"By definition, Western media covers their viewership's interest. A terrorist group that targets the West will naturally get coverage. Since the PKK targets only Turkey, perhaps its attacks are not newsworthy enough for Western media.

Especially when the current narrative continues to dominate the media, which is that they are secular Kurdish fighters who fight against Daesh and Bashar Assad. So they don't consider the PKK like Daesh. They think that they don't have a religious package. In Western media the terrorist has to be Muslim... Realistically, as long as the PKK does not target Western interests, the victims of the PKK will not get coverage and will not make headlines. It is the same with the victims of the Taliban who also don't get coverage in international media. If you look at the Pakistan example there is also little reporting on victims of terror attacks in Western media," Khuhro continued.

Colombian journalist Maria Paulina Baena Jaramillo from the newspaper El Espectator also says that victims of terror in her country are not in the media spotlight.

"The victims of ongoing violence try to make their voice be heard out-loud through justice and media, but they are still underrepresented. On the other hand, it is very risky for the families because they consider their security and lives. The mothers of the children whose children were killed by the rebels unified in an organization to request justice. However, justice is still not there. These victims feel that their daughters and son will not come back. They want the perpetrator of these crimes to be held accountable. We try to give them a voice but it is not enough for justice," she said.

Ratna Ariyanti, a journalist from Indonesia, agrees with other journalists whose countries face terrorism.

"Media should pay more attention to victims instead of giving space to the perpetrators. In much terrorism coverage, including in New Zealand where there was media that portrayed the perpetrator as an 'angelic boy whose former associates revealed was a likable and dedicated personal trainer running free athletic programs for kids.' The description was being used because the perpetrator is a white man," she said.

Victims who died in that incident were not really getting much coverage, Ariyanti said.

"Victims with a minority background, like Muslims, women, indigenous groups, do not get attention from the media," she added.

"This phenomenon needs to change. Media should take the side of the victims," she concluded.

As can be seen, unless the narrative of terrorist organizations changes in all countries and interests are left aside, unless the fact that terrorism has no religion, race, political leaning or ethnicity is accepted, it seems that the silence predominating terrorism victims in Western media will persist until interests are not taken into account.