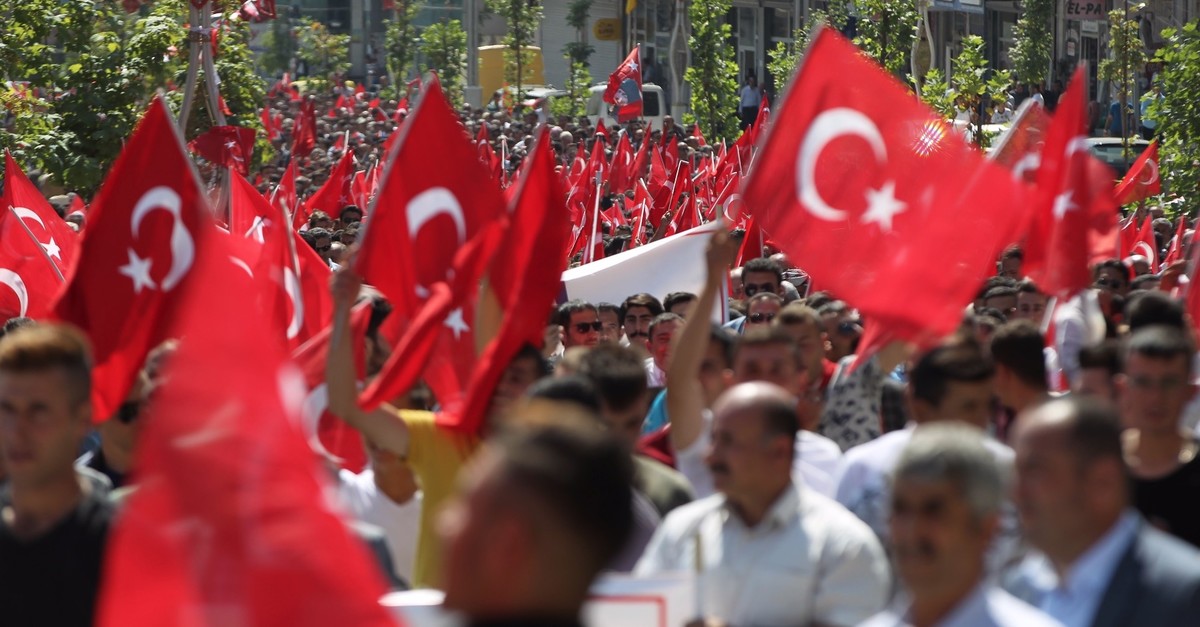 Thousands of people march against the PKK, protesting its brutalities in the southeastern Hakkari province, Sept. 14, 2019.
by Daily Sabah Sep 16, 2019 12:06 am

Thousands of citizens took to the streets throughout eastern Turkey on Saturday, including politicians, local authorities and nongovernmental organizations, in response to recent attacks perpetrated by the PKK terrorist organization and to show support for the ongoing sit-in protests by families whose children were abducted by the group.

Rallies took place in the eastern and southeastern cities of Ağrı, Batman, Bingöl, Bitlis, Elazığ, Hakkari, Mardin, Muş, Siirt, Şanlıurfa, Şırnak, Tunceli and Van as well as in various district centers in the same provinces. In Bingöl province, a rally was organized by the Bingöl Martyrs and Veterans Family and Human Rights Association (BİŞHAK). Participants carrying Turkish flags gathered in front of the clock tower in the Yenişehir neighborhood and marched toward July 15 Direniş Square. Protesters unfurled a 209-meter-long Turkish flag during the march. In the rally in Elazığ province, people also condemned terrorist attacks targeting security forces and civilians. They marched chanting slogans against terrorism.

Last Thursday, seven people were killed and 10 others were injured in the Kulp district of southeastern Diyarbakır province when PKK terrorists detonated a roadside bomb, while a pickup truck carrying forestry workers was passing by. The district mayor and another official from the pro-PKK Peoples' Democratic Party (HDP) as well as the party's district chairman were detained as part of an investigation into the attack. The HDP, long facing public backlash and judicial probes over its ties to the PKK, is also under pressure over a growing civilian protest movement launched by local families.

A sit-in launched in front of the party's Diyarbakır provincial headquarters by mothers whose children were kidnapped by the terrorist group has entered its 13th day with the number of families reaching 33. The party is being accused of aiding the PKK in recruiting new militants through its provincial and district organization as well as municipalities.

In the eastern province of Van, 51 nongovernmental organizations participated in the rally that saw thousands carrying Turkish flags and chanting anti-PKK slogans walking through the city center.

A protest to support families that are victims of terrorism took place in Mardin on Friday. Speaking in the name of the citizens rallying against terrorism, İbrahim Ertakgöz said, "As citizens of Mardin we would like to state that are against all formations with bad intentions. We support those who have been protesting the PKK's political affiliate in Diyarbakır for days."

Meanwhile, the families that started a sit-in to protest the HDP filed a criminal complaint against the party for abducting their children and being threatened. 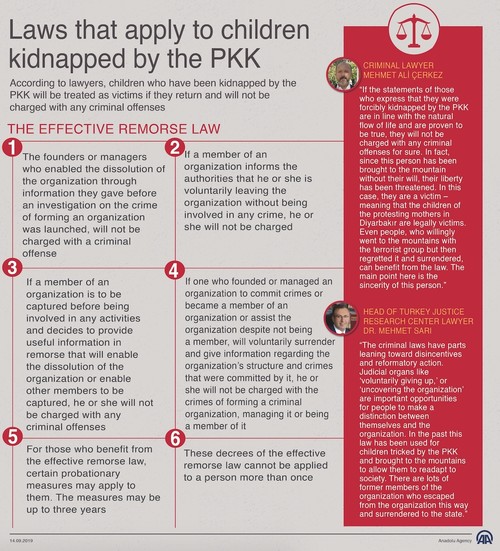 Some 33 families, claiming that the HDP is responsible for abducting their children and sending them to them to the mountains to be trained by PKK terrorists, are taking part in the protest in front of the party's southeastern Diyarbakır provincial building .

On the 13th day of the protests, Mehmet Emin Coşkun, the latest member joining the sit-in, said that he hoped to rejoin his son. Explaining that he has not heard from his son for a long time, he said traveled from Erzurum to Diyarbakır to learn about his fate.

One of the fathers, Süleyman Aydın, who joined the protests for his son who was abducted four years ago at the age of 15, said, "As mothers and fathers, we filed a complaint to the public prosecution office." He added that party members harassed the families verbally during the sit-in. "We all voted for you, however you answered by abducting our children. Nearly 3,500 children were taken from the Sur district," he continued, while calling on all families to come for support.

Another family member who recently joined the demonstrations said, "The PKK and the HDP are the same. One is on the mountains, while the other one is here."

Protesting for his nephew, Muhittin Avunan came from eastern Elazığ province and said he is determined not to leave until he is found.

The protesting families have complained about the HDP party's leaders "sacrificing regular people's children while providing luxurious lives for their own kids."

"The children of Selahattin Demirtaş and HDP leaders are studying at higher education facilities, traveling abroad while those of the poor are killed on the mountains," said Fadıl Kılıç, a father who came for his son who was a university student when he was abducted in 2016.

After Hacire Akar took the first step by showing courage and raising her voice against the terrorists on Aug. 22, her son Mehmet Akar rejoined her on the fourth day. While rescuing her son, she revealed the HDP's link with the PKK, which became an inspiration for other families in the same situation. A common theme among most families was that their children were visiting HDP headquarters, while some say their children were last seen entering the building.

Many families also indicated that there are many more families suffering from similar situations but are afraid to come forward.

Meanwhile, an investigation of HDP Diyarbakır deputy Leyla Güven was launched on Saturday for supporting the PKK terrorist group.

"As long as the Kurdish problem remains unresolved, there will be more conflict, war and participation as guerillas," she said last week, in reference to the children who were recruited by the PKK.