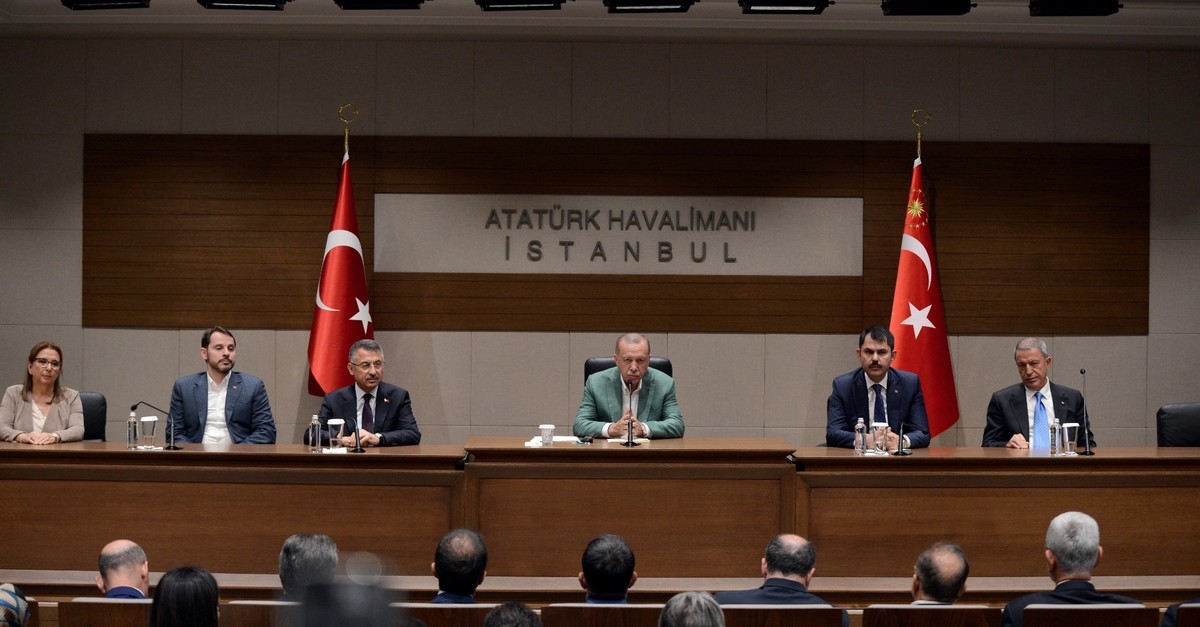 Before his departure to New York for the U.N. General Assembly, President Erdoğan reiterated Turkey's determination to implement the safe zone plan while also drawing attention to the U.S.' continuing support to the YPG

All preparations along the border to establish the planned safe zone have been completed, but Turkey cannot afford to ignore U.S. support to the PKK terror group's Syrian affiliate, the People's Protection Units (YPG), said President Recep Tayyip Erdoğan on Saturday before he departed for New York to attend the U.N. General Assembly.

President Erdoğan said he would address international peace and security on the first day of talks on Sept. 24, as he spoke to the press before he departed for the United States. Erdoğan also touched on issues that he would discuss with U.S. President Donald Trump on the sidelines of the assembly. Syria and the U.S.' continued support for terrorist groups were the main concerns Erdoğan addressed.

"We have completed all of our preparations along the border. We are together with the U.S. in NATO, and we have continued our strategic partnership for many years," Erdoğan said about the establishment of a safe zone east of the Euphrates River in northern Syria and added: "But in a place where the United States is not invited, we cannot afford to ignore the support it has given to terrorist organizations. In other words, their support for terrorist organizations such as the PKK and its affiliate the People's Protection Units (YPG) is obvious."

The 74th session of the General Assembly will be held in the U.S. on Sept. 21-25. It is expected that around 150 heads of state will attend the assembly. The president also announced Ambassador Volkan Bozkır's nomination for the 75th U.N. General Assembly presidency till September 2021. Calling the Syrian Democratic Forces (SDF), a YPG-led group, an umbrella organization for the PKK, Erdoğan said he would discuss this with Trump as well as the withdrawal of U.S. troops from Syria, which has not yet been realized.

The U.S currently has nearly 1,000 troops in Syria, mostly working with the SDF and YPG, purportedly for its fight against Daesh.

Erdoğan stressed that Turkey will clear all terrorist organizations from the area with the establishment of the safe zone.

His comments came after Turkish and U.S. armed forces conducted the sixth round of joint helicopter flights on Saturday for a planned safe zone east of the Euphrates River in northern Syria.

According to Anadolu Agency (AA) correspondents on the ground, two Turkish and two American helicopters took off from Şanlıurfa, southeastern Turkey, where the two countries' armed forces have a joint operations center. They flew to the Syrian side of the border.

According to Turkey's National Defense Ministry, the joint patrols were conducted as part of an agreement over the planned establishment of a safe zone in northern Syria.

The agreement also envisaged setting up necessary security measures to address Turkey's security concerns, including clearing the zone of the terrorist YPG, a group the U.S. has sometimes been allied with, over Turkey's objections.

The YPG is the Syrian offshoot of the PKK terror group, which for more than 30 years has been responsible for the deaths of nearly 40,000 people in Turkey, including many children, women and infants.