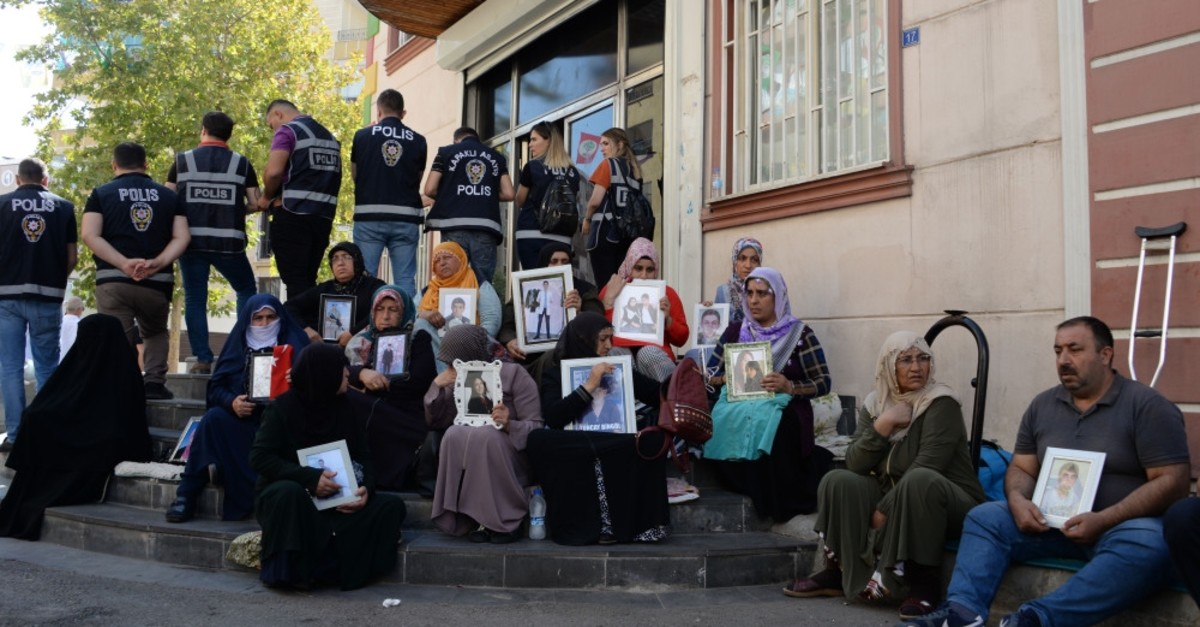 The People's Democratic Party (HDP) has threatened the Kurdish mothers, demanding the return of their children from the PKK, hoping to provoke them. Yet the mothers are determined to continue their peaceful protest until they find their children

The latest threat came from HDP supporters who said to the protesting mothers: "Our patience has reached its limits. Our youth will do what is necessary to do," while entering the headquarters, implying that the mothers would be "taken care of."

This verbal attack led the peacefully protesting mothers, who have lost their children to the PKK terrorist group, to attempt to follow the HDP supporters inside the building. Tensions were reduced after the police came to calm the mothers. Nonetheless, a mother became ill due to the incident and was hospitalized.

Reacting to the HDP supporters, the mothers underlined that they will continue th

eir movement until they find their children. Ayşegül Biçer, one of the mothers, said that they are not afraid of either the HDP or the PKK, which is why they are staging a sit-in protest.

"We want our children back. Since we want our children, they want to make us look like we are the ones who are criminals. They insult us. They do not have a sense of shame," Biçer said, saying that she is ready to give her life if necessary. "Even if I fail to bring my child back, I would set an example for thousands of young people. We will not leave here without finishing the PKK," she added.

e they launched the sit-in protest, and since then, HDP supporters often try to stir up trouble.

"We have been here for 25 days. Why don't they do what ‘they have to do?'" If they have the power to remove us, why don't they remove us? We want our children back, which is our natural right. We do not want their building, properties, salaries, children. We want our children," he said, adding that if they support the PKK, they can send their own children to the mountains. "My child should come back and serve his own country," Biçer said, speaking of his 16-year-old son. He asserted that there is no support left in Turkey for the terrorist group.

The HDP, long facing public reaction and judicial probes over its ties to the PKK, is under pressure due to this growing civilian protest movement launched by mothers and local families.

The sit-in has been ongoing since Sept. 3 with the number of families reaching 51, including five Iranian families whose children were abducted by the PKK's Iranian wing, the Kurdistan Free Life Party (PJAK).

Meanwhile, on Friday, another mother joined the sit-in protest. Immihan Nilifirka traveled from Istanbul to join the sit-in protest, which is growing every day. She claimed her son was kidnapped by the PKK four years ago in Istanbul.

Nilifirka said her son went out after having his meal at home on March 21, 2015, and never came back. Mehmet was 22 when he disappeared.

"[...] He had two months to graduate [from Ege University in Izmir]. There has been no news since then. We went everywhere. I came here to support other mothers and to get my son back hopefully," said the grieving mother.

Initially, a lone protest was started by mother Hacire Akar in front of the HDP provincial office in Diyarbakır last month. Akar wanted to see the return of her 21-year-old son, Mehmet Akar, who had been missing for three days after he was abducted by the PKK terrorist group. Following her sit-in, and with the help of security forces in Diyarbakır, Akar was finally reunited with her son.

Another mother, Mevlüde Üçdağ also said that they have no (more) strength to stand, while a father, Süleyman Aydın, said that they will not give up due to the HDP's provocations.

"They attack us, insult us, sniping through windows and spitting. They make a comment whenever they walk around us. These are provocations," he said.

They kidnap children, Aydın said, adding that their claim that they support Kurdish rights is nothing but a lie.

Families accuse the party's leaders of sacrificing regular people's children, while providing luxurious lives for their own kids, showing photos of party Co-chair Pervin Buldan's son in a luxury car in Paris. Another photo showed Buldan's daughter sitting in a cafe in London. Previously, photos of Buldan's son, Neçirvan, showed him resting near a villa swimming pool.