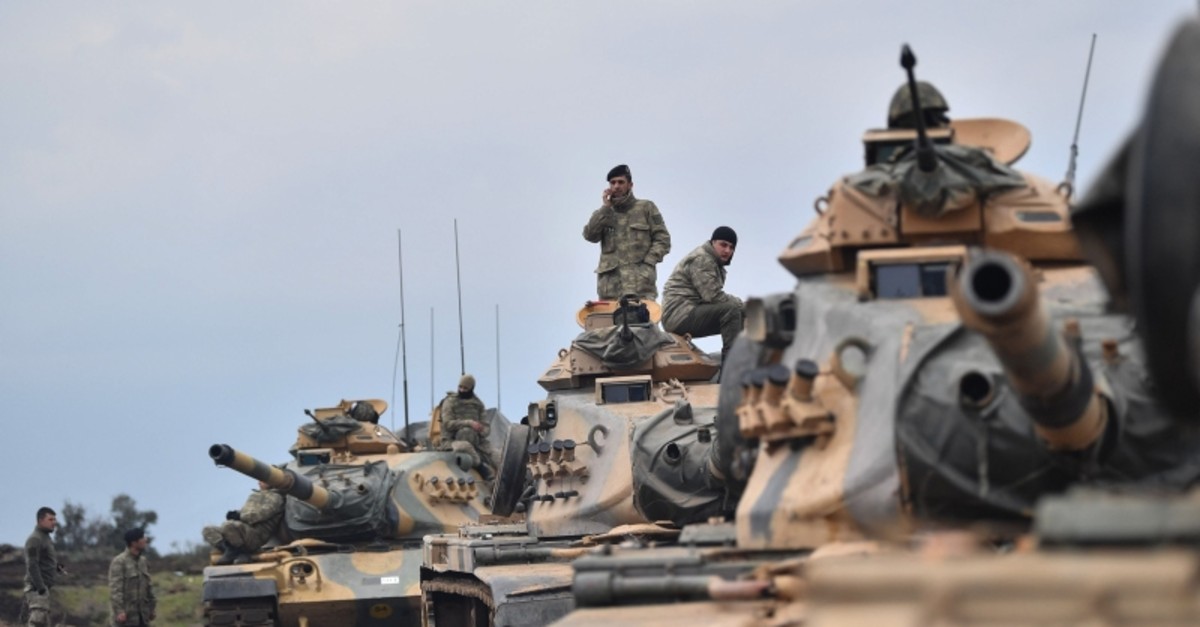 Turkish army soldiers gather with tanks as they wait near the Syrian border before entering neighbouring Syria on January 21, 2018 at Hassa, in Hatay province. (AFP File Photo)
by Daily Sabah Oct 07, 2019 10:29 pm

According to the sources, Turkish artillery shelled positions of the People's Protection Units (YPG) in the countryside of the border town of Malikiyah between Turkey and Syria in the north of Hasakah.

The move comes hours after the Turkish Presidency submitted a motion to Parliament to extend the state's authority to launch cross-border military operations in northern Iraq and Syria for one more year.

The motion, submitted by President Recep Tayyip Erdoğan's government, had previously allowed the Turkish military to carry out cross-border operations from Oct. 30, 2018 until Oct. 30, 2019.

Washington paved the way for the long-planned Turkish operation into the area east of Euphrates against the YPG terror group after the White House said Sunday the U.S. military would be withdrawing from northern Syria.

The statement followed a phone call between Erdoğan and his U.S. counterpart Donald Trump, during which a November meeting was planned, according to Turkish presidential sources.

President Erdoğan confirmed Monday that U.S. troop withdrawal from northern Syria had begun, and the operation against the YPG was imminent before his departure to Serbia.

Since 2016, Turkey has conducted two major military operations in northwestern Syria – Operations Euphrates Shield and Olive Branch – to purge the region of terrorist groups Daesh and the YPG, which is the Syrian branch of the PKK terrorist organization.