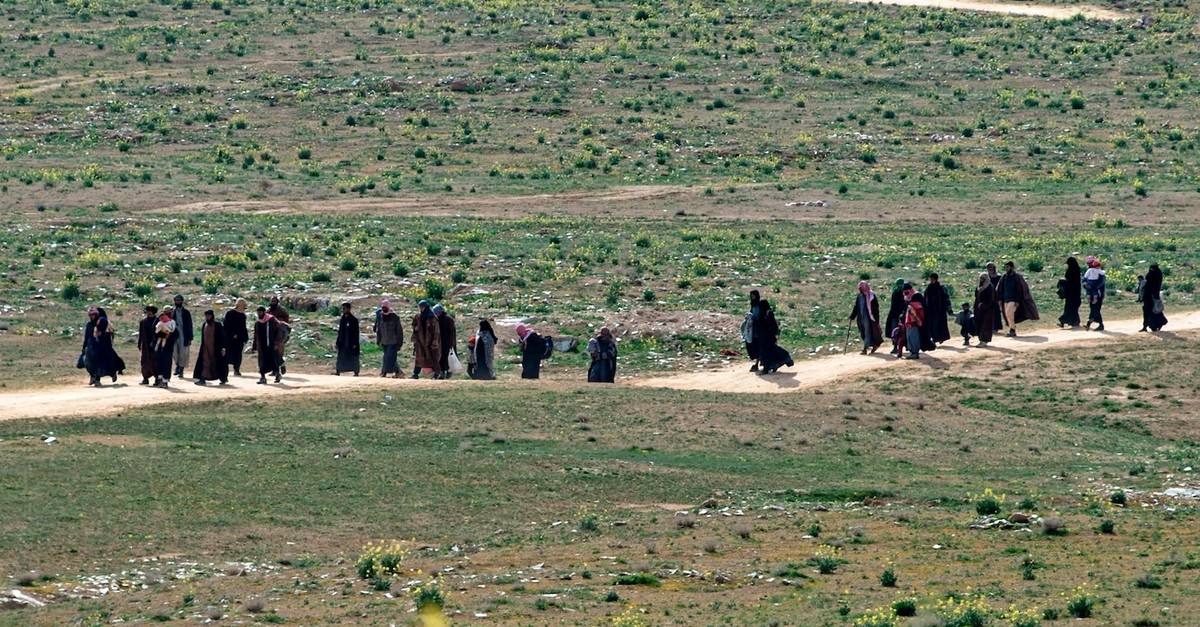 Turkey tries to find a solution to the crisis caused by former Daesh terrorists currently in prisons in Syria as U.S. troops leave the region

Turkey has rolled up its sleeves to come up with a solution on what to do with former Daesh terrorists currently held in prisons in Syria, President Recep Tayyip Erdoğan said Monday.

Underlining that there are many European states who do not know what to do with citizens who joined the terrorist group that has been defeated for the most part, Erdoğan said that Turkey has been working on the issue, trying to find a way to bring in the former Daesh terrorists from the prisons they are being held in.

Regarding the claims about 10,000 Daesh terrorists in the area, Erdoğan said the number is "exaggerated" by the media.

"The number of Daesh prisoners has been a bit exaggerated. The U.S. is working to decide how to handle them," he said.

At the height of Daesh's power, hundreds of foreign fighters including Turks streamed in to join the self-proclaimed caliphate. Some militants took their young children with them to Daesh-controlled areas in Syria and Iraq. Following a period of expansion from 2014 to 2015, Daesh went into a gradual decline, with U.S.-led coalition bombings weakening the group. The international community has been fighting against Daesh for years, but this bloody group remained undefeated with its militias.

Previously on Sunday, Presidential Spokesperson İbrahim Kalın said that Turkey would not allow Daesh to return in any shape or form.

"The U.S. Armed Forces will not support or be involved in the operation, and the U.S. forces, having defeated the ISIS [Daesh] territorial 'Caliphate,' will no longer be in the immediate area," the U.S. said early yesterday, referring to Turkey's long-planned operation in the region.

The U.S. statement added, "Turkey will now be responsible for all ISIS fighters in the area captured over the past two years in the wake of the defeat of the territorial 'Caliphate' by the United States."

The U.S. also accused France, Germany and other European nations of dragging their feet in failing to take back captured Daesh terrorists.

Following the U.S. statement, the Syrian Democratic Forces (SDF), an umbrella organization dominated by the People's Protection Units (YPG), said in a statement that the U.S. withdrawal will "negatively" affect the fight against Daesh, trying to spread terror over the issue.

Although Daesh has mostly been defeated, dealing with the children of foreign fighters in Syria and Iraq is posing a dilemma for governments in their home countries. Many of the foreign fighters and their families are in prison or special camps in Iraq and Syria.

Additionally, more than 3,000 foreign women and children are being held by the YPG at the al-Hol camp in northeastern Syria.

Ankara-Washington relations quickly became strained over the latter's support for the terrorist organization as Turkey argued that using one terrorist group to fight another is illogical. Turkey sees the YPG as an extension of the PKK, which has claimed the lives of more than 40,000 people in a 30-year terror campaign. The U.S., however, while listing the PKK as a terrorist group, opted to continue its militarily support for the terrorist organization, by providing truckloads of military supplies and military training under the pretext of fighting Daesh despite the warnings of its NATO ally.