Turkey has valid grievances about US, experts say 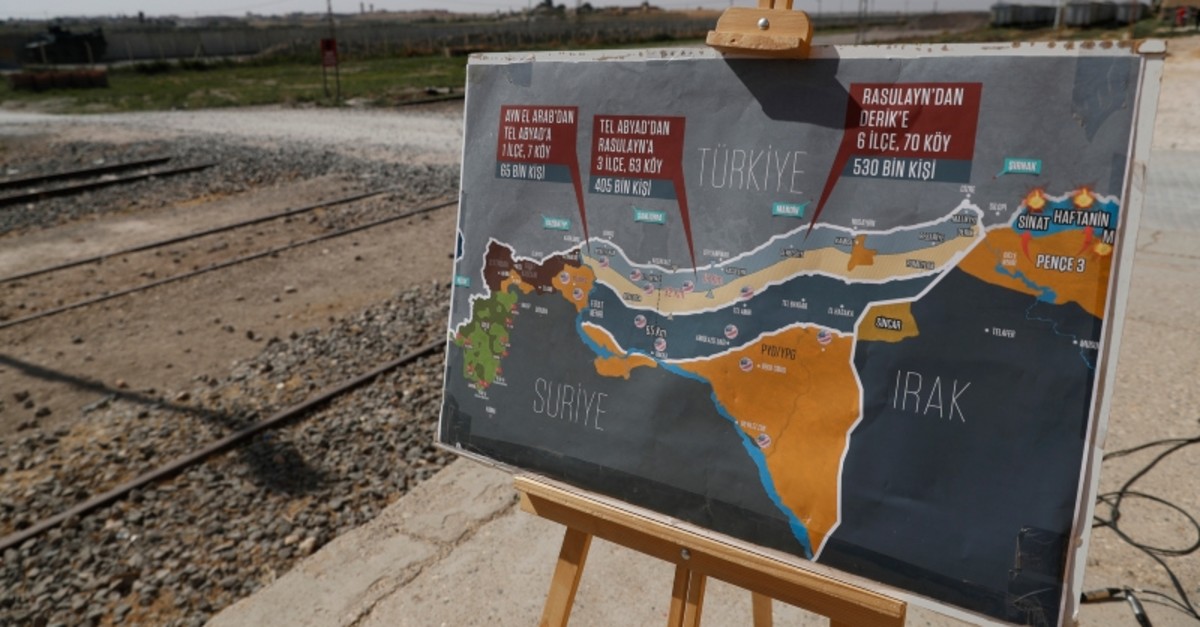 A map showing Turkey's suggested possible operation in Syria, used by a TV journalist is seen at the border between Turkey and Syria, in Akcakale, u015eanlu0131urfa province, southeastern Turkey, Tuesday, Oct. 8, 2019 (AP Photo)
by Daily Sabah with AA Oct 09, 2019 11:09 am

Donald Trump's critics disregard reality over Turkey's legitimate concerns about the U.S., as Ankara is preparing a cross-border peace operation against the terrorists in northern Syria and Washington is pulling troops in the process.

In an op-ed entitled "Turkey Has Legitimate Grievances Against the U.S.," published in The Wall Street Journal, Michael Doran, a senior fellow at the Hudson Institute, and Mike Reynolds, an academic at Princeton University, said labeling Turkey's objections to arming the YPG terror organization as 'anti-Kurdish' is ignorant.

"To dismiss Ankara's objections to America's arming of the YPG as mere anti-Kurdish bigotry is ignorant, akin to labeling the fight against al Qaida as Islamophobia," they wrote.

Referring to critics of Trump's decision to pull back U.S. troops from northern Syria, the academics said they disregard reality.

The op-ed highlighted that the YPG has substantial ties to the PKK terrorist organization, as then-Defense Secretary Ash Carter testified before Congress in April 2016.

The piece noted that criticizing Turkey's purchase of Russia's S-400 air defense missile system for being the main cause behind ruptured U.S.-Turkey relations is an oversimplification.

The op-ed listed three grievances of Turkey regarding its relations with the U.S.

"First, America's diffident Syria policy. Ankara followed Washington's lead in backing the Syrian people's attempt to overthrow the dictator Bashar Assad. But when Turkey shot down a Russian combat jet violating its airspace in 2015, President Obama treated the episode more as a bilateral spat between third parties than as a conflict between America's key regional ally and a more powerful adversary of U.S. interests. Left on its own, Ankara realized it had little choice but to accommodate Moscow. Vladimir Putin's steadfastness trumped Mr. Obama's aloofness."

They stated that this paved the way for the relationship that begot the S-400 deal.

For the second issue, they said Gülenist Terror Group (FETÖ) leader Fetullah Gülen's residence in the U.S. was defined by James Jeffrey, a former ambassador to Ankara, as "embarrassing" and added: "How, many Turks ask, can the U.S. harbor such a despicable figure?"

The piece depicted the third grievance as the "most consequential" as the Obama administration decided to arm and train YPG terrorists as well as embed U.S. special forces with them in 2016.

"Rather than work with Turkey, the U.S. chose to support the Syrian wing of the PKK, which the Turkish public holds responsible for decades of warfare and tens of thousands of deaths. The PKK represents a grave threat to the Turkish Republic, and Turks across the political spectrum loathe it."