Turkish military to save east of Euphrates from YPG terrorists 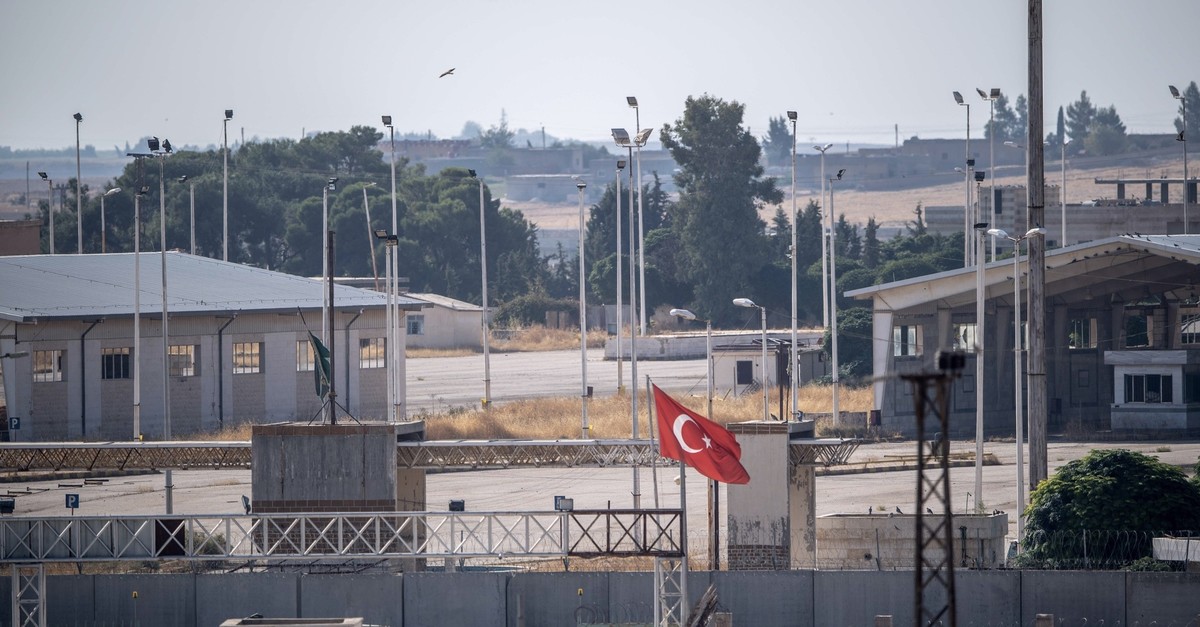 As preparations for a third offensive in northern Syria are being finalized, the Turkish military is ready to bring peace by clearing YPG terrorists from the region

A third operation in northern Syria is finally becoming a reality as it was announced Tuesday that the preparations by the Turkish military to clear the area of terrorist elements and bring peace to the border have been finalized. Turkey is ready for a possible military operation east of the Euphrates in Syria to establish a safe zone, the country's Defense Ministry said yesterday, following President Recep Tayyip Erdoğan's confirmation of a new offensive in the region. "Turkish security forces will never tolerate the creation of a terror corridor on our borders. All preparations for the operation have been completed," the ministry highlighted on Twitter, adding that the establishment of a safe zone is essential for Syrians' safety by contributing to stability and peace in the region.

Washington paved the way for the long-planned Turkish operation in the area east of the Euphrates against the PKK terrorist group's Syrian affiliate, the People's Protection Units (YPG), after the White House said Sunday the U.S. military would be withdrawing from northern Syria. The statement followed a phone call between Erdoğan and his U.S. counterpart President Donald Trump, during which a November meeting was planned, according to Turkish presidential sources. President Erdoğan confirmed Monday that U.S. troop withdrawal from northern Syria had begun and that the operation against the YPG was imminent before his departure to Serbia.

The Foreign Ministry also made a statement yesterday on the issue, saying that Turkey is determined to clear out terrorists east of the Euphrates, to protect its own survival and to establish a safe zone to ensure security, peace and stability in Syria. 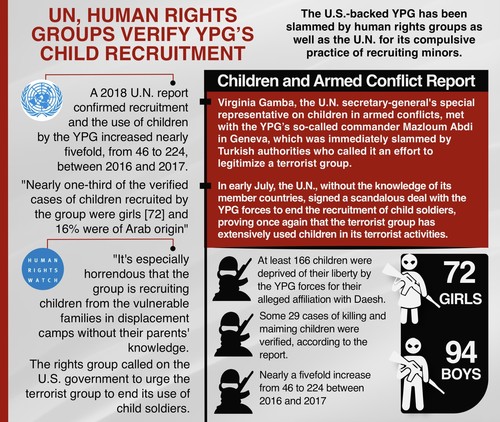 "A serious threat to the territorial integrity and unity of Syria will be eliminated and strong ground will be established to prevent the recurrence of the Daesh terrorist group and similar problems in the future," spokesman Hami Aksoy said in a statement. Meanwhile, Foreign Minister Mevlüt Çavuşoğlu and his Russian counterpart Sergey Lavrov yesterday discussed northeastern Syria over the phone. Çavuşoğlu and Lavrov discussed in detail the Syrian settlement process, paying particular attention to the situation in Syria's northeast, the Russian Foreign Ministry said in a statement. Turkish officials have been signaling a military campaign into the much larger YPG territory east of the Euphrates if the threat continues. High-level officials in Ankara have also been discussing plans to establish a safe zone in northern Syria free of YPG terrorists to ensure national security, even starting joint patrols with the U.S. military.

While the statements were pervading, it has been reported that Ankara sent troops and armored vehicles to the southeastern provinces of Şanlıurfa and Kilis, which border Syria.

The units were headed to reinforce Turkish military posts along the border with Syria, Anadolu Agency (AA) said. It is also reported that late on Monday trucks carrying tanks were headed to Şanlıurfa, which were to be moved closer to the border, adding that reinforcements have continued since Saturday. Amid the deployment, the Turkish military also started shelling the YPG in the local north Syrian town of al-Malikiyah, local sources reported late Monday. According to the sources, Turkish artillery shelled positions of YPG terrorists in the countryside of the border town of al-Malikiyah between Turkey and Syria in the north of Hasakah as a first move of the operation. The move came hours after the Turkish presidency submitted a motion to Parliament to extend the state's authority to launch cross-border military operations in northern Iraq and Syria for one more year.

The motion, submitted by the government, had previously allowed the Turkish military to carry out cross-border operations from Oct. 30, 2018 until Oct. 30, 2019. Turkey has long decried the threat posed from terrorists east of the Euphrates in northern Syria, pledging military action to prevent the formation of a "terrorist corridor" there.

Since 2016, Turkey has conducted two major military operations in northwestern Syria, operations Euphrates Shield and Olive Branch, to purge the region of terrorist groups Daesh and the YPG, which is the Syrian branch of the PKK terrorist organization. While Turkey was getting ready for the operation, the U.S. adopted a confusing stance toward Ankara, caused by the tweets of President Trump, which sent mixed messages both supporting and threatening the country. Turkey is not a country to act according to threats, the country's vice president said yesterday, responding to Trump regarding Turkey's planned safe zone operation.

"Turkey sets on its own way when it comes to its national security as President Recep Tayyip Erdoğan stressed," Vice President Fuat Oktay said, speaking at the 2019-20 academic year opening ceremony of Gazi University in the capital Ankara. "Turkey will never tolerate the creation of a terror corridor or a terror state on its border under any circumstances, regardless of its costs," Oktay said. "As I have stated strongly before, and just to reiterate, if Turkey does anything that I, in my great and unmatched wisdom, consider to be off limits, I will totally destroy and obliterate the Economy of Turkey (I've done before!)," Trump tweeted yesterday, despite acknowledging the country's operation only few hours before. The U.S. has redeployed only 50-100 troops in Syria's northern border as Turkish troops threaten to cross, a senior administration official said Monday, following Trump's tweets, denying reports that Washington was pulling out completely from the country.

Meanwhile, the U.S. military on Monday effectively shut Turkey out of airspace in northeastern Syria, taking a series of actions that reduced the possibility that Turkish jets could support a planned military operation there.

Pentagon spokeswoman Carla Gleason told reporters the Combined Air Operations Center has removed Turkey from the anti-Daesh coalition's air tasking order, the means by which it coordinates the flights of partner nations operating in the theater, and halted Turkey's access to surveillance information. She stopped short of saying that the airspace has been shut down to Turkey.

The YPG has been receiving U.S. backing under the pretext of fighting Daesh, although Ankara has been objecting to Washington's stance, saying that using one terror group to fight another makes no sense. With increasing U.S. weapons and material support, the YPG terrorists have tightened their grip on northern and eastern Syrian territories, posing a threat to Turkey's border security.

YPG TO COOPERATE WITH REGIME, RUSSIA

While the U.S. is still trying to save its relationship with the YPG through a wide range of Twitter messages, the so-called ally of Turkey seems to be ready to move on as reports claimed that they already gave a green light to the Syrian regime and Russia to hold negotiations.

Speaking to Reuters, a YPG terrorist said, "If America vacates the area and especially the border area for certain we, as a self-administration and as the [Syrian Democratic Forces] SDF, will be forced to study all the available options."

"At that time, we may hold talks with Damascus or the Russian side to fill the void or block the Turkish attack, so this may develop and there could be meetings and contacts in case of a vacuum," he said. The YPG is not only getting in touch with the U.S., but it is also getting ready to fight against Turkey. Footage obtained by AA yesterday showed that the terrorists covered the roofs and windows of some houses along the Turkey-Syria border. They used construction equipment and took up positions by setting up tarpaulins in a wooden area. The footage also showed some trucks coming from Rasulayn city center to the border area and unloading excavated soil.

The footage showed that despite Trump's remarks, the U.S. continued to deploy fresh military and logistics equipment to the YPG. The delivery, which was made through the Semelka border gate at the Iraq-Syria border, is evidence of continued U.S. support to the YPG terrorists. In the last week alone, the number of trucks that the U.S. dispatched to northern Syria has reached 600.

The news of an operation east of the Euphrates was welcomed by Turkish society as political parties stated that they will also side with the Turkish military no matter what, while condemning the U.S.' imbalanced stance. Yesterday, the main opposition Republican People's Party (CHP) leader Kemal Kılıçdaroğlu said that his party will support a motion in Parliament for an extension of military operations in Syria and Iraq. "Turkey has never bowed nor will it ever bow to any threat. Turkey, as a sovereign and independent state, will decide for its own sake on every issue," said Faik Öztrak, spokesperson of CHP, on Monday, criticizing U.S. President Donald Trump for recent remarks threatening Turkey for its imminent operation in northern Syria. Echoing Öztrak, the head of the far-right Good Party (İP), Meral Akşener, also said yesterday that the remarks by Trump do not comply with "state seriousness."

"[The remarks] are a paragon of insolence. Threatening the Republic of Turkey and the Turkish nation. I clearly say, it is a diplomatic scandal," Akşener told her party's parliamentary group. Akşener noted that "the alliance and friendship" were seriously damaged between the two countries by the threats. Trump threatened Turkey with economic collapse Monday should Ankara take any action in Syria he deems "off limits," ahead of a planned operation in the country's northeast. Trump wrote on Twitter on Monday that he will "destroy and obliterate the Economy of Turkey," if the country pushes its limits in the operation.

Akşener stressed Turkey should give an appropriate response to Trump's remarks by defeating terrorists in northern Syria.

"This is what our nation, and we, expect," she added.