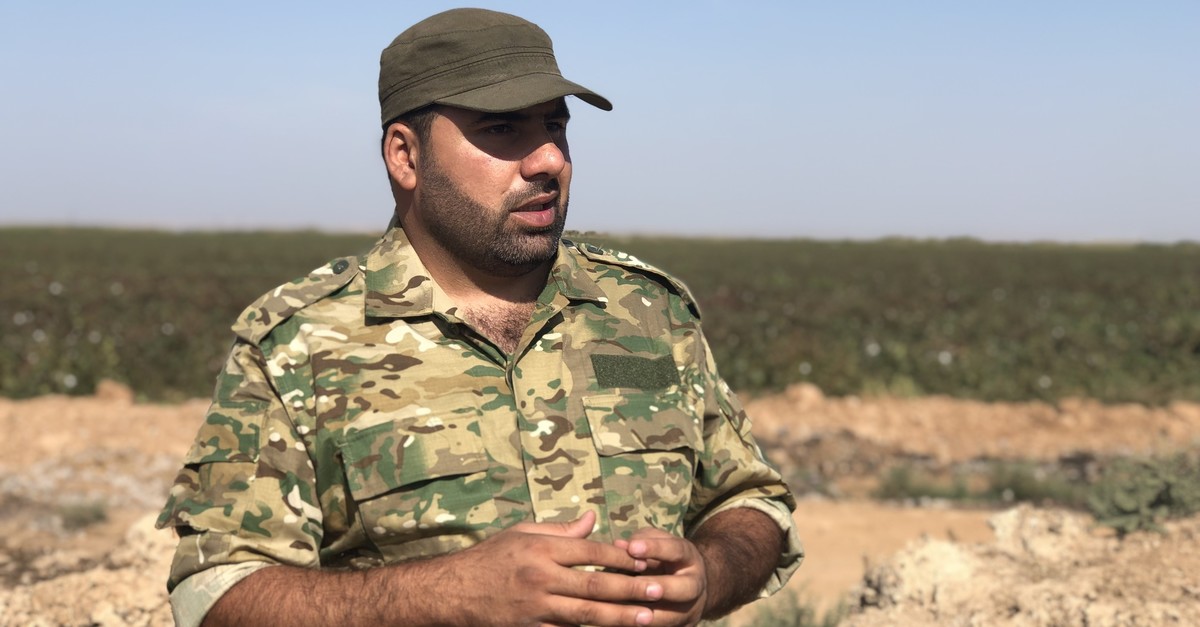 Syrian Kurds fighting alongside Turkey-backed Syrian National Army (SNA) are aiming to expel the PKK-affiliated People's Protection Units (YPG) from all parts of Syria to end the terrorist organization's oppressive rule of locals.

"Our people, our families are living in YPG-controlled areas, where the YPG treats them without justice, putting them in jail, forces them to serve in its militias… So now, people are calling for us to liberate them from this injustice," said Azad Shabo, a commander in the first division in the NSA and captain of Kurdish Brigade Azad.

"Our aim is to clear all the regions in Syria from terror," he emphasized.

Turkey launched Operation Peace Spring, the third in a series of cross-border, anti-terror operations in northern Syria targeting terrorists affiliated with Daesh and the YPG, on Oct. 9.

"The PKK claims to be nationalist but is bombarding its own people. On the other hand, we took many strategic points, cut strategic roads between Ras al-Ayn and Tal Abyad and Darbasiyah and we are hoping that they will withdraw from cities," he said.

The YPG's indiscriminate mortar attacks on civilian areas have killed many civilians so far. On Thursday, in southeastern Şanlıurfa district, three people, including a 9-month-old baby and an 11-year-old girl, were killed and 46 civilians were injured in mortar attacks. In another attack, YPG killed eight civilians and wounded at least 35 others on Friday evening in a single strike on the Nusaybin district of southeastern Turkey's Mardin.

Shabo added that SNA has seized many U.S. weapons since the beginning of the operation.

Since former U.S. President Barack Obama's administration, thousands truckloads of weapons were delivered by Washington to the terrorist group. Despite Washington promising to retrieve the weapons provided to YPG earlier, later remarks coming from the White House have changed and began to suggest that they cannot retrieve all of the weapons, which, according to Ankara, may be eventually transferred to the PKK to be used in its terror campaign against Turkey, which has already nearly 40,000 lives.

Shabo stressed that the YPG uses forced conscription and recruits people aged between 16 and 60 as soldiers, and "has been doing (so) since Operation Olive Branch."

"Many Arabs, Kurds, Turkmens do not want to be part of this war. On the contrary, they are happy to see us coming. So the YPG takes them, pushing them to the front lines, and uses them as human shields," he said.

Locals in YPG-controlled areas have long suffered from YPG atrocities since the terrorist organization has a lengthy record of human rights abuses, ranging from kidnappings of suspected persons, recruiting child soldiers, torture, ethnic cleansing and forced displacement in Syria.

Syrian Kurdish groups also declared their support on Friday to Turkey's Peace Spring operation by pointing out to the YPG oppression.

"Many people from Arab and Kurdish regions captured by terror groups have been forced to migrate in recent years. Many Kurds were arrested, and human rights in the region have been violated, which reminded us dictatorship and discrimination carried out by Assad regime during Baath rule," Syria's Independent Kurdish Association and Kurdish National Action Front said in a joint statement.