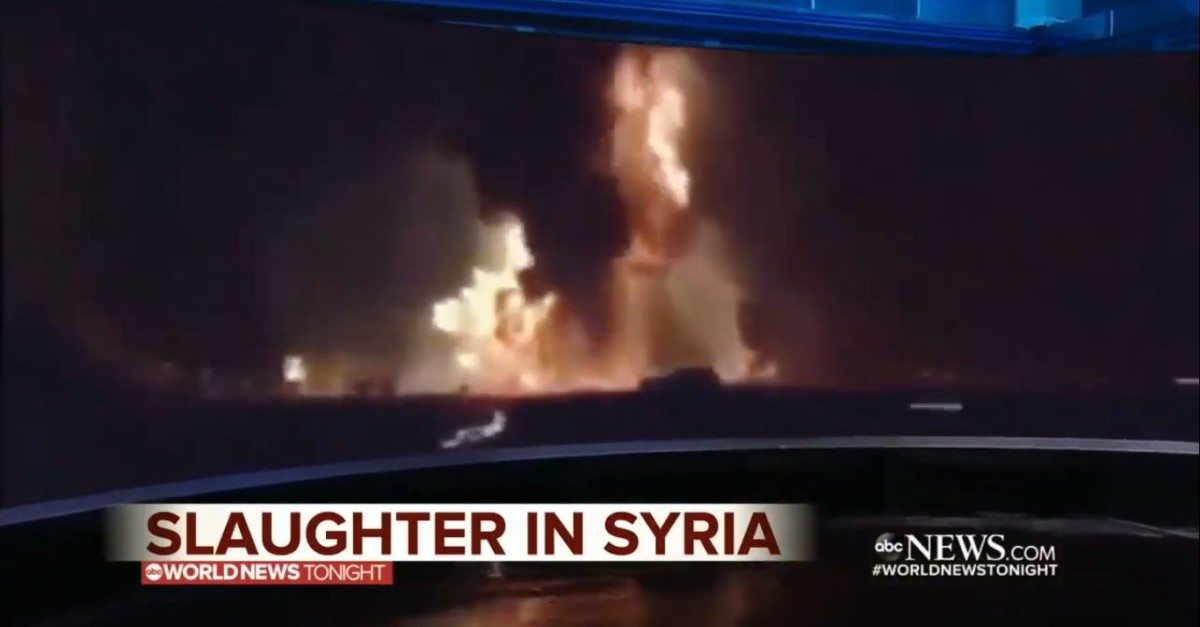 ABC News is under fire for airing a video that purported to show a Turkish attack in northern Syria against civilians amid Turkey's Operation Peace Spring, when in fact it was from a 2017 military gun show in Kentucky, the U.S.

The shocking footage of explosions quickly attracted attention on social media, but soon after people started to question the video's authenticity.

Social media user Wojciech Pawelczyk was the first express doubt and point out uncanny similarities with a video from two years ago.

Quick research revealed that the original clip was uploaded to YouTube in 2017. Titled "Knob Creek night shoot 2017", the video is from a biannual nighttime event called the "Military Gun Shoot & Military Gun Show" held at a gun range in the town of West Point, Kentucky.

When the two videos are compared side by side, ABC's version also seems to be edited, less saturated and more blurry.

ABC News has since issued an apology and correction, saying they had taken down the video in question from their site and Youtube "immediately after questions were raised about its accuracy."

There have been similar defamation and manipulation efforts on social media ever since August 2016 when Turkey launched Operation Euphrates Shield, its first cross-border anti-terror operation in northern Syria targeting terrorists affiliated with Daesh and the PKK's Syrian offshoot the People's Protection Units (YPG). The same smear campaigns continued during Operation Olive Branch, launched in January 2018, as well as the still ongoing Operation Peace Spring, which was launched on Oct. 9, 2019.

Supporters of the PKK and YPG have been posting countless manipulated and doctored photos from the Syrian conflict and other disasters to mislead the international community and hurt the Turkish military's image.

In response to the fake video, U.S. President Donald Trump lashed out Monday at ABC News for using a video from a Kentucky gun range and falsely claiming it as footage of Turkey bombing Kurdish civilians in Syria.

"A big scandal at @ABC News. They got caught using really gruesome FAKE footage of the Turks bombing in Syria," Trump said on Twitter. "A real disgrace."

"Tomorrow they will ask softball questions to Sleepy Joe Biden's son, Hunter, like why did Ukraine & China pay you millions when you knew nothing? Payoff?" Trump added.

Sadık Arslan, the permanent representative of Turkey to the U.N.'s Geneva office, hosted journalists from international news outlets to inform them regarding Turkey's Operation Peace Spring.

Arslan expressed his discomfort about the international media publishing manipulative and one-sided news about the operation.

He said the YPG and PKK terrorists targeted civilians and journalists on the Turkish side of the border with mortars and snipers, but foreign media journalists located there failed to report properly that these terrorists were the ones who conducted the attacks.

Arslan said the YPG and PKK has conducted hundreds of attacks against residential areas in Turkey since the start of the operation and 18 civilians have been killed, including a 9-month-old baby.

He also criticized reports which claimed that Turkey is fighting against the Kurds.

Turkey has the largest Kurdish population in the world, Arslan said, adding the country does not have any problems with the Kurds and the operation is only being conducted against the YPG and PKK terrorists.

He said Turkey had opened its doors to Kurds from Syria's northern city of Ayn al-Arab in 2014 when it was besieged by Daesh.

Around 200,000 people, mostly Syrian Kurds, had fled to Turkey then while the siege was ongoing.

Arslan said Turkey was also the only country to welcome hundreds of thousands of Kurds from northern Iraq when Iraq's former leader Saddam Hussein attacked them with chemical weapons.