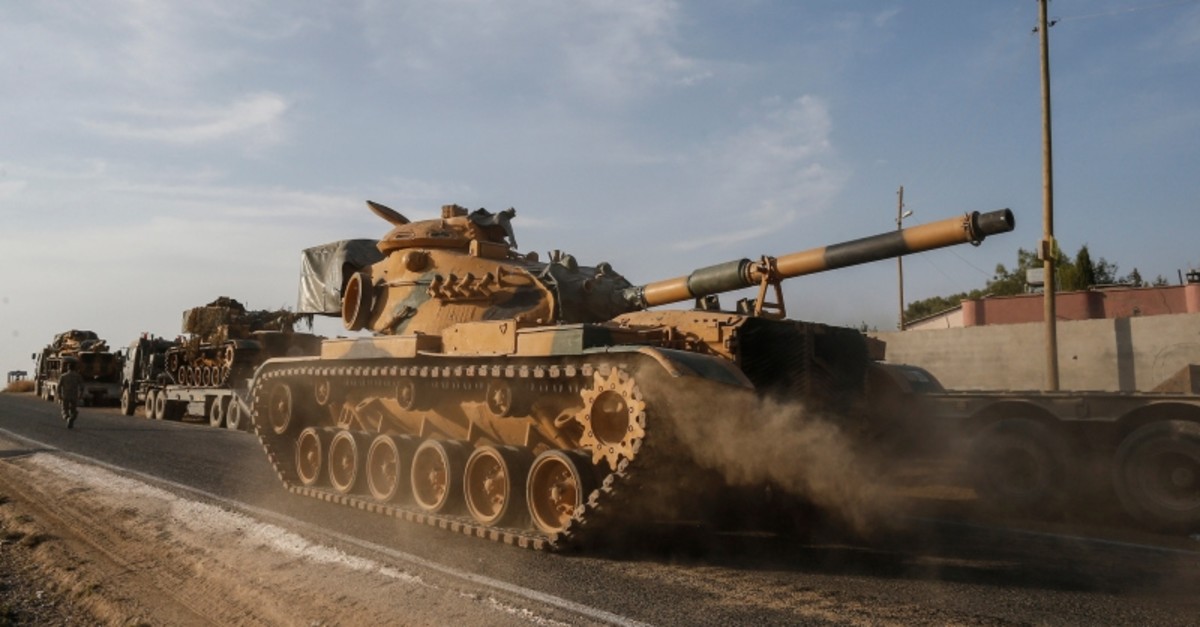 A Turkish forces tank is driven to its new position after was transported by trucks, on a road towards the border with Syria in Sanliurfa province, Turkey, on Monday, Oct. 14, 2019. (AP Photo)
by Anadolu Agency Oct 15, 2019 9:48 am

In an article he penned for The Wall Street Journal, Erdoğan said no country has felt the pain of the ensuing humanitarian crisis more severely than Turkey since the Syrian civil war began in 2011.

"At a certain point, Turkey reached its limit," he said, adding that the world ignored Turkey's repeated warnings of its inability to tackle the problem of caring for more than 3.6 million Syrian refugees without international support.

Turkey on Wednesday launched Operation Peace Spring east of the Euphrates River in northern Syria to secure its borders by eliminating terrorist elements and to ensure the safe return of Syrian refugees and Syria's territorial integrity.

Ankara's main target in the operation is the PKK terror group and its Syrian offshoot, the People's Protection Units (YPG).

In its more than 30-year terror campaign against Turkey, the PKK — listed as a terrorist organization by Turkey, the U.S. and the European Union — has been responsible for the deaths of 40,000 people, including women, children and infants.

Erdoğan asserted that Turkey has no problem with any ethnic or religious group in Syria.

"From our perspective, all citizens of the Syrian Arab Republic — who don't belong to terrorist groups — are equal. In particular, we object to the equation of the PKK with the Syrian Kurds," he wrote.

The president said Ankara will ensure that no Daesh members incarcerated in the region escape, expressing Turkey's readiness to work with source countries and international organizations on the rehabilitation of foreign terrorist fighters' spouses and children.

In the article, Erdoğan also slammed several European countries for their failure to stop the influx of foreign terrorist fighters in 2014 and 2015.

"Perhaps the government of a certain European country, which I won't name, would like to explain to the world how one of its nationals could board a flight to Istanbul in 2014 with live ammunition in his checked luggage.

"Likewise, France has blocked weapons sales to Turkey, but why did it ignore our repeated early warnings about imminent terrorist attacks?" he added.

In retort to the Arab League's criticism of the Turkish operation, Erdoğan said its statements do not reflect the true views and sentiments of the Arab people. The Arab League "has no legitimacy," he said.

"Since they are so unhappy with Turkey's efforts to reunite Syrian refugees with their ancestral lands, how many war victims have they admitted?

"How much did they contribute to efforts to end the humanitarian crisis in Syria? Which political initiatives did they support to stop the civil war?" Erdoğan said.

The president said the international community failed to prevent the Syrian crisis from pulling an entire region into a maelstrom of instability, adding that many countries have had to deal with the conflict's negative side effects, including irregular migration and an uptick in terrorist attacks.

"Operation Peace Spring represents a second chance to help Turkey end proxy wars in Syria and restore peace and stability to the region.

"The European Union — and the world — should support what Turkey is trying to do," the president concluded.