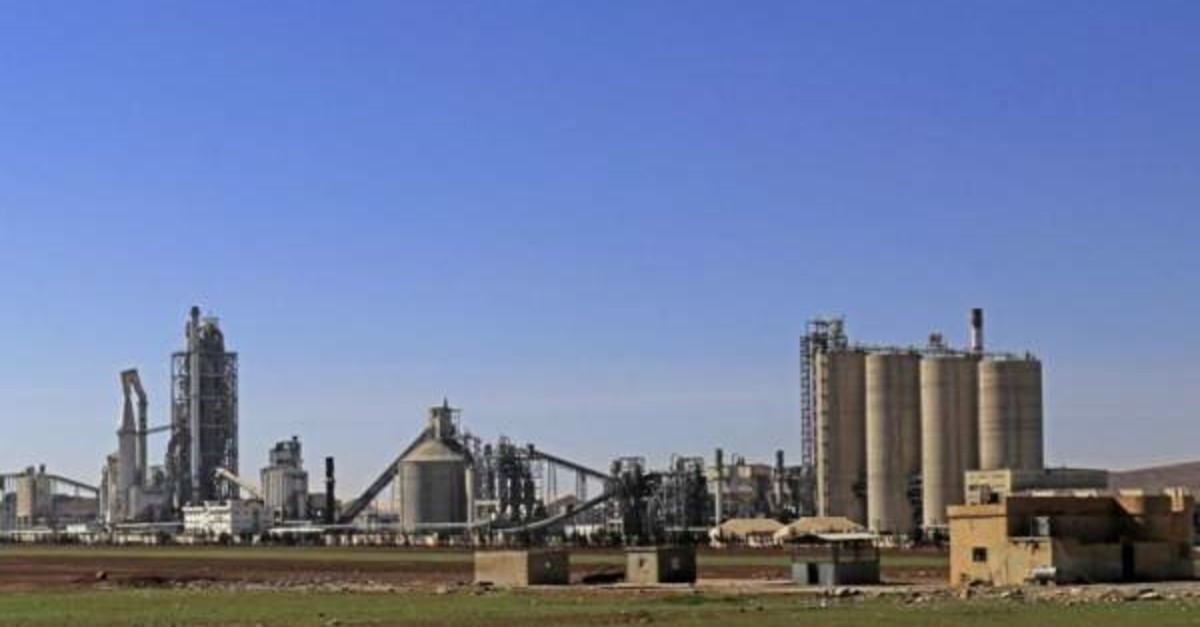 The dubious case of French cement giant Lafarge's plant in northern Syria requires an explanation as it has significant security repercussions for Turkey. (AFP Photo)
by Oct 16, 2019 11:24 pm

The French cement producer Lafarge's plant in northern Syria continues to pose security threats for Turkey as it is currently a base controlled by the YPG terror group. It has raised the suspicion of Turkish authorities about the sources of YPG-built infrastructure

The French cement maker Lafarge’s dealings with terror groups including Daesh and the People's Protection Units (YPG), the Syrian offshoot of the PKK, have been not been secret since company officials were charged but not sentenced over their payments and engagement with terror groups. Turkey’s ongoing anti-terror operation in northeastern Syria have once again revealed the security threats which arise when terror groups usurp infrastructure and manufacturing facilities.
In a speech at the Parliament yesterday, President Recep Tayyip Erdoğan once again censured the vast amount of ammunition and heavy weapons provided for the YPG by Turkey’s allies, particularly the U.S. He also raised another important risk for Turkey’s national security – as the YPG is not only equipped with arms and ammunition but significant facilities such as Lafarge’s vast plant in Jalabiya, a town located close to Ayn al-Arab, which is used as a base and manufacturing site for the group.
“We are seeing 90 kilometer-long tunnels in northern Syria. How do they build these tunnels? Where is the cement to construct them coming from?” the president asked. “The cement for the tunnel construction comes from Lafarge’s plant in the region, a French firm,” he said, demanding an explanation from France, another one of Turkey’s allies in NATO.
The issue of tunnels and towers and how they were built by the YPG came up during Turkey’s previous military engagement, Operation Olive Branch, into Afrin in early 2018. Turkey has repeatedly asked the question: where did the YPG militia receive the cement to build hundreds of kilometers of tunnels along the Turkish border?
Sources in the region previously confirmed that the YPG began the construction of these tunnels a couple of years ago, after they took control of the plant from Daesh in February 2015 with the help of a U.S.-led coalition.
Since the plant is conveniently located between Raqqa and Manbij, two cities that were captured from Daesh by the YPG – with the immense military support of the U.S. – and are now controlled by the U.S.-trained and supported YPG. Raqqa, which is located 90 kilometers away from the factory, was captured by Daesh in June 2013, and the city of Manbij, which is 65 kilometers from the factory, where most of the factory's employees were based, fell to Daesh in March 2014.
Payments to terror groups
Lafarge kept running its cement factory plant in northeast Syria until 2014 despite the region being conflict-ridden and controlled by various armed and terrorist groups
In an environment of war, Lafarge insisting on keeping operations at the company's Jalabiya plant, which was first protected by Syrian regime forces. During the war as the region changed hands between Daesh and the YPG, factory officials paid these terror groups for protection.
Several diplomatic memos obtained during 2014 acknowledge that Lafarge was at the mercy of the "balancing act between the Damas [Damascus] regime, Kurdish forces and the Islamic State."
According to a Lafarge internal inquiry, between 2011 and 2013, the group paid around $5.5 million to terrorist groups such as the YPG, Al-Nusra Front and Daesh in order to guarantee Jalabiya’s cement production and supply in the region. According to a judicial inquiry by French courts, Lafarge gave around $15.3 million to various militias between 2011 and 2015.
While company officials were charged with financing Daesh terrorists, and the plant reportedly ceased production in 2014, there are still a couple of questions that French politicians, the judiciary, Lafarge authorities and the U.S.-led coalition forces must answer. Some of the charges against former officials were dropped in March 2019 and June 2019. However, the Court of Appeal in Paris will decide on Oct. 24 whether charges of financing terrorism and crimes against humanity will be upheld.
Lafarge and its former executives Bruno Lafont, former CEO of Lafarge, former Safety Director Jean-Claude Veillard and one of the former directors of its Syrian subsidiary Frederic Jolibois have challenged the indictments, according to Agence France-Presse (AFP). According to several sources, new findings and evidence reveal the company’s dealings with terror groups and another case will be opened this month.
Last Update: Dec 20, 2019 1:05 am
RELATED TOPICS